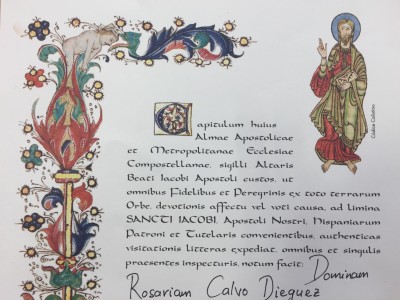 What is the Compostela? Is it the same as the Credential? And what’s a Compostelana? There are many questions pilgrims ask themselves when they embark on the Camino de Santiago for the first time. And one of the most common has to do with the Compostela: what is it? What is the meaning behind it? Where can I get one, and what do I do with it? Today we will try to answer some of these questions so that you can enjoy the Camino with all the information you need.

What is the Compostela?

The Compostela (sometimes incorrectly called a “Compostelana”) is the document that certifies that a pilgrim has completed the Camino de Santiago. The Compostela is awarded by the Church authorities, and can be collected at the Pilgrim’s Reception Office in the Cathedral of Santiago de Compostela. This accreditation was created in the 9th and 10th centuries when the pilgrimage to the tomb of Saint James the Apostle was given official status. At first, insignias such as the venera or scallop shell were used to certify the pilgrimage. But these were easy to falsify, and in the 13th century the Church decided to replace them with the so-called cartas probatorias or evidentiary letters, which are the direct predecessor of today’s Compostela.

So what is a Compostelana?

There is no such thing as a Compostelana! When people refer to the Compostelana, they really mean the Compostela. This incorrect name of unknown origins has become widespread in popular Camino culture. But as good pilgrims we should call things by their proper name and, as we have said, the document that certifies our pilgrimage is called the Compostela.

What do I have to do to get a Compostela?

In order to get a Compostela, a pilgrim must fulfil three basic requirements: they must have taken the Camino for spiritual or religious reasons; they must have completed at least 100 km by foot or on horseback, or 200 km by bicycle, on any of the routes that make up the Camino. And they must be able to accredit the distance covered. 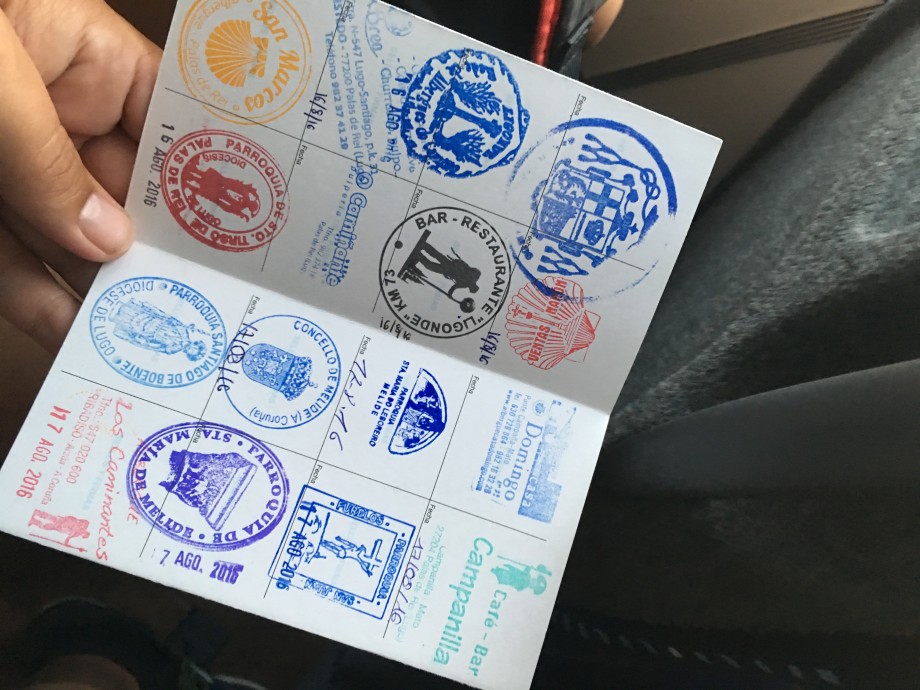 To fulfil these requirements, pilgrims must carry with them a document that many get mixed up with the Compostela: the Pilgrim’s Credential (or Passport). As we explained in a previous blog, the Credential is the document that accredits our status as pilgrims. The Credential is an individual, non-transferable document that can be obtained from the various Friends of the Camino de Santiago associations, hostels, parish churches, and religious guilds of the Apostle Saint James (Cofradías del Apóstol Santiago).

Pilgrims must get their Credential stamped in the towns they pass through to show that they have completed the minimum kilometres required. These stamps can be obtained in hostels, Friends of the Camino associations, churches and other places such as town halls, cafes or Correos post offices. Your Credential can have as many stamps as you like, but to receive the Compostela, Santiago Cathedral requires a minimum of two stamps per day during the last 100 km for pilgrims on foot or horseback, and during the last 200 km in the case of cyclists.

Where should I start the Camino de Santiago if I want to get the Compostela?

For pilgrims travelling by bike, the minimum distance is set at 200 km. That means that cyclists who decide to take the French Route should start, as a minimum, in Ponferrada; in Póvoa do Varzim on the Portuguese Route; in Tapia de Casariego on the Northern Route; Grandas de Salime on the Primitive Route, and A Gudiña on the Sanabrés or Via de la Plata routes.

How to collect the Compostela?

The International Pilgrim Reception Centre, the place in Carretas Street where the Compostela (commonly and erroneously called Compostelana) is handed out, has the following opening hours: from 9:00 am. to 7:00 pm (closing time can be brought forward up to 60 minutes earlier depending on the number of pilgrims). We remind you that the Pilgrims' Reception Office is closed on 25 December, Christmas Day, and 1 January, New Year's Day.

During these hours you can visit the centre and request the Compostela after certifying that you have completed the Camino by showing the Pilgrim's Credential. Here are the steps to follow to collect it: 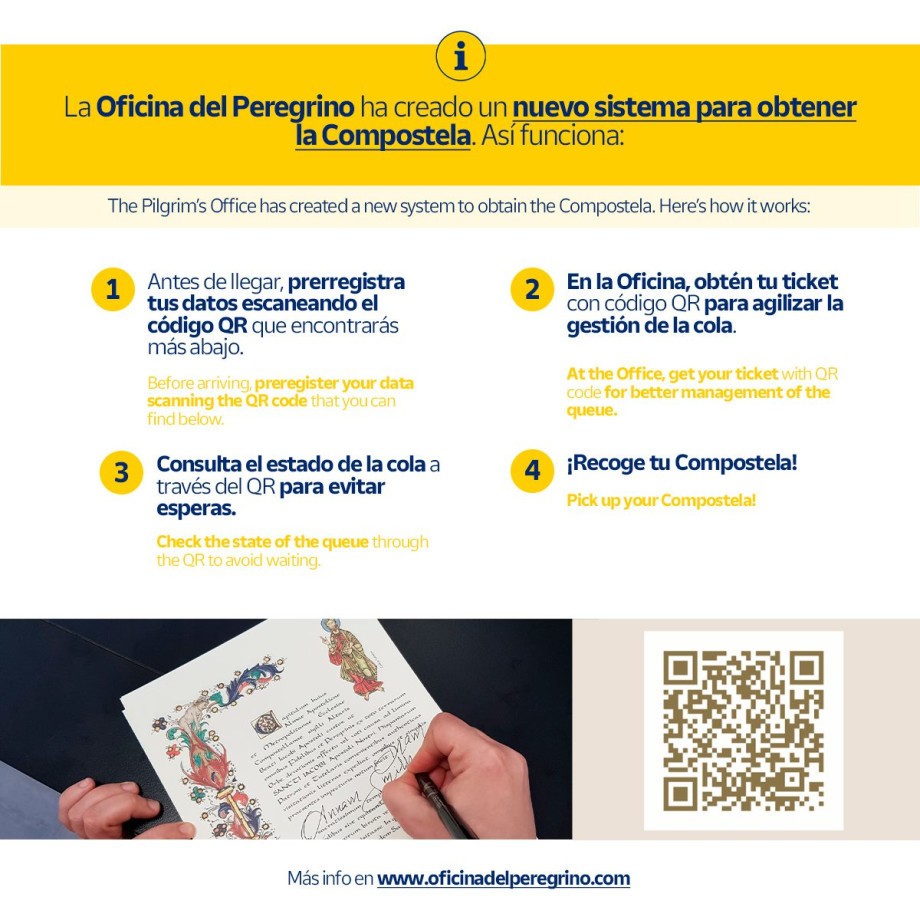 Can children be awarded the Compostela?

Of course they can! According to the Cathedral’s rules, children that take the Camino de Santiago and have taken Communion or are old enough to understand the spiritual nature of pilgrimage can receive the Compostela. If they are too small, the Santiago Cathedral will give them a special certificate bearing their name. Babies are included on the Compostela of their parents or accompanying adult.

Apart from the Compostela, are there any other Camino de Santiago certificates?

There are other certificates apart from the Compostela available to people who have completed the Camino de Santiago. Here’s a quick summary of those certificates: 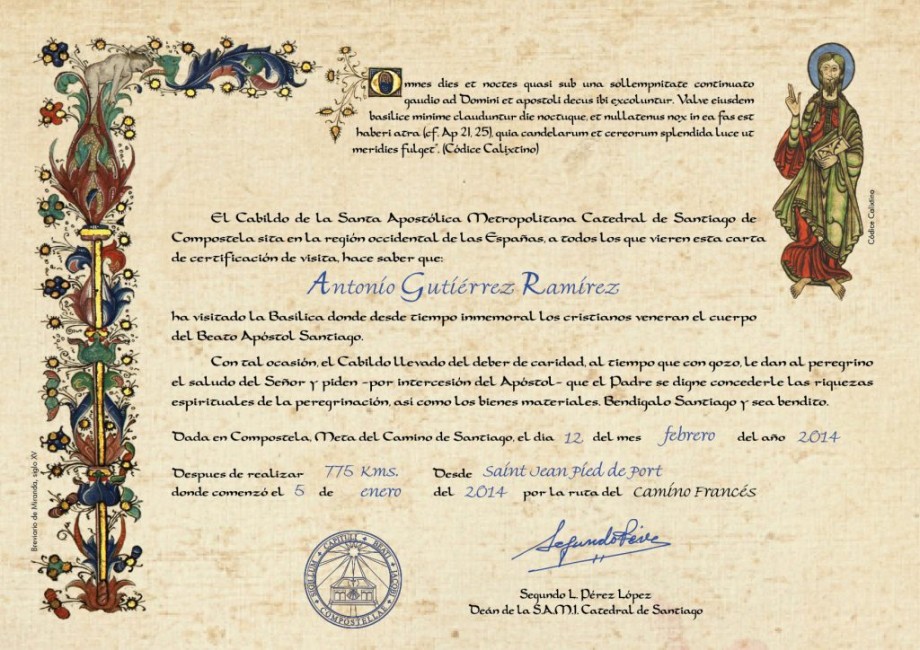 Distance Certificate. Apart from the Compostela, the Pilgrim’s Reception Office gives all pilgrims that request one a Distance Certificate, a document accrediting the number of km covered, wherever your pilgrimage began. It shows the date and point you started, the km covered, the date you arrived in Santiago and the route taken. Pilgrims that have undertaken a pilgrimage in the past can also request one by writing to: certificadodedistancia@catedraldesantiago.es. 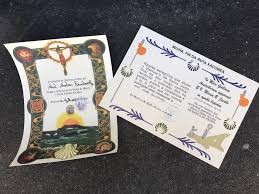 Fisterrana and Muxiana. Pilgrims that decide to extend their route to Finisterre or Muxía – or simply choose that route in the first place – can obtain a certificate for their pilgrimage. To do this, they should continue to get their Credential stamped up to their destination – if there’s space – or get a new Credential. It works in the same way as the Compostela: you need to get two stamps per day as evidence of your journey along each stage. Then the Finisterre Hostel or Muxía Tourist Office can issue you with this certificate.

Traslatio Xacobea. This is the document that proves that you have undertaken the Traslatio, a sea/river route which follows the original route taken by the boat carrying the remains of the Apostle when it reached the Galician coast. The Traslatio Xacobea certificate is issued by the Fundación Xacobea and Town Council of Padrón to all boats and their passengers that can demonstrate that they have taken this route, which goes from the Port of San Vicente do Mar (in O Grove) or Ribeira to Padrón. 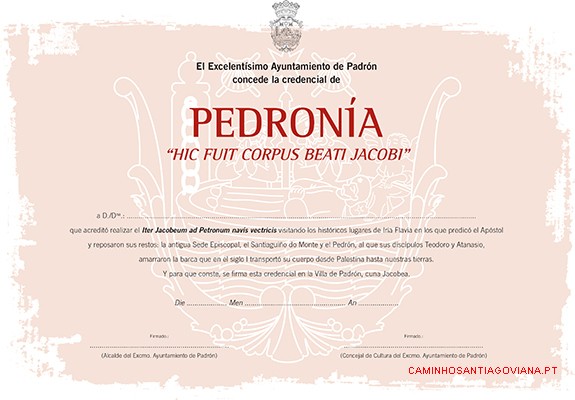 Pedronía. According to legend, the town of Padrón is the spot where the remains of the Apostle arrived in Galicia, and it has its own certificate: the Pedronía. To get this certificate, pilgrims must travel a minimum of 18 km to Padrón from Santiago or any other location on the Ría de Arousa following the sea/river route. They must also have visited the most important places linked to the Apostle in that town: the Parish Church of Santa María de Iria Flavia, a former Episcopal See; the Fuente del Carmen, decorated with depictions of the Traslatio and the baptism of Queen Lupa; Santiaguiño do Monte, where the Apostle gave a sermon; and the Pedrón, the stone where the boat bringing the Saint’s remains from Palestine was moored, housed in the Parish Church of Santiago de Padrón.