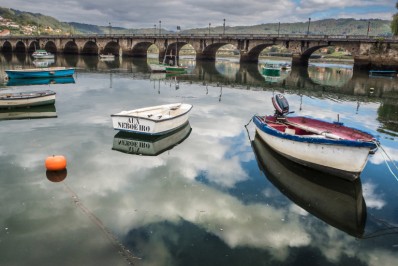 The English Way, also called the Irish Way, is the first historical maritime itinerary to Santiago de Compostela.
The ports of Ferrol and A Coruña, current starting points of the English Way, received from the 12th to the early 15th century a growing number of European pilgrims, mostly British, Scottish and Irish. They embarked on merchant ships to the lands of the Apostle Santiago and, once in Galicia, began the pilgrimage by land.

The English Way from Ferrol to Santiago stretches for 122km that are divided into 5 stages. The other option is to start the English Way in A Coruña, a 72 kilometers route that is usually covered in 3 stages. From the Herculean city, the pilgrim can recall from the Tower of Hercules the arrivals of the first boats with pilgrims from all over Europe.

The itinerary from Ferrol goes through Narón, Neda, Pontedeume and Abegondo, to Mesía. In the town of Hospital de Bruma the pilgrims who come from A Coruña come together, a shorter itinerary, to continue together through Ordes, Mesón do Vento and Oroso to Santiago de Compostela.

Although the English Way from A Coruña does not meet the requirement of traveling the last 100 kilometers to Santiago, the Compostela is achieved. To do this, the pilgrim must complete the 100 kilometers, making the difference in their region of origin.

As for the inhabitants of A Coruña, they can also get hold of Compostela by visiting the Jacobean spaces of the city. In case these conditions are not met, the pilgrim will receive a document certifying his pilgrimage and his visit to the tomb of the Apostle in the Cathedral of Santiago.

Good signage and network of hostels
The English Way has undergone a major revitalization in recent years. Among the main reasons, its indisputable beauty, good connections with its starting points (both by plane and by train or bus) and an improvement in the provision of services.

It is a journey that combines the sea and the Galician mountains and passes through such beautiful towns as Pontedeume or Betanzos. In addition to enjoying the cultural and artistic heritage, the pilgrim who chooses the English Way can visit places of extraordinary natural value such as the Fragas do Eume or savor some of the most traditional dishes of the area such as the Betanzos omelette.

The signs are correct, with the yellow arrows and the classic landmarks that can be seen in much of the Camino de Santiago.

A few years ago, the network of accommodation along the English Way was somewhat scarce. The public shelters were the only ones that existed on the Route (three) and in the winter months it was somewhat more difficult to find accommodation. Today it is not the French Way but the English Way has become a well-equipped itinerary. A score of hostels, between public and private, dot the Route. It also has an abundant number of hotels, hostels, pensions and rural houses. In addition, the Correos backpack transport service is available on the Camino Inglés, from Ferrol to Santiago de Compostela.

Regarding the level of difficulty, we can place the English Way in an intermediate position. It is not as hard as the Pimitive Way or as simple as the Portuguese Way. Perhaps the most difficult parts of the Camino are found at the exit from Pontedeume and on the stage that separates Betanzos from Hospital de Bruma.

Pilgrimages since the 12th century
The history of pilgrimages on the English Way dates back to the 12th century. A crusader squad made up of English, Flemish and German visited the tomb of the Apostle Santiago in 1147. Their final destination was the Holy Land but, after helping in the conquest of Lisbon, the Knights Templar for Santiago to pray to the Apostle.

The break of the British monarch Henry VII with the Catholic Church in the 16th century began the decline of this Route, which today is experiencing an authentic revitalization. And the fact is that there are numerous scenic, historical and artistic attractions that the English Way offers to those who venture through it.

Other smaller ports were the destination of these maritime pilgrimages such as Ribadeo or Muros and Noia, which for a few years have been promoting their land route under the name of 'Portus Apostoli'. In addition to the pilgrims from the British Isles, Scandinavians, Flemings, Baltics and the French from the north also made this Way, in sea crossings loaded with inclement weather.

The English Way under sail
The English Way is also the continuation of the Sailing Way. Those pilgrims who come on pilgrimage by sea have their destination in A Coruña, in the port of A Coruña. From there they will continue on foot to Santiago.

This pilgrim's route by sea known as “Navigate the Way” establishes a requirement to carry out one hundred miles of sailing and travel the last stretch on foot, from Monte do Gozo to Obradoiro, to receive the Compostela. Those pilgrims who have decided to do the Camino in a boat will be able to collect the credential in 17 ports distributed along the coast of the Northern Way and the Galician coast.

How to get to the starting point?
Ferrol
Pontedeume