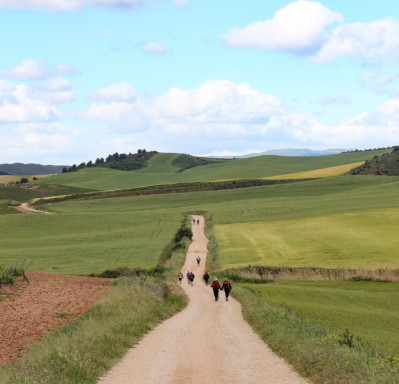 Thousands of people who were planning to walk the Jacobean Routes this 2020 have been forced to cancel or postpone their Camino. So is shown by the data coming from the Pilgrim’s Office, that has registered a total of 40.005 pilgrims since the “reopening” of the Camino back in July, versus the 161.786 pilgrims registered during 2019.

We’re talking about 75% less pilgrims throughout this summer (July, August and September). Although it is true that not all pilgrims make it to Santiago, especially this year in which the trend has been to opt for shorter and nearer routes, the data from the Pilgrim’s Office gives us an idea of what the coronavirus crisis has entailed for the jacobean world.

After several months with the Routes totally empty, August has become, once again, the month with the greatest flow of pilgrims. A total of 19.812 pilgrims collected their Compostela in Santiago. A number that, nonetheless, is far from the 63.814 that made it to Santiago in August of 2019.

The border closure and the difficulties to travel from different countries have led to the majority of pilgrims this summer being Spanish. Other europeans have also dared to walk the Routes, primarily pilgrims from closer countries such as Portugal, Italy, Germany or France, although the numbers are pretty much symbolic compared to previous years.

The Camino Francés, the most popular Route

When it came to choosing a Route, the answer has been unanimous. Over 50% of the pilgrim that made it to Santiago these months opted for the Camino Francés (French Way), the most popular Route leading to Compostela.

In second place we can find the Camino Portugués (Portuguese Way) and, quite far away, the Camino del Norte (Northern Way), Camino Primitivo (Primitive Way) and the Camino Inglés (English Way).

If we look at the starting points of the Camino we can see that during this weird 2020, pilgims have opted for proximity routes, most of them starting in Sarria or Tui.

Coronavirus seems to have caused a change in trend when it comes to gender. Last year it was mostly women in the Camino de Santiago. However, this year it has been the other way around, with a difference that hadn’t been seen for years on the statistics: a 54,1% of men versus a 45,9% of women.

With October coming up and the presence of various sprouts in differents points of the Jacobean Routes, the number of pilgrims until the end of the year is pretty much expected to be symbolic. Nevertheless,  at Correos we are keeping up our Paq Bicicleta, Paq Peregrino and Lugagge-storage in Santiago, as well as the Paq Mochila from Sarria to Santiago.

All eyes are set now on 2021, when we will celebrate a new Holy Year after 11 years without doing so. The return of pilgrims to the different Jacobean Routes will depend greatly on the evolution of the pandemic worlwide.

In the meantime, the Xunta de Galicia is already thinking about extending the Xacobeo to 2022 hoping that a greater number of pilgrims will be able to enjoy the Jacobean experience.