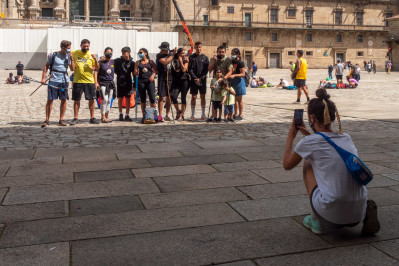 2020 has been a very different year in the Camino de Santiago. The emergence of Covid-19 has turned the lives of millions of people around the world completely upside down. And its presence was also noticed in the Jacobean Routes.

Today we take stock of this 2020, a year in which the Camino was empty for months, albergues and other accommodation were forced to close their doors and the number of pilgrims who made it to Santiago and picked up their Compostela barely reached 50.000.

2020 will be remembered by millions of pilgrims around the world with one image in mind: the Camino de Santiago completely empty. Since March, the spread of Covid-19 and the mandatory lockdown led to empty Jacobean Routes. For the first time in centuries, not even one pilgrim was able to walk towards the tomb of the Apostle.

This situation results in a drastic decrease in the number of pilgrims who made it to Santiago. According to the data provided by the Pilgrim’s Office, a total amount of 54.129 people collected their Compostela after doing the Camino de Santiago in 2020, 84% less than 2019.

Used to achieving record figures year after year, this is a most unusual number.  Especially if we look at the predictions for 2020, when over 350.000 pilgrims were expected.

Worst of all is the delicate status of most albergues and establishments related to the Camino de Santiago. The lockdown first and then having to comply with the necessary safety measures forced many places to close down or considerably decrease their capacity.

This 2021, with the expected improvement of the health situation and the celebration of Xacobeo 2021 – 2022, will be the key to the recovery of the great Jacobean host network that has been built over the years.

The Camino Francés, the most popular Route

Despite the changes that came with coronavirus in the Camino de Santiago, such as the impossibility to share meals or gathering with other pilgrims at albergues, there were no changes regarding which Route to choose.

The Camino Francés was, once again, the most popular Camino de Santiago. Around 53% of pilgrims who collected their Compostela opted for this historical Route. Sarria was the preferred starting point for this Camino, followed by Saint Jean Pied de Port and León.

When it comes to starting points, Sarria remains as the most popular one. Up to 27,5% of pilgrims chose this locality in Lugo to walk the last 100 kilometers of the Camino Francés leading to Santiago. After Sarria come Tui and Oporto (Camino Portugués and Camino Portugués por la Costa), Saint Jean Pied de Port (Camino Francés), Ferrol (Camino Inglés) and Oviedo (Camino Primitivo).

The Camino de Santiago has always been known for being a universal Route. Considering past years’ statistics, 55% of all pilgrims used to be foreigners, and 45% Spaniards.

The trend has considerably reversed in 2020 due to travel restrictions. 70% of pilgrims who collected their Compostela this year were Spanish, and coming from five main Autonomous Communities: Andalucía, Madrid, Comunidad Valenciana, Cataluña and Galicia.

Another difference compared with the past years can be found in the chosen means to do the Camino de Santiago. Most pilgrims (91,5%) did it on foot, walking being the favourite way of travelling the Routes. There are many reasons for that, the main one being the ability to really take in the essence of the Camino, at the same time as enhancing that inner journey that many pilgrims are aiming for in the Route.

However, the increase in the number of pilgrims who decided to do the Camino de Santiago by bike this year is quite notable. During 2020, a total of 8,3% of all people who collected their Compostela had cycled the Camino, compared to the 5,6% registered in 2019.

After such a hard year for the Camino de Santiago, it is now time to set our eyes on this very especial Holy Year. After the extension was approved by the Pope, the 120th Xacobeo in history will take place during 2021 and 2022, with hopes that pilgrims from all over the world can come back to the Camino de Santiago and albergues can open their doors once again.

*The image illustrating this article belongs to Manuel G. Vicente.