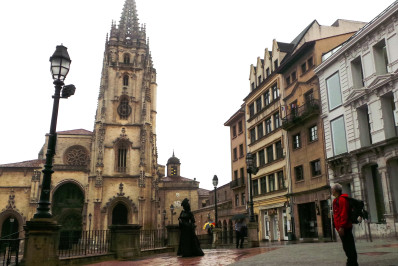 The Camino Primitivo (The Original or Primitive Way) is the oldest of all the Caminos: this is the first historic route of which there is a written record. This was the route followed by King Alfonso II the Chaste in the 9th century to visit the tomb of Saint James, which had just been discovered.

This visit to the tomb of the Apostle marked the launch of the Camino de Santiago and the devotion of Alfonso II, nicknamed the Chaste, helped to establish the cult of the Saint. After this first pilgrimage to Compostela, the monarch ordered the construction of a church, the first dedicated to Santiago, and financed the monastery of San Paio de Antealtares. To this day, the original layout of this route is maintained, which year after year gains followers.
Where does the Camino Primitivo start? The Primitive Way begins in Oviedo, the Asturian capital, to run through the west of the Principality of Asturias through towns such as Grado, Salas, Tineo or Pola de Allande.

The entrance to Galicia is through A Fonsagrada, in Lugo, after crossing the Acebo, the mountain area that separates Asturias from the Galician community. This step will be one of the hardest stages for the pilgrim who travels this Camino de Santiago.Lugo is one of the key points of this Route in Galicia, allowing the pilgrim to feel the heritage and history of this city of Roman origin.

How many stages does the Camino Primitivo have? With just over 300 kilometers, the Primitive Way is usually done in 13 or 14 stages, linking the last 3 with the French Way, specifically in Melide.

One of the hardest Jacobean Routes
The Primitive Way is one of the hardest Jacobean Routes, with stages that alternate ascents and descents, passing through mud roads and trails, typical of the mountains and inland. The beauty of the landscape and the existence of a correct and continuous network of hostels and accommodation means that every day more pilgrims choose it.

The Route also has good signage and runs along tracks that cross the green landscapes of this beautiful Asturian-Galician area. There is hardly any contact with roads with high traffic and the day-to-day passes mostly in the middle of nature and through rural and mountain areas.
For pilgrims by bicycle it is one of the most demanding routes and with the worst cyclability. The mountain bike becomes the pilgrim's best friend on this itinerary in which he will encounter a good number of difficulties, especially in the autumn and winter months.

Way of San Salvador
The Camino Primitivo has a variant that makes Oviedo a destination point. It is the Camino de San Salvador, which connects León with the Asturian capital through the Cantabrian mountain range. Its origin dates back to the Middle Ages, when many pilgrims, upon reaching León, decided to deviate on their way to Santiago visiting the relics of the Cathedral of San Salvador, in Oviedo. And, from there, continue through the Primitive Way to Santiago. From those days we have been left with a saying that many devotees sing to travel both routes: "Whoever goes to Santiago and does not go to Salvador, honors the servant and leaves the Lord" .