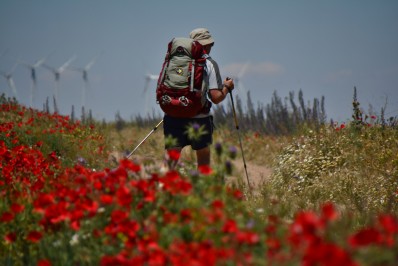 In Spain, the Camino Francés (The French Way) starts in Roncesvalles, you leave from Navarre, or in Somport if you depart from Aragón. This is the most well-known and tradition-steeped route to Santiago de Compostela to the point that it has become a cultural, artistic and sociological landmark attracting 7 out of 10 pilgrims coming to the Santiago de Compostela.

Equipped with a very complete network of services and with a large number of public hostels, correct signage and unique hospitality, the Camino Francés is the perfect itinerary for the pilgrim who wants to discover the Camino de Santiago.

Although it is one of the longest itineraries that go to Santiago, with about 800 km from the French town of Saint Jean Pied de Port to Santiago de Compostela, the pilgrim will discover an extraordinary human, artistic and cultural wealth. It is about a total of about 30 stages of the Camino that cross the north of Spain and that are worth traveling once in a lifetime

The Camino Francés received in 2004 the Prince of Asturias Award for Concord, it is a World Heritage Site and the Council of Europe made it the first European Cultural Itinerary. Acknowledgments all that realize the importance of this pilgrimage route worldwide.

Active since the 9th century, the date on which the discovery of the Apostle's tomb is dated, the Camino Francés has a route that was fixed, as we know it today, at the end of the 11th century.

The French Route aroused such interest in Medieval Europe, that already in 1135 the famous Codex Calixtinus became a pioneering travel guide, collecting all the sections, sanctuaries, data of the local inhabitants and detailed notes of this itinerary that departs from France.

The Camino Francés crosses the Gallic country through four routes: Paris-Tours, Vezelay-Limoges and Le Puy-Conques, which enter Spain through Navarre. The fourth, Arles-Toulouse, crosses the border at Somport and continues to Jaca, starting the Aragonese Way. Crossed the border, the pilgrim will have to face a month's journey on foot, with thirty stages, until reaching Santiago.

In Spain, the Camino Francés has two starting points: Roncesvalles if the pilgrim starts in Navarra, or in Somport if he starts his Way in Aragon. To give you an idea, here is a link where you can locate the French Way on the map.

Puente la Reina is the junction point between the two variants of the Camino Francés: those that arrive from Saint Jean Pied de Port and cross Roncesvalles and Pamplona; and those who walk from Somport through the provinces of Zaragoza and Huesca.

Through the Bercian region you can access Galicia, the mythical town of O Cebreiro. From there there is a week of travel through the lands of meigas, legends and green landscapes, until we reach the Praza do Obradoiro and pick up the Compostela.

From Sarria to Santiago

The Camino Francés from Sarria to Santiago is the most popular section among the current pilgrim. This is the last 100 kilometers of the Jacobean Route, the ones necessary to get to the Compostela.

The section from Sarria to Santiago is usually covered in five stages, with stops in Portomarín, Palas de Rei, Arzúa and O Pedrouzo. However, like all Caminos, they can be adapted to your needs. Many pilgrims decide to go from Sarria to Santiago in 6 stages, dividing the Palas de Rei-Arzúa stage in two. This allows the pilgrim to go more rested and spend the night in the Jacobean town of Melide.

Although it is perfect for people who have only a few days to do the Camino, it is advisable to extend the Route to enjoy the Camino and live the experience deeply.

The Camino Frances de Santiago by bike is also very popular. The minimum to get to Compostela, what many pilgrims mistakenly call the Compostelana, is 200 km, so the most used section of the Camino is León-Santiago.

The backpack transport service is available on the entire Camino Fancés from Easter to October 31. And on the Sarria-Santiago section, the Paq Mochila is available all year round.

How to get to the starting point?
Saint Jean Pied de Port
Orreaga/ Roncesvalles