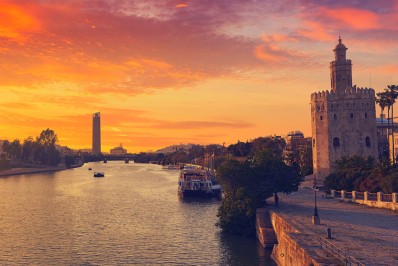 From Sevilla to Astorga. 38 sections. 963 km.
The Vía de la Plata offers two options to get to Santiago de Compostela:
- In Astorga, link the last 11 stages with the French Way.
- From Granja de Moreruela, the pilgrim can deviate along the Camino Sanabrés (13 stages)

The Vía de la Plata, also known as Southern Way, is the Jacobean itinerary that crosses the Iberian Peninsula from south to north.

Andalusia is the starting point of this Jacobean Route that, following the old Roman roads, crosses Extremadura and Castilla y León before reaching Galicia.

Astorga is the town where pilgrims on the Vía de la Plata traditionally meet those on the Camino Francés or French Way to access Galicia and continue to Santiago de Compostela.  Besides, you can also continue to Puebla de Sanabria and do the Sanabria Way.

The other great Jacobean Route in the southern peninsula reaches this Camino de Santiago: the Camino Mozarabe. With starting points in Almería, Córdoba, Jaén, Granada or Málaga, the Mozárabe joins the Vía de la Plata when arriving in Mérida.

Less popular and endowed with fewer services than other Jacobean paths such as the French Way or the Northern Way, the Vía de la Plata is a well-signposted route with an acceptable number of accommodations. The entire route is well signposted, with numerous yellow arrows that will help us not to lose the route in the infinite Andalusian and Extremaduran meadows.

In addition to the typical yellow arrows on the Camino de Santiago, the Vía de la Plata has complementary signs. It is about granite blocks with colored tiles. Of course, we must always follow the one that contains the yellow color.

Avoid the hot months
The greatest enemy of the Vía de la Plata is heat. Temperatures are usually high in the territories it crosses, leading in recent years some pilgrims to suffer from heat stroke and have hydration problems. For this reason, we recommend avoiding doing the Vía de la Plata in the hottest months of the year such as July, August and September.

March, April, May and October are the most recommended months to travel the Vía de la Plata. They will also be those that register a greater number of pilgrims, especially foreigners.

Rich historical and cultural heritage
This Route offers nature, calm landscapes and quaint villages. The Vía de la Plata also goes through Roman ruins, historic cities and lively towns such as for example the Andalusian capital, Seville, and UNESCO Heritage Sites such as Mérida, Cáceres or Salamanca. The Southern Way is a great chance for pilgrims to discover amazing spots such as the ruins of Augusta Emerita, or to enjoy some Iberico ham.

Historically, this Camino was used to trade in silver coming from the Americas by ship to the port of Seville, hence its name (literally, silver way). In fact, that is also the current name of the Roman road that goes through Mérida, Salamanca and Astorga, and even of the autovía (toll-free highway) that links Seville to León.

How to get to the starting point?
Sevilla
Guillena