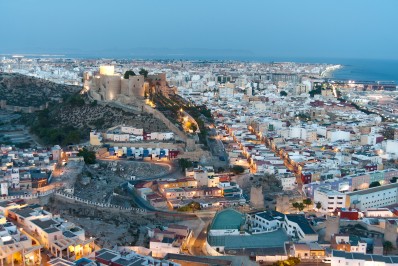 The Mozarabic Way is one of the historical routes to Santiago de Compostela used since the Middle Ages by pilgrims from different parts of Andalusia.
With the discovery of the Apostle's tomb, different cities in the Muslim territory of al-Andalus served as a starting point for those citizens who preserved their Christian faith. They were known as Mozarabs, who left cities such as Almería, Granada or Córdoba, until they joined the Vía de la Plata.

It is precisely in the capital of Extremadura, in Mérida, where the pilgrim joins the Via de la Plata to continue to Santiago. This pilgrimage thus becomes one of the longest to Compostela, up to 2 months, for those who decide to undertake it on foot.

The reward of this intense Jacobean Route is daily, with towns full of charm, a range of landscapes and a renowned artistic and cultural heritage. The spectacular monuments of the Andalusian cities, the nature of the Sierra Nevada or Sierra Morena, the olive groves and the valleys, fill the pictures of an unforgettable adventure.

Avoid the hot months
When planning the stages, pilgrims who do the Camino in summer must take into account the high temperatures in this area of southern Spain. Meanwhile, in the winter months, you have to count on snow in some sections that develop in height. Before leaving, it is also advisable to check the accommodation network, since in some villas the hotel offer is limited or they do not have a specific hostel for pilgrims.

The intense work of the Associations of Friends of the Camino de Santiago, from the different Andalusian provinces, has turned the Camino Mozárabe into an increasingly well-marked Route, with more information for pilgrims and with better lodging opportunities.

The Camino Mozárabe, together with the Vía de la Plata, is one of the most suitable routes to Santiago for those pilgrims who decide to travel the Camino by bicycle. Avoiding the hot months, this itinerary runs along comfortable dirt or asphalt tracks, while the route hardly presents any significant slopes.

How to get to the starting point?
Almería
Santa Fe de Mondújar