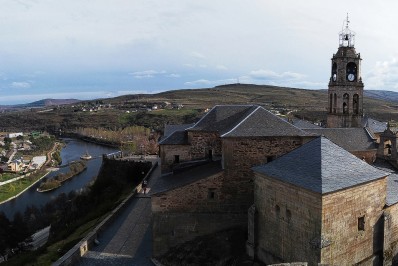 The Sanabria Way is a variant of the Jacobean Routes taken by pilgrims from the south of the Iberian Peninsula: the Vía de la Plata or Camino Mozárabe. It is in the province of Zamora where this Route begins, which runs through ancient Roman roads and is part of the itinerary used by the Galician reapers who traveled to go to work in Castile.

The Zamora town of Granja de Moreruela is the beginning of the Sanabria Way. Here, the Cistercian order founded, a few kilometers from a Roman road, the monastery of Santa María de Moreruela. It is the oldest Cistercian monastery in Spain and was originally known as Santiago de Moruela, evidence of the Jacobean past of this Route.

At this point, the pilgrim can reach Santiago by the original Vía de la Plata, continuing to Benavente and Astorga, connecting with the French Way. Or take the Zamorano section through Granja de Moreruela, Tábara, Santa Marta de Tera, Mombuey and Puebla de Sanabria, as a natural continuation of the Vía de la Plata.

Two variants to enter Galicia
The entrance to Galicia has two alternatives: the shortest and most popular is the one through A Gudiña and Laza. The other alternative of this Camino de Santiago enters the province of Ourense through Verín. It is a somewhat longer variant, but highly recommended for cyclists, since it runs largely on asphalt roads. This route connects with the internal variant of the Portuguese Way in the Portuguese town of Chaves.

The Camino Sanabrés visits the beautiful city of Ourense, circulates through the province of Pontevedra and enters A Coruña until it reaches the Galician capital. The Way allows you to discover some Romanesque jewels, vineyard landscapes and green paths where tranquility and nature preside over the days.

The pilgrims who make the Camino Sanabrés have a good network of hostels and accommodations, especially in the A Gudiña and Laza variant. It is a well signposted route to Santiago de Compostela. Wines, gastronomy and artistic and cultural heritage will accompany the march of those lucky enough to make this pilgrimage.

How to get to the starting point?
Granja de Moreruela
Tábara