The yellow arrow, the sign of the St. James's Way 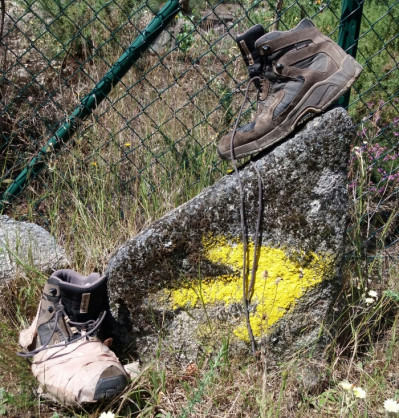 The yellow arrow is more universal than ever. As from 2021 it will be the only official sign which signposts the different pilgrimage routes. This follows a decision by the Jacobean Council (Consejo Jacobeo), which met earlier this month in León in order to prepare the 2021 Holy Year.

The yellow arrow is a comparatively recent symbol. Until the 70s, the Camino de Santiago (St. James's Way) did not have any sign which pointed the way along the Route. Since the Middle Ages the pilgrims who arrived at Santiago after having travelled hundreds of kilometres did so following by the footsteps of other walkers.  It would be in the 70's when the parish priest of O Cebreiro, a village of a deep-rooted pilgrimage tradition, created this symbol "by chance" Elías Valiña was a tireless scholar of the Camino de Santiago (St. James's Way). And who dedicated his life to restoring the pilgrimage routes to the splendour of bygone eras. To that end he decided to map what is now known today as the Camino Francés (French Way) from Roncesvalles to Santiago de Compostela, reviving certain lost stretches of the Route and initiating its signposting so that the pilgrim would find it easier to follow a set route.

Paint for signposting the route

Legend has it that the priest started painting yellow arrows seizing the opportunity using leftover paint used for signposting roads which had been given to him by some workers who worked in the area.  For José Manuel López Valiña, a descendant of the parish priest of  and resident of this village, the choice of this colour was by no means entirely by chance.  “In the first outings to explore the terrain and signpost the Route, my uncle realised that it was necessary to use something for attracting a lot of attention and which would last for a lifetime. When he arrived in France he saw that yellow was the colour used to signpost mountain routes, so he decided to paint the Camino de Santiago (St. James's Way) route in that colour ”, he states. Be that as it may, the fact is that Elías Valiña chose to signpost the pilgrimage route with simple and humble yellow arrows. And it was a truly great idea, given that it is a simple and easily recognisable distinctive sign which has become universal.

The popularisation of the yellow arrow as a symbol of the Camino de Santiago (St. James's Way) led the Council of Europe to declare this sign as the common symbol with which to signpost the major routes. This first "officialisation" of the yellow arrow is included in the Santiago de Compostela Declaration signed on 23 October 1987 which is why the Camino de Santiago (St. James's Way) became the first European Cultural Route.

On the verge of celebrating a new Holy Year, the Jacobean Council (Consejo Jacobeo)- a body of cooperation between the General State Government and the Autonomous Communities through which the different Camino de Santiago (St. James's Way) Routes pass through - has just given it a fresh impetus. Meeting in the Palacio del Conde Luna in León, the members of the Jacobean Council (Consejo Jacobeo) have decided to convert the yellow arrow and shell into the only official symbols of the Camino (Way): the scallop shell to signpost that the pilgrim is on the Camino, on any pilgrimage route; the yellow arrow to signpost the direction to Santiago. This measure will enable pilgrims to identify the official signs, which will be the same in all itineraries and in any autonomous community, therefore improving the attention to pilgrims.

The hodgepodge of signals therefore comes to an end. Stones, monoliths, tapes, even GR signs with their white and red markings are some of the signs that can be found today depending on the stretch of the Camino (Way) chosen. Now, the Jacobean Council (Consejo Jacobeo) establishes that the yellow arrow must be present in all Routes and in all territories. Furthermore, the signage must be mandatory at each crossroads and is recommended at every two kilometres.

Similarly with this decision another controversy ends:  that of the use of the yellow arrow for anything and everything.  Therefore, hostels, hotel and catering establishments, shops, restaurants will not be able to indicate the location of their businesses with the yellow arrow, given that the arrow must be solely and exclusively used to indicate the direction of the Camino (Way).