The Holy Door is closed until 2021 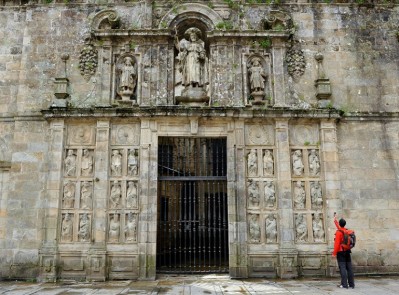 Entering the Cathedral of Santiago for the first time after travelling a long way is always something special for pilgrims. But there is something that can make it an even more special experience: being able to cross through the Holy Door, a door that only opens under exceptional circumstances and that closed last weekend, until 2021. If you want to learn more, keep reading.

What is a Holy Door?

If you're not familiar with the subject, the first question to pop into your head is when the Holy Door is open, seeing as it's not usually talked about unless it's open to public access. This occurs at least every five years.

A Holy Door is basically the door to a Catholic church that grants to those who pass through it plenary indulgence, i.e., the absolution of all of their sins. Logically, receiving this indulgence is not just a matter of physically passing through a door; it is also necessary to confess, receive Holy Communion, recite the Creed and pray for the Pope and for your intentions. Once this is done, the person is forgiven for all of his or her sins, and will be able to enter Heaven without having to go to Purgatory first.

Now, you know that this door opens at least every five years. But why? The Holy Door of Santiago theoretically only opens during the Compostelan Holy Years, which are those years in which the feast of the Apostle Santiago (25 July) falls on a Sunday, which occurs every five, six or eleven years, except in exceptional cases (when the last year of a century is not a leap year, which can occur every seven to twelve years).

The first Compostelan Holy Year, also known as the Compostelan Jubilee Holy Year or Jacobean Holy Year, was inaugurated by Pope Calixto II in 1122 (a year in which, coincidentally, the last stone of the Cathedral of Santiago was placed). 1126 was the first year in which it was celebrated, making Santiago de Compostela the second jubilee city in the world, just behind Rome. Later, in 1178, Pope Alexander III declared that the privilege granted by Pope Calixto II would become perpetual, which gave rise to the European-wide pilgrims through the Camino de Santiago.

It is worth mentioning that at that time the Holy Door that we know today did not exist, since it was built sometime in the first half of the sixteenth century. Located in the plaza of A Quintana, this symbol par excellence of the Holy Years immediately spoke to the pilgrim crossing it to the main altar, where one can find the tomb of the Apostle Santiago and, on this crypt, the medieval figure that is typically embraced.

The fact that the Door was built almost 400 years after the Church granted Santiago the privilege of having a Holy Year, indicates that it is not necessary to cross the Door  to achieve plenary indulgence, although doing so has become a rite that symbolises the physical, emotional and spiritual culmination of the Camino that the pilgrims have travelled.

The opening of the Holy Door

Opening a Holy Door is not an everyday occurrence. To do so, the Archbishop of Compostela performs an ancient ritual that is witnessed by hundreds of faithful, pilgrims and church members. The ritual consists of striking a wall of slabs covering the Door, placed there the day before, three times with a silver hammer. Once the wall falls, the Archbishop cleans the perimeters of the Door with holy water and olive branches. It is he who first crosses through the Holy Door. This ritual takes place every 31 December of the year preceding the Holy Year and is performed every 31 December of the Holy Year itself to close the Door.

2016, the first exception to the Holy Year

As we've mentioned before, the Holy Door of the Cathedral of Santiago is only open during Holy Years, so considering that 25 July falls on a Sunday, the last Holy Year was in 2010 and the next one won't be until 2021: why is the Door being opened this year? Pope Francis saw the need to establish a Jubilee of Mercy, which means that not only is the Holy Door of Santiago being opened, but all the other Holy Doors around the world are as well, giving way to an unprecedented situation in the whole of history.

The closure of the Holy Door

Contrary to what happens during the Holy Years, the Holy Door didn't close in 31 December, but rather 13 November. To do this, it is again the Archbishop of Compostela who is in charge of closing it: with a ritual similar to that of opening it, using incense and blessing the new stones, then placing one of them on the liminal space, thus ending the Jubilee.

We hope that this article has helped you to understand the Holy Door and all of its intricacies better. If you enjoyed this article, please share it.