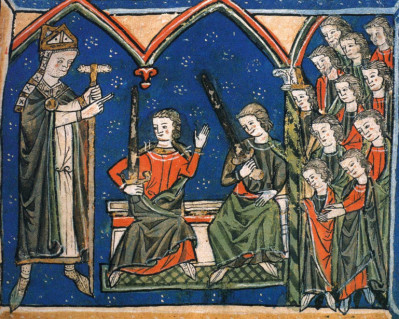 Today we are time travelling pilgrims and have made a rather long journey, landing in the ninth century. The history of the Way of Saint James (Camino de Santiago) begins in these remote times, a period in which essential characters lived, without whom the Camino would surely not exist. Or, at least, not as we know it. Would you like to meet them? 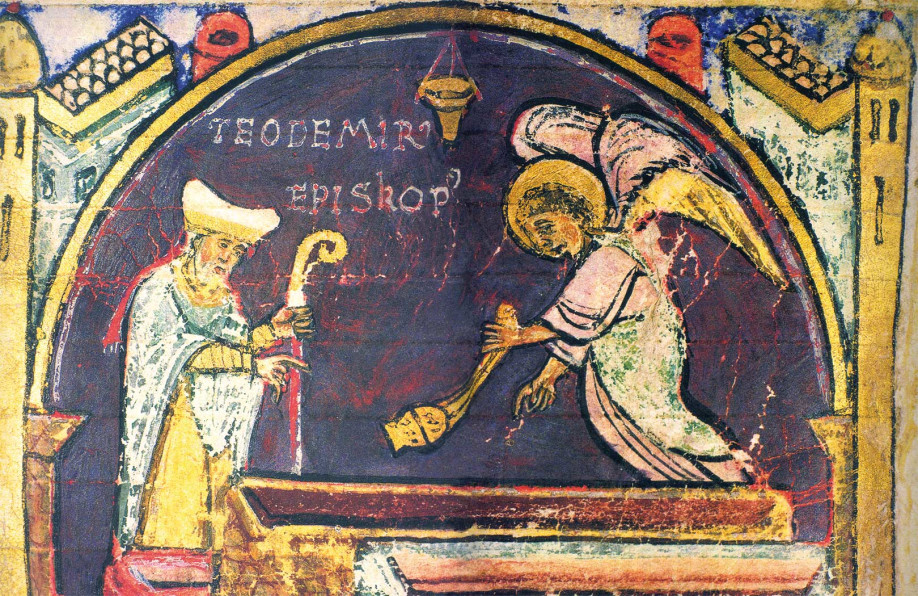 It is some time around year 830 in the bishopric of Iria Flavia (located in the current municipality of Padrón, a few miles from Santiago). Here we meet a hermit called Paio, the sole inhabitant of the place of known as Solovio, who reported strange phenomena in the nearby forest of Libredón to Bishop Teodomiro. The bishop decreed three days of fasting, after which he returned to the site accompanied by many faithful who were witnesses to the miracle: there, in a marble mausoleum consumed by vegetation, were the remains of St. James the Apostle (Santiago). The news of the discovery ran like wildfire and soon reached the ears of Alfonso II, king of Asturias.

Teodomiro's tomb was found in 1955 during Cathedral excavations, finally confirming his existence. Based on record, we know that he died in 847. The fact that he decided to be buried here, and not in Iria Flavia as befitting his position, is the first indicator of the popularity and power that soon reached Compostela thanks to the Camino de Santiago. Obviously, Teodomiro saw potential in the discovery and how it would stir and move the people at the time. The first step of the Camino was now in place. 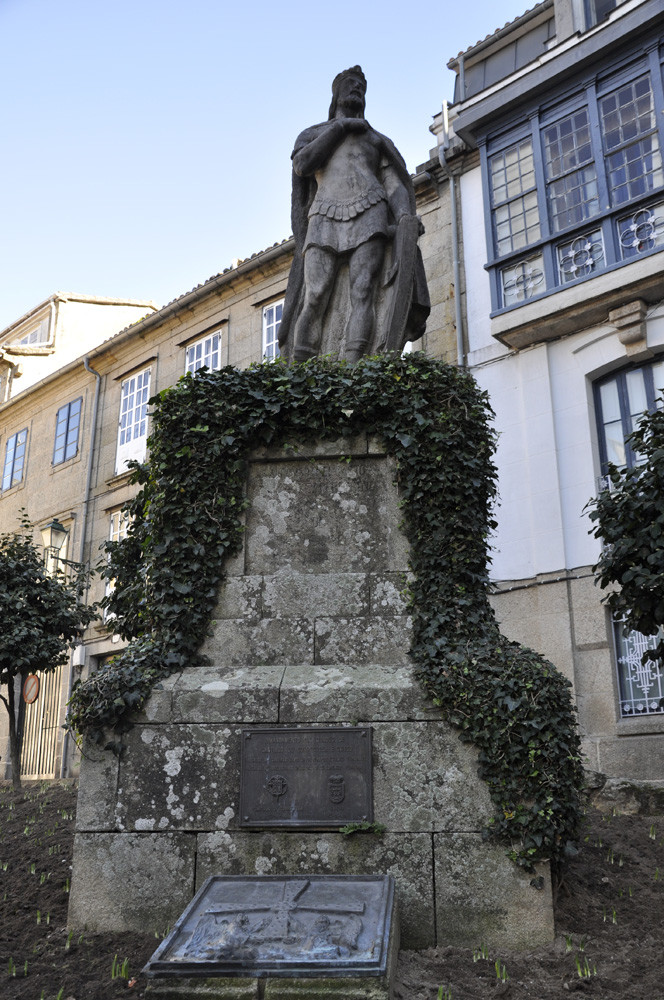 At that time Galicia was part of the kingdom of Asturias and King Alfonso II could no longer ignore the stories that were travelling to his court. Thus, he began the journey to Compostela from Oviedo, capital of his kingdom, to verify the discovery. He unknowingly became the first pilgrim, and that route is now today known as The Primitive Way (Camino Primitivo). Together with Teodomiro, he designed a modest temple for the cult of the Apostle, which would eventually become the Cathedral.

The period of Alfonso II's reign was violent, with continuous confrontations with Muslim armies spread throughout the peninsula. Understanding the importance of the symbols, Alfonso was smart to give support to Teodomiro's plans for the remains of Santiago (St. James the Apostle). This was a boost to the morale of the Christian troops -and of course, for the power and influence of the king himself and of the Church. The alleged intervention of the Apostle in the battle of Clavijo (844), in his famous warrior version known as 'Matamoros' (Moor-slayer), helped to identify the Apostle as a perpetual champion of the Christian kingdoms in their fight against Islam.

Now, let's fast forward to the eleventh century. At this time the Way of Saint James began its boom period and the pilgrims coming to Compostela were overflooding the Basilica of the time, built by Pedro de Mezonzo. Hence, Diego Peláez, the new bishop of Iria Flavia, undertook major reforms to create a larger temple in the Romanesque style. To do this he mobilised all of the resources at his disposal and even invented some new ones, including using pilgrims to help transport stone, making use of those headed towards the city. He also gathered the very best craftsmen in Europe, who brought new ideas and techniques, and not just those relating to architecture.

Peláez also made other improvements: in defence, in territorial organisation, in the infrastructure of the Camino and, of course, in its promotion. Sadly, his story does not have a happy ending: after successive political tensions and being suspected of betraying King Alfonso VI, he had to leave his post and ended his days in exile in Aragon. 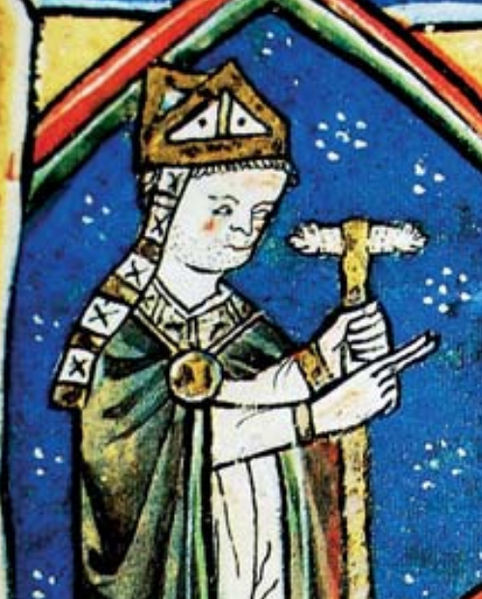 In 1095 the seat of the bishopric was officially moved to Santiago de Compostela, which had already functioned as such for sometime. A few years later, in 1100, Diego Xelmírez is named bishop. This is a crucial point in the story because the vision and negotiating skills of this particular character marked a before and after for the Camino. Xelmírez was the Cathedral's great promoter: in 1122, according to the Codex Calixtinus, the last stone of the temple was laid. He was also dedicated to the urban modernisation of medieval Compostela and to the construction of pilgrim hospitals. And he certainly took the opportunity to tell what had done: the 'Compostelan History' includes, at his request, a detailed chronicle of his career.

Xelmírez's story is a long one and is full of scenes worth a good movie: negotiations to convert Compostela into an archbishopric, which was successful in 1124 after 'moving Rome with Santiago' (this would be de spanish version of the english proverb 'movin heaven and eart'); or that time that, as it were, when he borrowed some relics in Portugal, an act later christened as ‘Pío Latrocinio’; he also crowned king Alfonso VII with his very own and narrowly escaped (reputedly via rooftops and incognito) from a popular revolt in 1117, in which the Cathedral was burned with Queen Urraca barely surviving. A colourful life, don't you think?

... or, to be clear, Santo Domingo de la Calzada, gives his name to one of the most recognised sites of the Camino Francés. As we mentioned in our previous post, Domingo García was a religious man who dedicated his life to improving the conditions of the first pilgrims.

He encouraged the construction of bridges, shelters and hospitals, and improved the layout of the Camino itself, taking advantage of an old Roman road. The population existed because of and as a result of the work he created. Incidentally, San Juan de Ortega, a name that also leads us to the Camino Francés, was his disciple.

These are just a few of the names highlighting the history of the origins and growth of the Camino de Santiago. Did you already know some of these names? Did we miss someone important? Feel free to leave a comment with your contribution.