Who was Saint James? 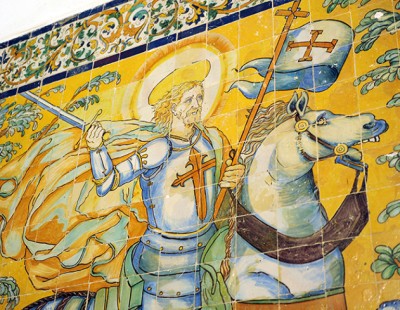 Saint James according to the Bible

James, who appears in the Bible as Jacobus, was the son of Zebedee, a Jewish preacher of the 1st century, and Salome, a woman identified as the sister of Mary, making the apostol a direct cousin of Jesus. According to the Gospel, he was, along with his brother John, one of the first apostles chosen by Jesus when they were fishing on the coasts of Galilee. Starting there, he became one of the closest apostles to Jesus along his life, being present in many of the miracles that his teacher made along his life.

After Pentecost (about 33 AD) Santiago is sent to preach to Hispania, present territories of Spain and Portugal, where arrives from Jerusalem in an uncontested way: some indicate that he crosses the Columns of Hercules Gibraltar), bordering the Portuguese coasts and finally arriving to Gallaecia (Galicia); others establish the origin of his journey in Terraco (present Tarragona) and his later crossing along the Ebro valley and the Cantabrian Mountain range to finish arriving at what is now La Coruña, while finally the third version says that Its arrival is actually to Carthago Nova (Cartagena), heading north from there.

Whatever the journey was, tradition indicates that the apostle was making some disciples throughout his journey and preached the gospel with little acceptance. Being in Caesaraugusta (Zaragoza), and being decayed by the little success of his mission, the apostle decides to pray, along with his disciples, at the banks of the Ebro. This is when, according to the testaments, the Virgin Mary " appears "in mortal flesh" (Before his assumption) to ask him to build a church in her name, leaving a jasper pillar as proof of her visit. This will not only be the first church dedicated in honor of the Virgin, but it was its first appearance, which reinforces still more the importance of Saint James within the Christianity.

After this apparition, James and his disciples, who have also witnessed the apparition, built a first adobe church in the place that today occupies the Basilica del Pilar.

Death and return to Galicia

After her visit, Santiago decides to return to Jerusalem to see Maria before dying. There he is captured, tortured and executed during the religious persecution initiated by King Herod Agrippa. In this way, James the Apostle is the first of the apostles to be martyred. This is de only martyrdom recorded in the Acts of the Apostles.

Once executed the king forbbid to bury him, but his disciples take advantage of the darkness of the night to transfer the body of the apostle in a boat to Galicia; they deposited the body in a rock that yielded until becoming what today is known like the Sarcófago Santo.

The disciples went to the lands dominated by Lupa, a pagan queen, to ask for a place to bury Santiago. The queen accused them of sinning of pride and sent them to the court of Dayos, a neighboring king of Lupa and an enemy of the Christians, who ended up enclosing the disciples of the apostle.

According to the Christian tradition a series of miracles allowed the disciples to escape: first the appearance of an angel who freed them, then the death of the soldiers who persecuted them and by the last the taming of wild bulls that Lupa had given them to Carry the body of the apostle instead of oxen. It was after seeing all this that the pagan queen is converted to Christianity, orders to destroy all places of Celtic worship and decides to bury the apostle in what was his personal palace. It is in that place where today stands the Cathedral of Santiago.

From there the history is better known: the prohibition and persecution of Christianity makes forget the place until it is discovered in the 9th century by the hermit Pelayo and the Bishop Teodomiro, giving rise to the beginning of the Camino de Santiago. But there is still another side of Saint James to see.

Saint James as patron of Spain 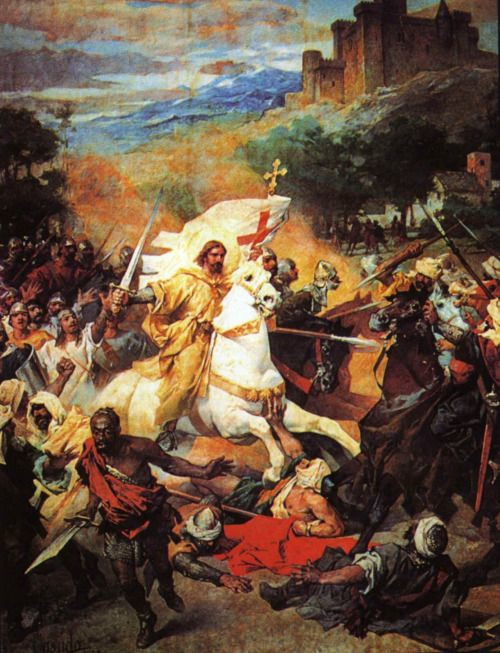 Aware of the discovery of the tomb of the Apostle, King Astur Alfonso II embarks in a  journey to the place, understanding that this finding would be a decisive factor for the agglutination of the Christian territories of the peninsula against the invasion of Islam. From there, the image of the apostle will gain more and more strength in the struggle against this invasion as Santiago Matamoros, the warrior apostle. He was awarded several appearances riding a white horse and brandishing his sword, as that one in which appeared to help the army of King Ramiro I to defeat the troops of Abderramán II in the Battle of Clavijo.

These miracles were infusing of value in the soldiers that finally reconquered Spain in 1492, thing that made consider James as the patron of Spain since IX century, situation reconfirmed in 1630 by Pope Urban VIII, who declared him patron of Spain of official form .

Thus we see how behind the Camino is a very rich history related to Saint James, a story that is not often known. We hope you find this article interesting. If you liked it, don't hesitate to share it.