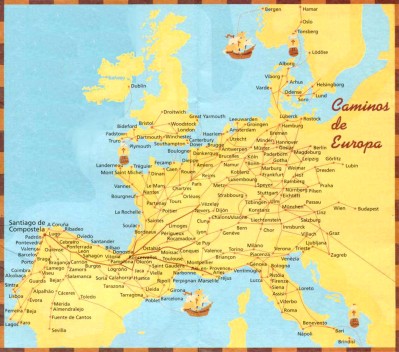 The ITB, considered the most important tourism fair in the world, today opens its doors in Berlin. Until next Sunday, 11 March, Correos will participate in this benchmark event promoting the Camino de Santiago and the services offered by the postal company to pilgrims.

In addition to the activities aimed at tourism professionals and institutions from more than 180 different countries, the ITB fair in Berlin is expected to receive more than 160,000 people, resulting in a turnover of 7 billion Euros.

Taking advantage of our stay there, today on our blog we're analysing the importance of the Jacobean Route in Germany and talking with Beate Steger, a pilgrim who holds the Santiago de Compostela in a special place in her heart. 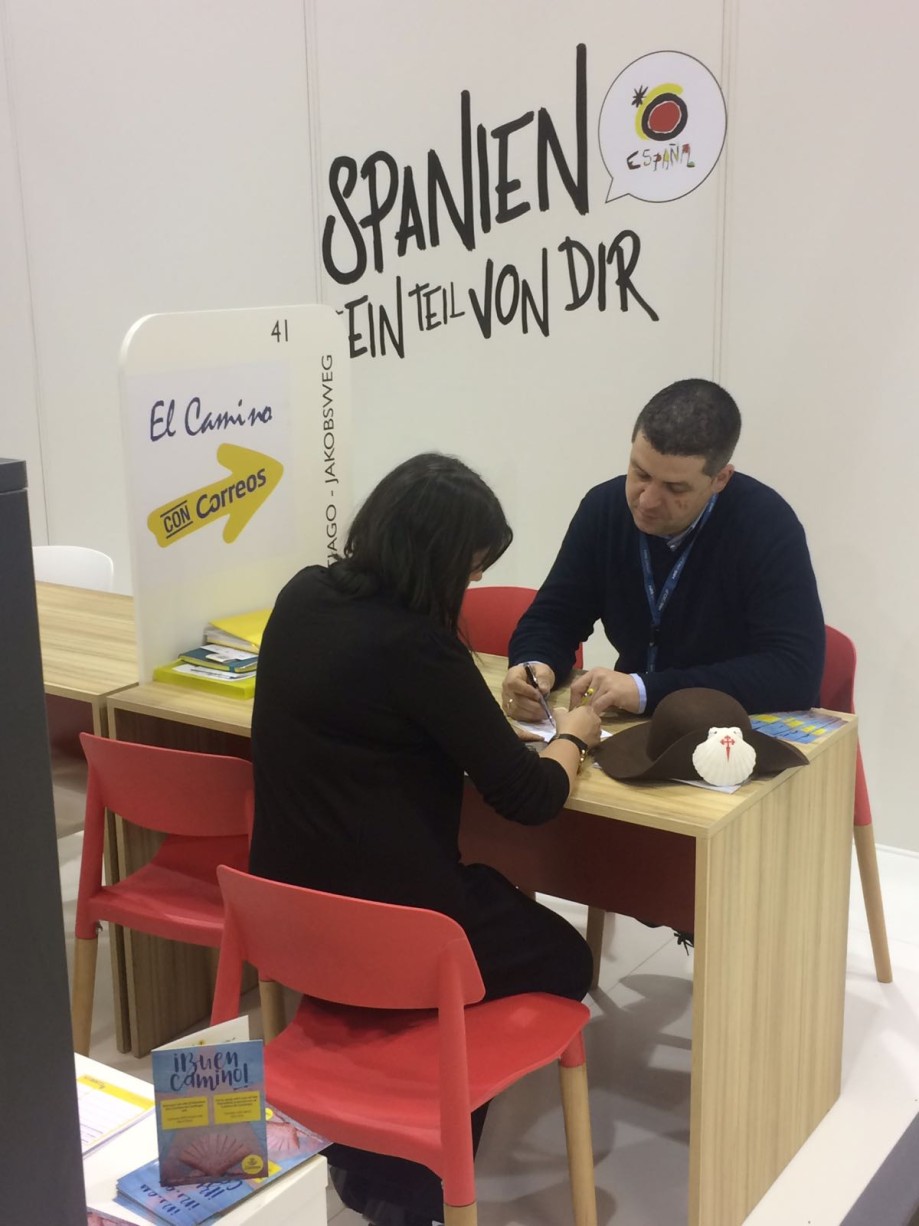 Germany is a key country for the Camino de Santiago. After Italy, it is second place in the country with the most foreign pilgrims travelling the different Jacobean Routes. In 2017, 14% of foreign pilgrims who collected their accreditation in Santiago de Compostela came from Germany, reaching the figure of 23,227 people.

And it is that the tradition of the pilgrimage to Santiago from Germany is as old as the Camino itself. Already in the ninth century we find documentation of the cult of the Apostle, the beginning for pilgrimages and the presence of accommodation for pilgrims. Among the most famous is the Kompostellhof in Feankfurt, initially headquarters of the Germany cavalry order, which appears in numerous publications and documents such as Goethe's Poetry and Truth. 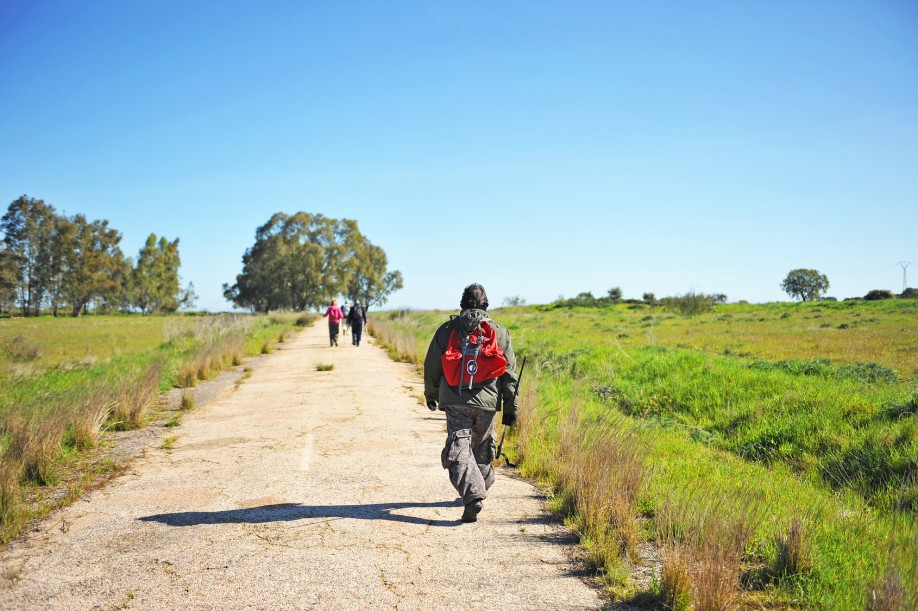 Today, more than 50 Jacobean Routes depart from Germany towards the tomb of the Apostle in Santiago de Compostela. Some appear in the stories of famous pilgrims such as the one of the wet Herman Künig von Vach (1499) or those of knight Arnold von Harff of Cologne (1499). The Jacobean imprint is also present through the different Associations of Friends of the Camino, the most important being Deutsche St. Jakobus Gesellschaft, founded in 1987 in the presence of numerous European leaders, among them the Superior Commissioner of Monument Conservation of the Council of Europe, José María Ballester, and the mayor of Santiago de Compostela. 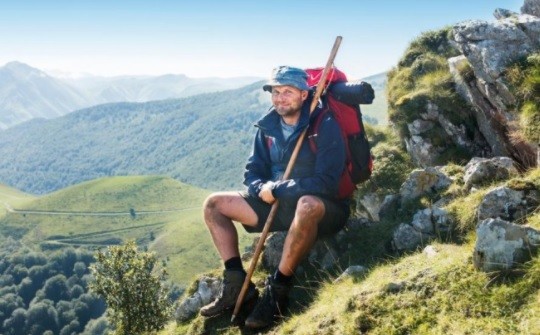 It is Well, I'm out of here (Ich bin dann mal weg), an experiential book written by one of Germany's most famous comedians: Hape Kerkeling. More than five million Germans have read this book in which Kerkeling proposes "a journey outside the traditional full of happiness." And his adventure convinced thousands of Germans to follow his example. In addition, the story of what happened to him in the 800 kilometres that separate Saint Jean Pied from Port de Compostela was taken in 2016 to the big screen by film director Julia von Heinz, immediately becoming a blockbuster.

None of this what led Beate Steger to launch on the Camino. Author of the website www.pilgerwissen.de, which not only tells her experience as a pilgrim, but gives important advice on how to travel the Route, Beate already has several roads behind her. We met Beate travelling the Camino to Fisterra in 2017, as she was encourage to try the Paq Mochila de Correos to enjoy your experience to the fullest. "It is a fantastic service, which helps many pilgrims travelling a route that would be impossible without it," he says.

Beate does not remember very well where she first heard about the Camino or what led her to visit it. But in 2001, she went with a friend, participating in a bicycle tour around the world, pedalling through eight countries from 1 April 2001 to March 2002. "Our plan was to pedal through the most beautiful, interesting and safe places. And one day we appeared in Pamplona with our bicycles and began the Camino," she says. 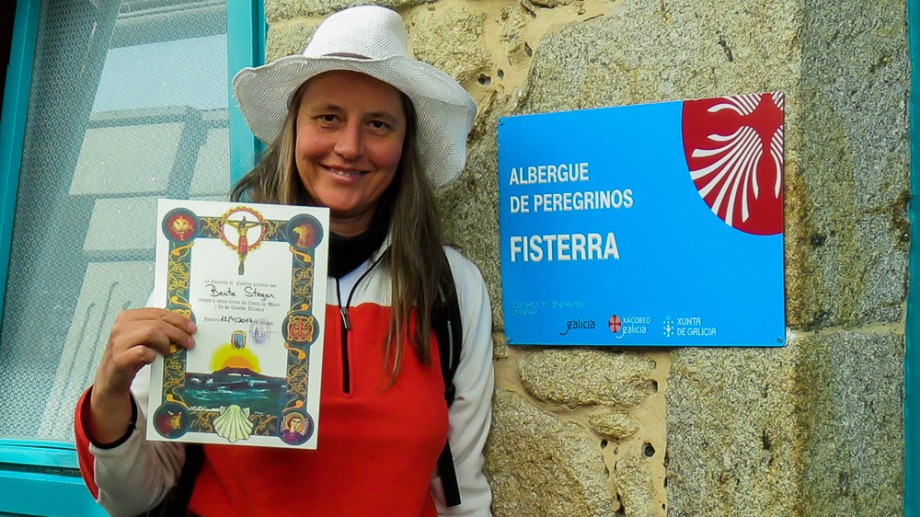 That first experience on the Route was unforgettable for Beate, who returned to her country with a firm decision: to return to the Camino but on foot. "While we were pedalling, I felt envious of all the pilgrims on foot. I wanted to do that because I had the feeling that I was going too fast. I missed the atmosphere and the real sense of the Camino," she tells us.

Despite her strong desire, Beate would take a long time to decide to return. It will be in 2017 for her 40th birthday: "I walked from Saint Jean Pied de Port to Santiago and I arrived exactly on my birthday to Finisterre," she says. The experience was more enriching than the first time. The very act if walking, the wonderful network of shelters and welcome, the relationship with other pilgrims...Only the weather when crossing the Pyrenees made her falter. That and a kidney stone that forced her to go directly to the University Hospital Centre of Santiago instead of attending the traditional Pilgrim Mass.

But that bad final stretch did not stop Beate from becoming a true lover of the Camino. And in 2017 she returned to Galicia to travel the Camino Portugués, and in 2017 the Fisterra one, returning to celebrate her anniversary at the End of the World. This year she will repeat her experience, this time with the Camino Inglés. And she'll use the Paq Mochila de Correos to continue her adventure.