8 examples of the presence of the Templars on the Camino 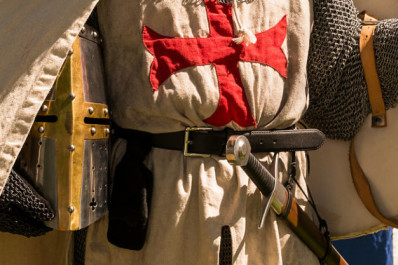 As we've already mentioned in one of our articles, the Camino de Santiago has its origins in the first journey made by King Alfonso II in the year 813, and was developed so much so that by the twelfth and thirteenth centuries, there were already thousands of pilgrims travelling the Camino every year.

For this reason, kings and clergy members began to build shelters, roads, bridges and hospitals to facilitate the pilgrimage of those who were on their way to Santiago de Compostela. But this was not enough, since it was also necessary to offer some security to pilgrims, and that is where an order, famous in some respects, but also shrouded in mystery appears: the order of the Knights Templar.

The Templars, officially the "Order of the Poor Knights of Christ and of the Temple of Solomon", was a Christian military order during the Middle Ages that was founded at the beginning of the twelfth century by nine French knights, whose mission was to patrol the road to Jerusalem and protect the safety of those pilgrims who were headed there after their conquest.

The power of this order grew rapidly thanks to several factors, although the principal reason is the fact that they managed the Arabic numeration while the rest of Europe was still using Roman numeration, which allowed them to develop their knowledge of arithmetic, geometry and trigonometry, and would be applied to create a system that would be a predecessor to the banking system we have today.

This would end up being used to trick them and make them the enemies of those who would end up destroying them; but that is another story for another time. Let's now focus on what the Knights Templar left on the Camino.

When the Camino de Santiago began to gain importance, and attract more and more pilgrims, the Templars not only realized that these people would need protection, but that this protection could be beneficial to the organisation. Therefore, the presence of the Order was stronger day by day on the Camino, so much so that even today there are places and constructions that account for this. Let's learn more about them! 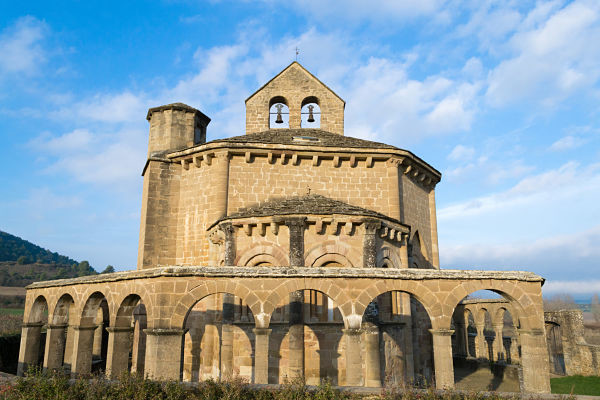 Although there is no documentation to conclusively prove the Templar origins of this church, there are certain features that lead us to believe that the Knights Templar had something to do with its construction: from its octagonal floor (typical of Templar construction) to its supposed similarity to the Dome of the Rock in Jerusalem situated at the location of King Solomon's temple where the Templars had their first seat, there are many connections to the Templar order

Church of the Holy Sepulchre

Located in Torres del Río, and constructed under a clearly Romanesque aesthetic, this church served as a lighthouse in its day for pilgrims on the Camino. Its Templar origin is much more recognised than that of the Hermitage of Eunate, since there are several documents linking this church with the Order, along with other discoveries, including bodies buried around the church wearing typical Templar dress. 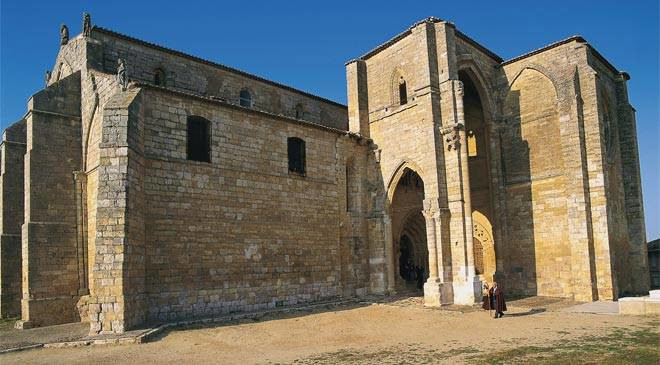 In Villalcazar de Sirga, the Knights Templar founded an important commandry in the thirteenth century (a commandry was real estate located in a certain place that the Templars formed from donations and subsequent purchase of other property or nearby land), the result of which is the magnificent temple of Santa María de la Blanca.

Church of the Crucifix

In Puente la Reina at the beginning of the Camino Francés we can find this church that dates back to the end of the twelfth century and was founded by the order of the Knights Templar under the name of Santa María de los Huertos. Inside, there is a mysterious crucifix of large dimensions and in the shape of a Y, which is considered one of the best works of Gothic imagery preserved in Spain. 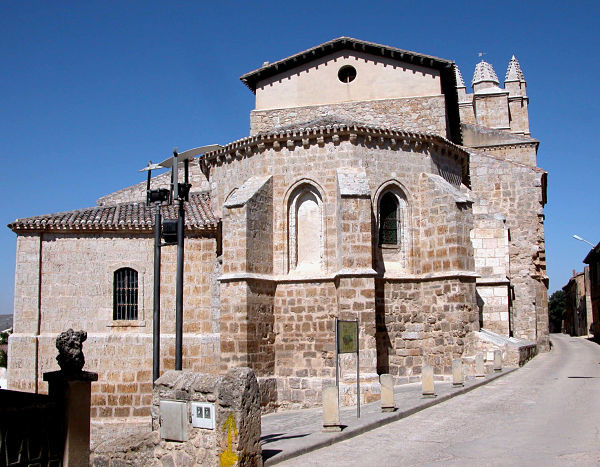 With Romanesque remains at its base and located on the street-Camino of Castrojeriz, this immense 3 nave columnar temple belonged to the Templars before passing to the Hermanos Hospitalarios of San Antonio once the Temple Order was expelled. On the capitals of the columns, you can see some jumper struts of clear Templar origin. 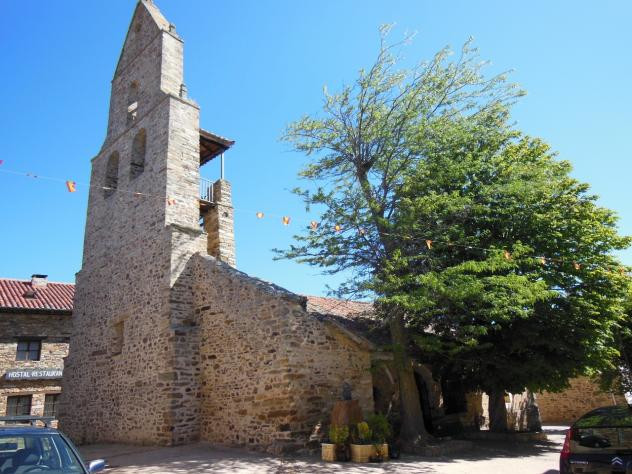 In this case, we're not only talking about the church, but also the town of Rabanal del Camino having purely Templar origins: the result of an advancement of the Order from Ponderrada, which sought to protect the pilgrims who crossed the Mountains of Leon, until Bierzo. In this sense, the Parish Church not only stands out because of its Templar origins, but also because it is one of the few examples remaining of Leonese Romanesque.

In 1178 Ponferrada became a subject of the Order of the Temple thanks to a donation from the Leonese kings. When the Templars arrived there, they found a small fortress, which had previously served as a Roman fort. From there began a series of expansions that would serve to turn the complex into a defence of the Camino, which would finish only in 1282 (what we see today has many more renovations made throughout the centuries). 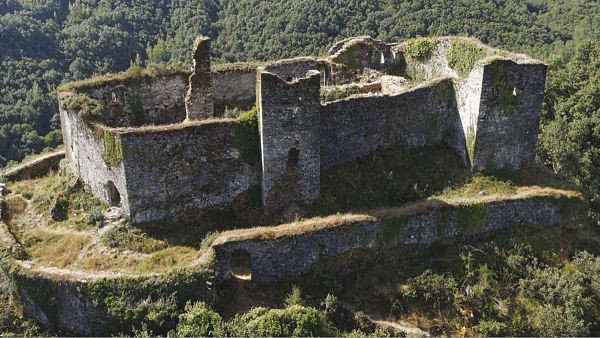 This castle was an important Templar enclave in its day, since it occupies an ideal position for the defence of pilgrims going to Santiago. The place where it is located, Vega de Valcarce, was a point of conflict since there was a toll collected (payment for the right of passage) of which pilgrims were exempt, with many trying to avoid it using alternative routes to the area. Thus, a route parallel to the original was created that just so happened to run by the Castle of Sarracín so that pilgrims could be defended by the Templars with the intention of collecting from any toll gatherer in the area.

We hope that you've enjoyed this article dedicated to the Knights Templar on the Camino de Santiago. Don't hesitate to share it!

Comments
Hunter
Did the Templars have any influence in the south of Spain? Anything to see around the city of Seville?
Lionel boxer
Any Templar sites between porto Portugal and Santiago de compostela?
El camino con correos
Hi Lionel, there are no Templar sites between Porto Portugal and Santiago. ¡Buen Camino!
Gregory Stegman
After my first Camino through Spain in 2014, I became fascinated by the stories of Templar Knights and the Holy Grail. I’m actually revisiting the Camino Frances next month for a modest 21 day trek. Each novel I’ve read about the Holy Grail , Templar Knights are included. Did the TL really locate the Grail which gave them their power and immense following throughout Spain and Portugal. Tomar in Portugal had an outstanding Templar reminder.
Sam Chelladurai
Thanks it helped to improve my understnading on the Knights Templars. It has great significant in the History of Christiananity and Islam. One side the Knights Templars were good in their deeds the other side they were brutaly fighting and killing their enemies. Everything supposed to be done in the name of God, but the same God did no want people to be killed. Quite a tricky argument.
El camino con correos
Thank you for reading us and for your comment. ¡Buen Camino!
T&N Hearn
Wonderful article. Pictures won’t open though. Any suggested readings to go deeper in the Templar history.?
SEE MORE COMMENTS