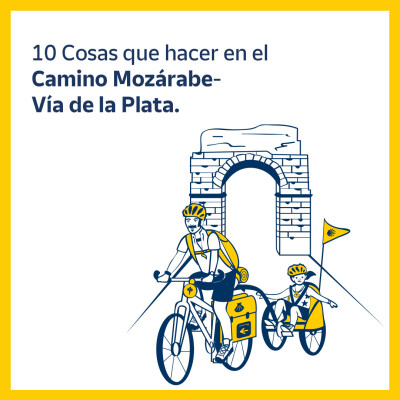 The Camino Mozarabe - Via de la Plata is one of the longest Jacobean routes, with nearly 1,000 kilometres between Seville and Santiago de Compostela.

On foot it is usually divided into 49 stages on its original route, which connects Seville with Astorga, where it joins the French Way. The stages are reduced to 36 if the pilgrim continues through the lands of Sanabria and Ourense.

is also one of the most popular routes for cyclists, as it is a cycling route and is usually done in about 15 stages. The most common routes are dirt or gravel tracks, as well as many kilometres of footpaths. There are few obligatory asphalt ones, and when there are stretches that are not suitable for cycling, there are asphalt alternatives that do not deviate much from the original route.

This Route crosses the Peninsula from south to north, offering pilgrims a rich historical and cultural heritage. Today we want to focus on some of these attractions pointing out 10 points that you cannot miss in our map of the Camino Mozarabe - Via de la Plata, which you can download here. Will you join us?

Before leaving, discover Seville. Visit the Cathedral and the Giralda, contemplate the Guadalquivir River and get lost in the neighbourhoods of Triana and Santa Cruz. You can go to Correos (Av. Constitución, 32) to pick up your bike or send a suitcase to Santiago.

Before leaving Andalusia you should not miss the ancient city of Italica, located in the Sevillian town of Santiponce. Italica was the first city founded by the Roman Empire outside of Italy, around 206 BC, and it was the birthplace of emperors such as Trajan and Hadrian.

The meadows and olive groves will accompany you to Extremadura, where you can enjoy medieval gems such as Zafra, declared a historic-artistic site, and gastronomic delights such as ham and olive oil.

Enter Merida via its impressive Roman bridge and visit its rich heritage, including its Roman theatre, the circus, Trajan's arch and the famous amphitheatre.

The Roman milestones will guide you to Cáceres, a World Heritage Site. Discover its churches and palaces, as well as the wall that divides it in two. Make a stop on your route when you reach Caparra, another of the great Roman cities on this itinerary.

Located just a few kilometres from Plasencia, this site is well worth a visit, where the Cáparra arch is located, a symbol of the city and of this Pilgrim's Route. It is an arch dating from the 1st century AD which supports its four semicircular arches on four pillars, giving rise to a quadri-frontal structure that is unique in the Iberian Peninsula.

Cross the Tormes River to enter Salamanca. Visit the Plaza Mayor square, discover the historic University building and visit its two Cathedrals. Take a photo in front of the Casa de las Conchas, with more than 300 stone scallops on its façade.

Take a break in El Cubo del Vino and its peculiar cellars dug into the ground before arriving in Zamora, a Romanesque jewel on the Silver Route. Visit its cathedral and castle and stroll along the banks of the Duero and the city walls.

The Castilian countryside will accompany you to Granja de Moreruela and the remains of the first Cistercian monastery in Spain. Here you will have to decide whether to continue along the Silver Route to Astorga or walk through Zamora.

If you choose to continue on to Astorga, enjoy the medieval castle of Benavente or the church of San Salvador de La Bañeza. On the French Route you will pass through towns such as Ponferrada, O Cebreiro and Sarria before reaching Santiago.

If you opt for the Camino Mozarabe, make a stop in Puebla de Sanabria to enjoy the castle of the Counts of Benavente and get close to the lake. Enter Galicia through the province of Ourense and in its capital enjoy the Burgas, the Cathedral and the river Minho.

When you arrive in Santiago, go to the Post Office (Rúa do Franco, 4) and leave your backpack, bike or walking stick in the left-luggage office or send them back home. Once you are free of charge, visit the Cathedral, explore the old town and enjoy the Galician gastronomy.

So much for our tour of the Camino Mozarabe - Via de la Plata, an itinerary to which we add one last recommendation: avoid walking it during the peak summer months.

Temperatures are usually very high in the months of July and August and the shadows are scarce, which can cause problems for the pilgrim and experience burns, cramps, sunstroke and even heat stroke. To avoid this we also leave you some tips to prevent the heat from slowing you down during your Camino de Santiago.

We take this opportunity to remind you that along the Camino Mozarabe - Via de la Plata, Correos is present with its offices and services for pilgrims. In all of them you can hire the Paq Bicicleta, to send the bike to the starting point or return at the end of it.

Also available is the Paq Peregrino, which allows you to send suitcases or packages to any office on the Camino de Santiago, including Santiago. We store them so you can pick them up on your arrival and go on pilgrimage unburdened. From Ourense is also available the Paq Mochila, the daily luggage transport service from accommodation to accommodation.