The most famous pilgrims of the Camino de Santiago 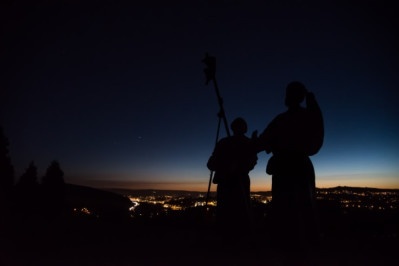 Today we highlight some of those icons that accompany us in our pilgrimage to Santiago and we invite you to share with us those statues with which you didn't resist to take a photo, your favorite sculptures or simply those that surprised you most during your journey through the Saint James's Way. 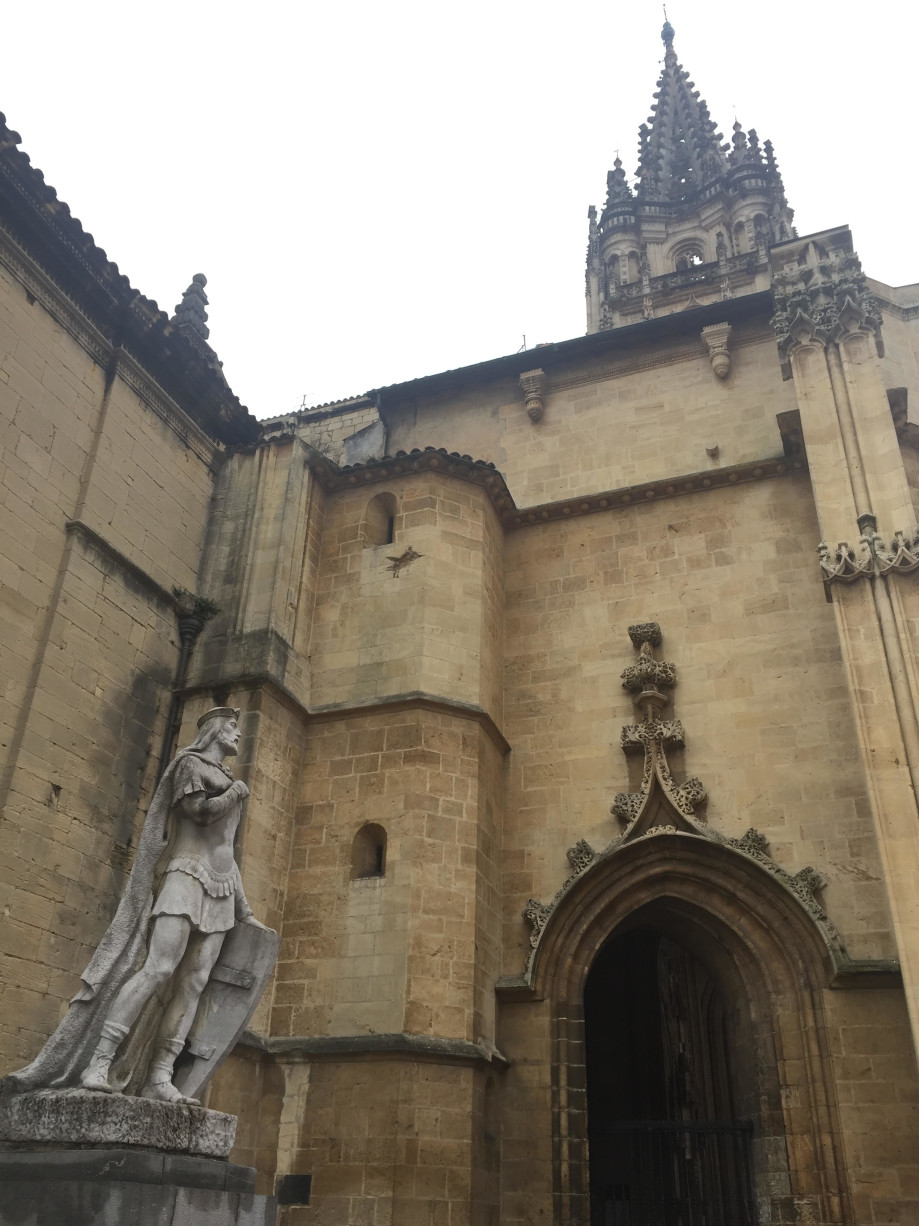 We start our tour in front of the Oviedo's Cathedral. And we do it with the only statue on this list that is a pilgrim but it doesn't look like it. We refer to the statue of King Alfonso II, the Chaste, considered the first pilgrim who traveled the Camino to Santiago de Compostela. Advised by the bishop Iria Flavia about the discovery of the remains of the Apostle, Alfonso II the Chaste began in 1.197 a pilgrimage route that remains alive until today. The sculpture, made of stone, is the work of Victor Hevia and is dated in 1942. 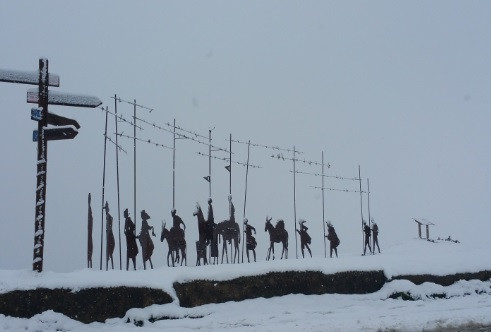 Much more recognizable are the silhouettes that pilgrims find in the known as Alto del Perdón (Navarra), located in the stage that separates Pamplona from Puente la Reina. "Where the wind path meets the path of the stars ..." This is the inscription that accompanies this row of pilgrims wich represents the different figures of medieval pilgrims marching in groups. The monument dates back to 1996, it is built in iron and stands in the place occupied until the mid-nineteenth century by a chapel dedicated to the Virgen del Perdón (Virgin of Forgiveness) and a hospital for pilgrims. 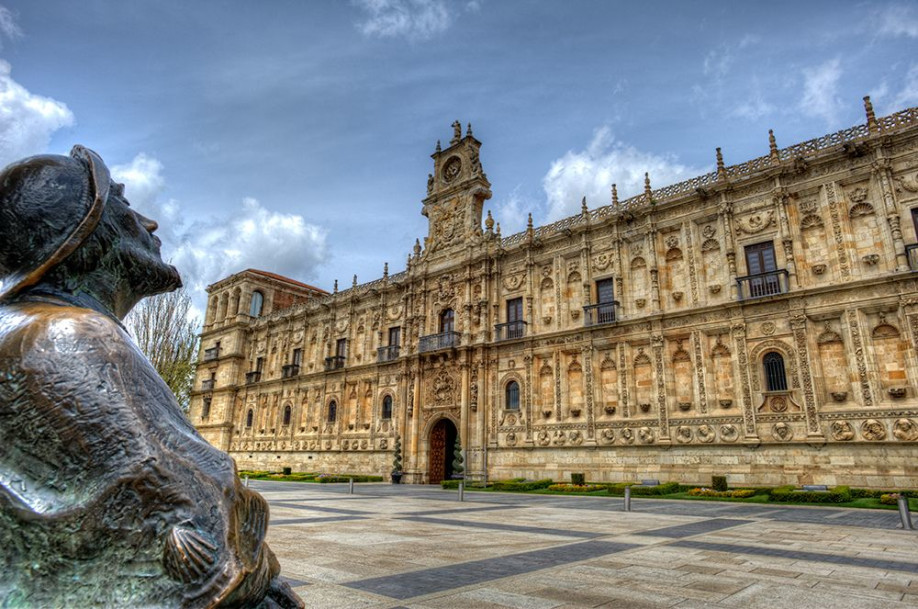 In the province of Burgos we can find several well-known statues dedicated to the pilgrim. Although perhaps the most famous is the one in front of its majestic cathedral, in the Plaza del Rey San Fernando. Made in bronze by Teodoro Antonio Ruiz, the sculpture of a pilgrim resting on a bench is one of the most photographed prints by pilgrims heading to Santiago.

As much or more known is the one we found in front of Hostal de San Marcos, in León. Donated by the Board of Directors of "Paradores de España" to pay tribute to the large number of pilgrims passing through the city, it is one of its most representative monuments. The work, made in bronze, is by the sculptor Martín Vázquez de Acuña and nobody who has made the Camino and passed through León has gone home without a photo in the company of this pilgrim. 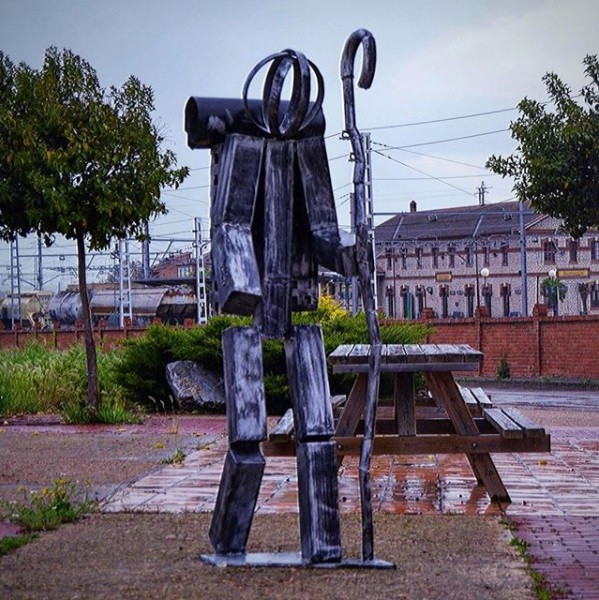 But before reaching León, we stop for a moment in Sahagún to admire one of the most modern sculptures of the Way. It is a metal statue made by the sculptor Samuel Mencia Rodríguez. And in Mansilla de las Mulas, in the place where the Camino de Santiago and the Roman Trajan Way converge, we find a curious monument that pays homage to the pilgrims who pass through this town of Leon. The monument is made of stone and consists of three pilgrims, one of them sleeping soundly. 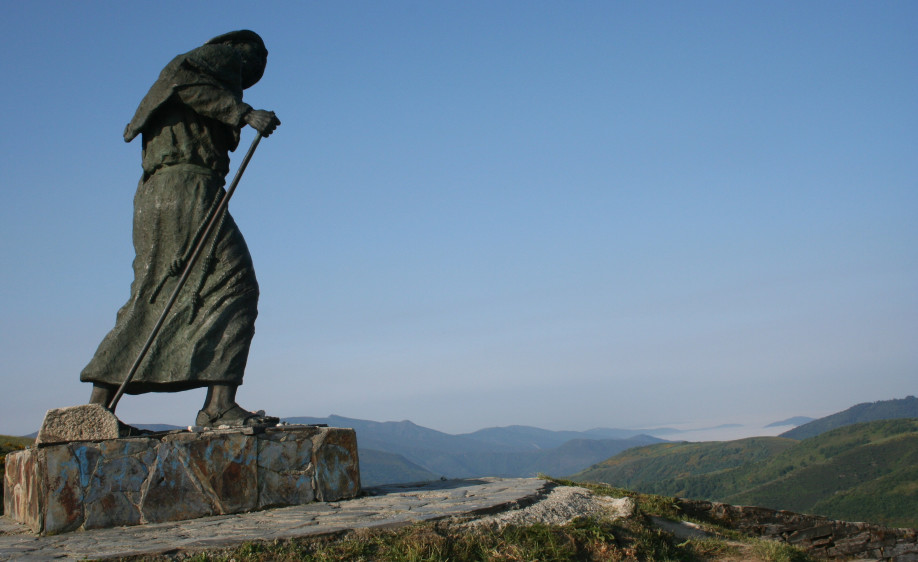 The pilgrim of O Cebreiro, an emblem

The pilgrims that cross the French Way have a mandatory stop in one of its hardest ports of the Route: the Alto de San Roque, 3 kilometers from O Cebreiro. And there is one of the most famous sculptures of the Way: that of a pilgrim made in bronze advancing against the wind. It is an emblematic work of the Galician sculptor José María Acuña that was installed in the Xacobeo of 1993. 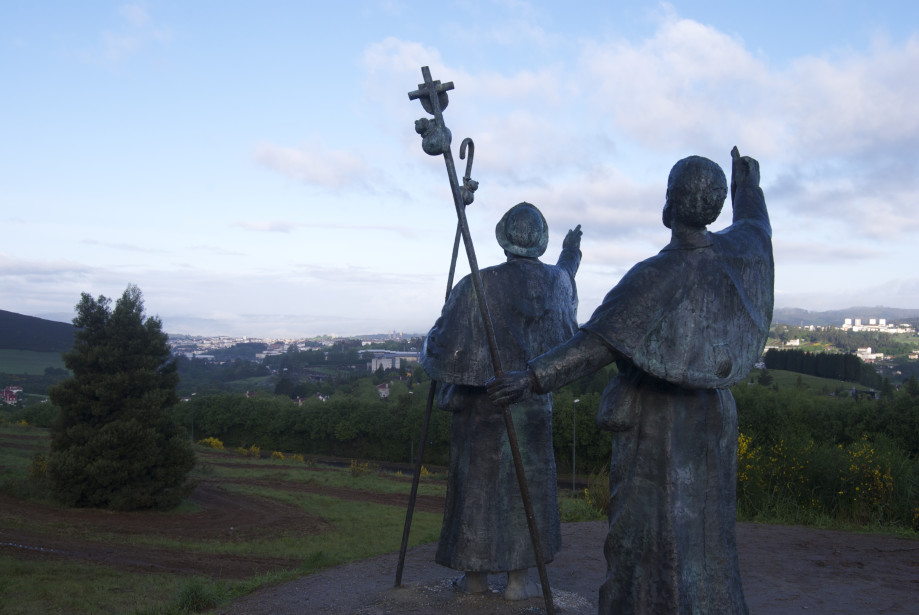 About to finish our route and reach Santiago de Compostela, the so-called Monte do Gozo offers the first views of the peaks of the Cathedral from a sculptural set that not many visit. This is the Monument to the Pilgrim, consisting on the figures of two pilgrims who point out the direction to follow to reach the end of the Camino.

And we finished our tour just as we started it. With the figure dedicated to Alfonso II, El Casto, which can be found in the old town of Compostela. It is a copy of the one in Oviedo and made by the same author, leaving evidence in both cities of the importance of the first pilgrim who made the Camino de Santiago.

We know that there are many more monuments dedicated to the pilgrim along the different roads that arrive in Santiago. This has been our particular selection. And now we ask you to continue completing this particular album of images, sharing on Facebook, Twitter or Instagram your photos with statues, figures or works of art in which the pilgrim is the protagonist. We are waiting for you and have a nice Way!