The Camino de Hospidepor: “It is not necessary to move your legs to experience difficulties.” 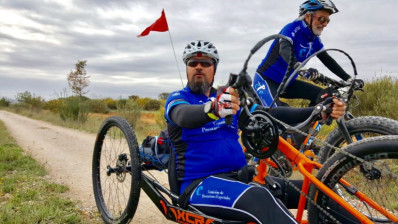 The list is long and each one has its own goals for the Camino. In all a series of values are present that we wanted to summarize in the initiative: The Values of the Camino in 12 months. One of the most special is that of Integration, which allows all kinds of people to feel involved in the mission of completing the Camino to feel equal in their efforts.

Today we're going to talk about a Camino de Santiago that conveys emotion and dedication. It is a route from Astorga to León, made by a team of 5 people with a diversity of functions and 6 companions. These are the patients and professionalsof the Asepeyo de Sant Cugat Hospital.

Doctor Josep Barrachina is one of the heads of this Camino de Santiago, which is part of a programestablished in the mutual ASEPEYO, through its Special Benefits Committee, baptised as theSport Hospital or Hospidepor.

For the second consecutive year, last June they arrived to Santiago de Compostela from Astorga. The patients travelled a total of 250 km in handbikes adapted for those with lower mobility problems, accompanied by workers.

Dr. Barrachina summarises the purpose of these activities "aimed at persons with different degrees of disability," which are designed for the "conservation and improvement of physical, sensory and mental capacities that have been restored through conventional rehabilitation treatment; trengthen their self-esteem by increasing confidence in their abilities and favouring the process of integration and normalization of these people in society," according to Josep Barrachina.

He explains the timing of this method that takes place "once they have completed or paralleled their conventional treatment and once pains, inflammations or wound healing has disappeared or minimised."

One person under this treatment is Ricard Hernández, member of this expedition. This September he'll have been in a wheel chair for 19 years, due to a spinal cord injury, and the Camino de Santiago was an old goal for him. "It's a challenge that I set out to do 19 years ago when I was recovering, but I'd been putting it off because I thought I was incapable-and this is not the entire Camino, which is the last stretch- but this has always seemed too much for just about anyone. More so, taking into a disability like mine or that of those accompanying us.”

“This sport is more than just exercise, there is an emotional reward.”

His injury, like many others, has not prevented him from leading an active life. Ricard was a wheelchair basketball player until he left 9 years ago to spend more time with his family. But the possibility of living a more sedentary life can lead to moral downfall: "This program has been launched for people who have been emotionally broken down and have bruised souls, so to speak, and this sport is more than exercise, it's an emotional reward."

Why the Camino de Santiago

Hospidepor activities include winter skiing, summer surf paddling and handbike riding throughout the rest of the year. But the Camino is special activity that is done simply because" many people would be excited to do it, it's that easy," Barrachina tells us and relates that because "these injured people are normal and have the same dreams as any other human, we speak of normalisation and not of integration. They are integrated, it is society that segregates them with mental and physical barriers.”

“They are integrated, it is society that segregates them with mental and physical barriers.”

Josep also adds that "if, for a moment, we put ourselves in the shoes of these injured people, I am sure we would want to travel the Camino and say when crossing with another pilgrim, as always, as if it were a mantra: 'Safe travels,' get a stamp at a hostel, participate in the pilgrims' masses-whether or not a believer-and become part of a community of pilgrims forever.”

Although for this, preparation has been indispensable for Ricard and his companions: "In the case of a person like me with a spinal cord injury, it is not more important, but more difficult, if possible, because of the difficulties that I have because I am unable to move my legs and have to do everything with my arms.”

Additionally, moving the bike with your arms brings an added difficulty: “They are shorter fibres that collapse with blood, they need more oxygen because there is a lot of movement." This means that before the Camino, Ricard had to prepare himself with weights and traversing many kilometres with the handbike.

On the other hand, he emphasizes the mental work: "I think that the subject of psychological pressure is most important for the pilgrim. Not being able to do something influences how the experience goes.

"And in this field is the work of professionals like Doctor Barrachina: "With Pep [Josep Barrachina], we have very important psychological support. It is a fundamental pillar in our expeditions.”

With him and the whole team of professionals, the relationship "reached another level" for Ricard: "Being in the hospital, if you see them there, you don't just say 'hi, how are you?', or shake their hand. Now it's hugs and kisses...An important bomb has been created. Much stronger than I thought. With him, before all this, he treated me like a doctor, now he is much more than a doctor. He is a companion.”

“If you can become the person you were before on an emotional level, physicaldifficulties can be overcome.”

Thus, on the Camino, the doctor-patient relationship changes plane, equalling them as companions and allows the patient, who usually receives the help, to also be a pillar of support for professionals: "He has even changed perception with respect to our disability. In the sense that you if you become the person you were before on an emotional level, the emotional difficulties can be overcome.”

The tables turn despite the injuries: “Sometimes the help is not just picking up and giving a push. It's not just fixing a puncture, help is much more. Sometimes kind words lift you up. The relationship with them is transformed from patient-professional to a group of friends who are travelling the Camino de Santiago.”

Dr Barrachina also sees this: 'From the multidisciplinary team and patients we spoke of at the beginning, a skein has become so thick, it's difficult to find where it starts and where it ends.”

This year, a moment on his Camino exemplifies the atmosphere of mutual help: "One of the workers from Asepeyo (who is in charge of maintenance) fell on the second on the day, arriving at Herrerías to climb O Cebreiro, and a metatarsal and finger was snapped. His hand was shattered. Pep, who is a traumatologist, went to work. He couldn't continue that day, but he was making compressive bandages with the shape of the handlebar, and continued every day until Santiago," comments Ricard.

“It is not necessary to move your legs to experience difficulties.”

He summarises: “Help comes in both directions. They are professionals, they are the ones who 'pull us up,’ but then there is a balance: "we are people with difficulties, but everyone experiences this. Anyone who gets on a bike experiences it, even if it's because 'I thought I was arriving and I didn't arrive.'". It is not necessary to move your legs to experience difficulties.”

“On the Camino, there is something. Something that imbues youand makes you help everyone, not just those around you.”

Nonetheless, the handbike has added complicationsthat both Ricard and Josep quickly identify.

Ricard impinges on his own posture: "I am sitting instead of lying down, because in the mountains you need to see everything in front of you, like branches. Those on the road are lying down." The size of the bicycles is another factor, since many routes are outside of the usual paths: “The main problem we have on the Camino from Astorga to Santiago is that we cannot go down the Camino itself. Of the 250 km we will have travelled, 15 are through the Camino. Because are chairs are wide and we carry two wheels behind us. Mine is small and yet is still 70 cm wide. Additionally, the front wheel is far ahead, which is what we're talking about a machine that is 70 cm wide and more than 2 meters long. They are long machines and cannot go the route.”

On the way down, things get even more complicated, as Josep Barrachina points out: "On the Camino from Astorga to Santiago de Compostela, there are hard stages, like the ascent to the Iron Cross and the subsequent dizzying descent from El Acebo to Molinaseca. This descent-already dangerous for bikes-becomes very dangerous for handbikes, because of the risk of overturning, if curves at high speeds are not negotiated well. 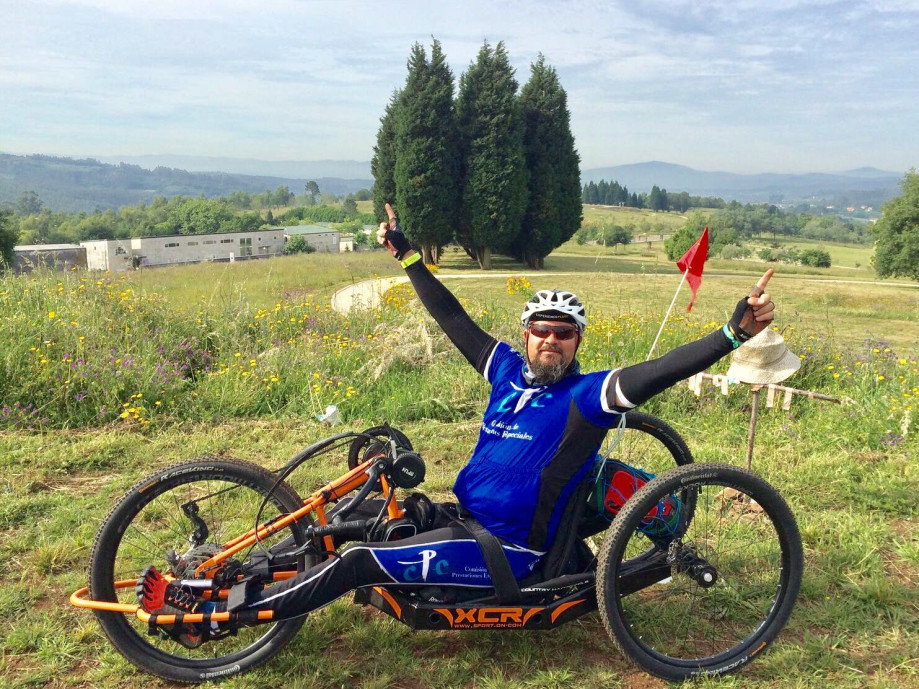 Speeds that we have to try to reduce, as Ricard tells us, conveying his experience: "There is a lot of speed without even pedalling because [with the handbike] we weigh more, it's what has the most gravity [laughs]. So there are those who try to assuage it, who tell you to take care of it because when you want to brake, then your disc brakes are going to warm up and then you won't slow down. So that's my job, too.”

But, finally, it is still necessary to face confront the bitter reality, which Dr. Barrachina points out with a hint of irony: "Using the Galician saying: We don't believe in barriers, but habelas, hailas. I'm not referring to geographic barriers, those are there and they have to be faced and overcome with more or less effort. But there are other barriers that hinder the journey, for example: the scarce supply of hotels with adapted and accessible rooms. Barriers continue in restaurants: "Let's not discuss restaurant toilets, almost all of them have adapted bathrooms, to follow current legislation, but it is common to open the door and find drink storage or a 'broken' sign. The percentage of bathrooms that are broken or out of use is very high.”

The latter is a very important piece of information to consider that integration goes beyond treating people as what they are: people, but there are still more barriers, other than mental ones, that have yet to be overcome.

From here, we sign off with the usual pilgrim salutation

**Bonus: The results of this program were made by subjective assessment of the patients themselves, and an objective test, the GAS Method (Goal Attainment Scaling), valuing the different objectives that we had initially raised (social relationship increase, self-esteem increase, increase in autonomy and physical capacity), as global program acceptance: