O Cebreiro, the town of the Camino 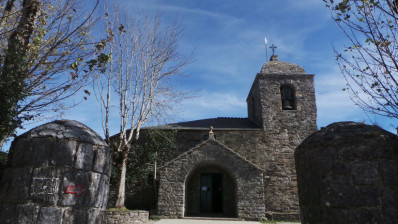 O Cebreiro is the main gateway for pilgrims to Galicia. Historically linked to the Camino de Santiago and laden with strong symbolism, this Lugo parish became the epicentre of the Route's recovery thanks to the work of its parish priest: Elías Valiña.

Today we’ll tell you more about the Jacobean tradition linked to this town dedicated body and soul to the Camino de Santiago.

To do this, we took a walk down its cobbled streets surrounded by mountains and talked to José Manuel López Valiña, descendent of the parish priest of O Cebreiro, a resident of this town and owner of one of its stores: Grialia, opened in 1999 across from the church of Santa María A Real.  Because with thousands of pilgrims coming from all over the world, O Cebreiro is, as José explains, much more than a stage on the Camino or a lost city in the mountains of Lugo: "O Cebreiro is the centre of the world.” 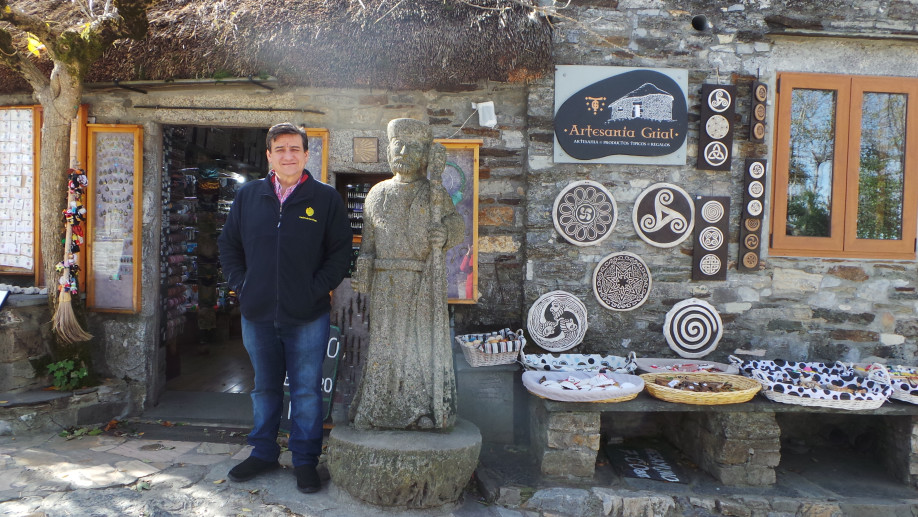 Located at 1,293 metres above sea level, O Cebreiro welcomes pilgrims arriving from El Bierzo through the Camino Francés. Historically linked to cattle, O Cebreiro is today dedicated to providing pilgrim services. Formed by a dozen houses, the Lugo parish has the first Ethnographic Museum in Spain, in addition to the oldest church on the Camino de Santiago: Santa María A Real. The hermitage, founded by Benedictine monks in the ninth century, receives walkers after a 7-kilometre climb that is sure to leave you out of breath.

Inside, the pilgrims comes face to face with a symbol that has put Santa María A Real on the map: it is the chalice that, according to tradition was used during the Last Supper. The cup, which occupies the central part of the shield of the Galicia, is also the protagonist of a miracle that took place in the fifteenth century, by which wine was turned into blood during the celebration of the Eucharist performed by an unbelieving cleric. Santa María A Real also houses the tomb of one of the most important figures in the revitalization and recovery of the Camino de Santiago, as well as its own Cebreiro: Elías Valiña. 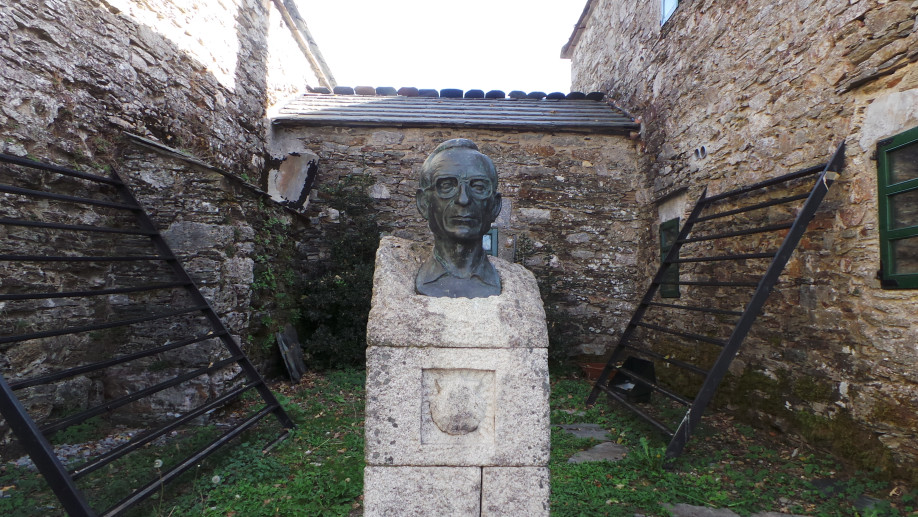 Immersed in the studies of the Camino throughout his life, Elías Valiña began to promote the pilgrimage to Santiago in the 70s. A tireless researcher, he dedicated decades to mapping out what we know today as the Camino Francés, initiating the signalling of the route with the now-traditional yellow arrows. Right in front of the church is now the Grialia store, owned by his nephew José Manuel López Valiña. "Elías Valiña was a visionary. Not only did he contribute decisively to the resurgence of the Camino, but he also O Cebreiro, making it possible for neighbours to live the town in a dignified way without having to emigrate. Without him, O Cebreiro would not exist," he tells us as he contemplates the bust of the parish priest located next to the church.

A brief visit through O Cebreiro shows that his words ring true. The pilgrim who comes to this Lugo town has all the necessary services: hostels, restaurants, shops, public hostels an even a small tourist office. A lot has changed since the 70s when 2 or 3 pilgrims arrived. "They had to be romantics. People who arrived and we didn't know very well we let sleep in our homes," José remembers. Now thousands of pilgrims revitalize O Cebrieiro every year, especially in the months of May, September and October. 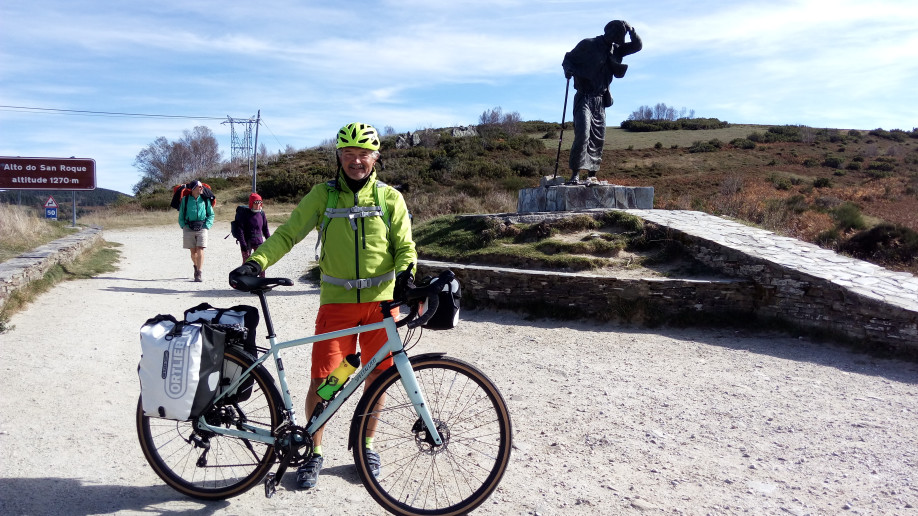 On the three streets crossing the town we can hear a plethora of languages: English, French, German, Korean, Mike is one of the thousands of pilgrims who arrives every year to O Cebreiro. He has been travelling the Camino for five weeks from Switzerland and has taken a break to recover his strength and follow the route that will take him to Santiago in a pair of days. We accompany him to the top of San Roque while he tells us about the hospitality and good experiences that his pilgrimages have given him. After him, Anke arrives, from Berlin. And then Carolina and Enmanuel from Argentina, accompanied by Oaine, from the Basque Country. The three began their route in Roncesvalles  and, like so many others, their friendship began on the Camino. Although from different parts of the world, they launched their Jacobean adventure with a common motive: to find themselves.

"This is the daily tonic. People arriving from all over the world, who share their dreams along with their sorrows," José tells us, for which his uncle's phrase, "O Cebreiro is Europe's Main Street," falls short. "The Camino allows you to travel to a hidden village in the mountains of Lugo and, at the same time, be at the centre of the world. There is no greater university than this, as long as you are open to listen." And José is. In fact, he confesses that he has the best job in the world, a job where you meet very diverse people without leaving your own home. "Some pilgrims have a strong spiritual charge, others come for sport and most to solve internal problems or because they need a lifestyle change. But what is common to all is the humanity that the Camino imparts." 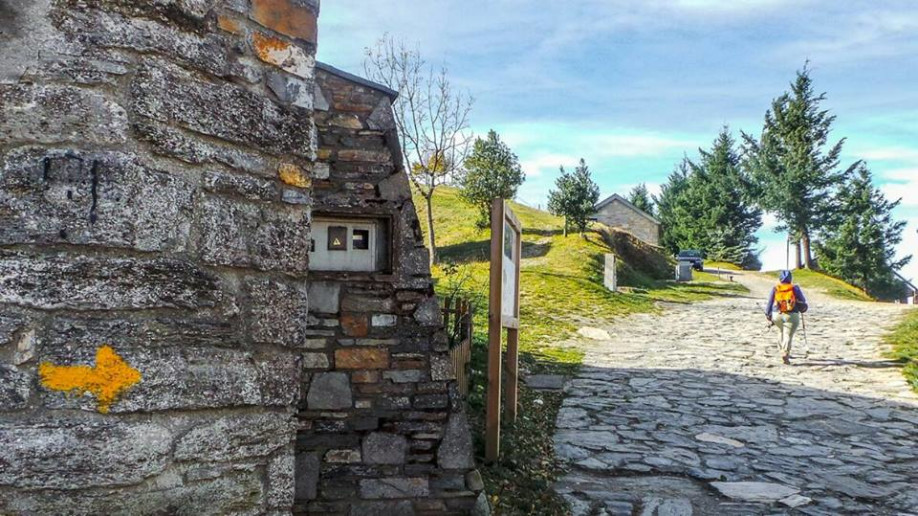