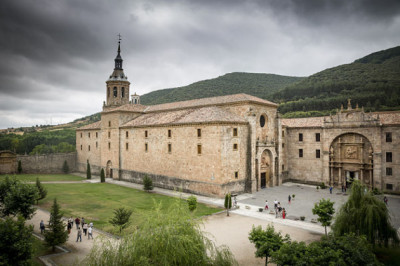 The Camino de Santiago crosses, along all its Caminos, an enormous number of centuries-old towns and villages where you can breathe in the history each step of the way.

Therefore, it is not difficult (rather the opposite) to find all kinds of buildings that have been there for centuries, forming part of the imposing journey framework for thousands of pilgrims who have travelled that same path before us. Have you ever thought about sleeping in one of those places?

If your answer was yes (and even if it was no), today you are in luck, because we’re going to show you some of the most incredible monasteries on the Camino de Santiago where you can spend a night during your trip.

Monasteries have been a fundamental part of the development of the Camino de Santiago as we know it today, not only for their aid and services to pilgrims that passed through their doors, but also because of the way they influenced people from different towns along the Camino.

Nowadays, even though they no longer have the importance of centuries past, they remain vital for the Camino de Santiago, this time from a much more romantic and traditional point of view rather than a practical one. If you have always wanted to stay in a monastery on the Camino de Santiago, keep reading this article and we'll share some of the best with you.

Located a short distance from the historic old quarter of Sarria, at the end of stage 26 of the Camino Francés, this hostel was built in the thirteenth century and housed the order of the Mercedarios for more than 120 years. It has all the comforts that a pilgrim needs and the best part is that it's impossible to miss: the Camino passes right in front of its door.

At stage 5 of the Northern Camino, you can stay at this beautiful monastery whose origins herald back to the ninth and tenth centuries, from which a pre-Romanesque sillar and sepulchral roofs have been recovered. The hostel is open every day except Christmas Eve and has a total of 24 beds. Since it isn't a public hostel, the price is around 35 or 40 Euros depending on the time of year.

Built during the last third of the sixteenth century and finished two centuries later, the Monastery of San Martín de Pinario is located at the Plaza de la Inmaculada, just 100 meters from the Cathedral of Santiago. The place was founded by a group of Benedictine monks who settled there after discovering the remains of the Apostle. Today it fulfils the same function it’s had throughout history: to receive pilgrims from the Camino de Santiago.

One of the essential stops that pilgrims always recommend. At stage 26 of the Camino Francés you'll find this incredible building belonging to the Benedictine order that was founded in the sixth century. The Monastery of Samos has different parts built in distinct eras due to the various reconstruction over the centuries. Thus, it is a Baroque church from the mid-eighteenth century, with a large cloister from the end of the seventeenth century and a small cloister from the sixteenth century, making your stay at this hostel completely unique. 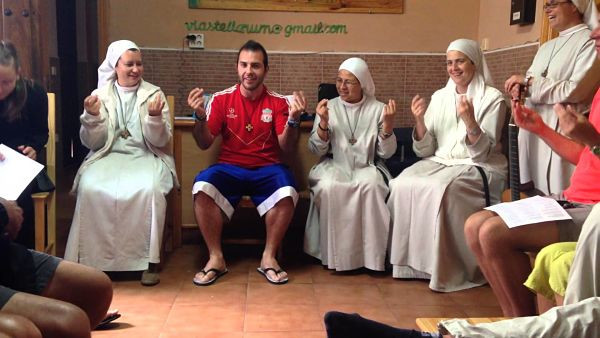 To close the first of the articles dedicated to the Monasteries of the Camino de Santiago that provide accommodation, we'll now discuss the Santa María Parish Hostel. Although not built in an old monastery, but a parish, the reality is that the construction of this Romanesque building is well worth a small detour and we've included it on this list. Located at the end of stage 15 of the Camino Francés, this unique hostel for pilgrims is cared for by the Augustinian Sisters, who hold a musical gathering every evening with the pilgrims.

We've come to the end of the first part of this article dedicated to the monasteries of the Camino de Santiago that offer accommodation on your own Camino. As you'll see, some are public while others are private, which will make your stay a bit more expensive; this choice always depends on your personal preference and your Camino budget. We hope that you have enjoyed this article and it helps you to best prepare for your Camino. If it has, don't hesitate to share it!

Comments
Kris Entwistle
Hello, I'm planning to walk the French Camino in September. Do these holy buildings provide meals? As well as do you need to book ahead? Thank you. Kris Entwistle May 17th 2022
El camino con correos
Hello Kris. Some of these monasteries do provide food. And most take reservations. It is best to check with each one individually. Buen Camino!
Mark
Hi, I plan to walk the Camino from Saint Sebastian to Santiago midd September onwards. Having already had the privilege off completing the French Camino in 2015. I would, if possible like to stay at any Holy build along the way. Can I book before? Is it necessary? Please enlighten my path. In gratitude, Mark Entwistle.
El camino con correos
Hi Mark. In Santiago and Zenarruz it is possible to book before. Buen Camino!
Gwendolyn Seeley
Are there private sleeping rooms in the hostels?
El camino con correos
Hi Gwendolyn. Yes, you have private rooms. Buen Camino!
SEE MORE COMMENTS