That the Camino de Santiago is bedevilled with historical places is as obvious as the sun rising every morning. But when we tell you that many of those places not only allow visitors but also guests, the situation changes significantly.

There are many hotels, hostels and guesthouses along the Camino that are located in centenary buildings, but the monasteries are what most attract the attention of pilgrims, since they provide a unique experience akin to time travel.

A few weeks ago, we discussed the first part of the list of monasteries offering accommodation on the Camino de Santiago, so today we've decided to continue that list to show you five more places where you can spend the night during your Camino.

The Leyre Monastery is undoubtedly one of the most important monastic complexes in Spain, since it has a history stretching an entire millennium: the first historical documentation is found in a letter that Saint Eulogius wrote to Wilesindo, the bishop of Pamplona, in 851, recording his stay at the monastery three years earlier, in 848. In that letter four other monasteries are named from the Navarre and Aragon areas, but it is only the Leyre Monastery that stands after 1100 years and in full monastic functioning.

The present building of the Leyre Monastery, however, does not date back that era but is much more "modern", since it was constructed between the sixteenth and seventeenth centuries. Of a purely Aragonese style, this four-storey building stands out not only for its architectural beauty but also because of its incredible location, a place with breath-taking views that will form part of some your most cherished memories of the Camino.

With a history defined by the Camino Jacobeo, the present Parador de Leon was originally conceived as a pilgrims' hospital, whose building was ordered by the princess Sancha de Castilla, sister of Alfonso VII of Leon, in 1152.

The current building, one of the architectural jewels of the city, was constructed in different stages between the beginning of the 16th century and beginning the 18th century. Of a Renaissance flair, its two-storey plateresque facade astonishes those who visit, making it one of the most important buildings in the city, just behind the famous Cathedral.

At the end of the first stage of the Camino Francés, this beautiful hotel awaits us, located in used to be a monastery, which is completely renovated. Its location is easy find for any pilgrim, since it is attached to the Real Colegiata de Roncesvalles and impossible to miss.

The hotel offers several services for pilgrims, including transfers to Saint-Jean-Pied-De-Port, a pilgrim menu and luggage transport. It is completely renovated so it doesn't offer the authentic monastic experience, but is still steeped in history worth knowing.

4 km from Pontevedra, through the Camino Portugués, you can find this ancient monastery whose history begins more than one thousand years ago (the first documentation is from 942, although it is said to have existed since the 7th century).

Attached to the old Benedictine monastery currently occupied by a community of Mercedarian friars, the Poio Monastery Guesthouse is a building constructed in the middle of the last century that has a similar construction to the monastery itself, since it has two parallel patios, a chapel and large rooms.

The location of the Poio Monastery is perfect for the pilgrim who wants to take nature's beauty: embraced by two streams that end in the estuary of Pontevedra. Absolutely spectacular. 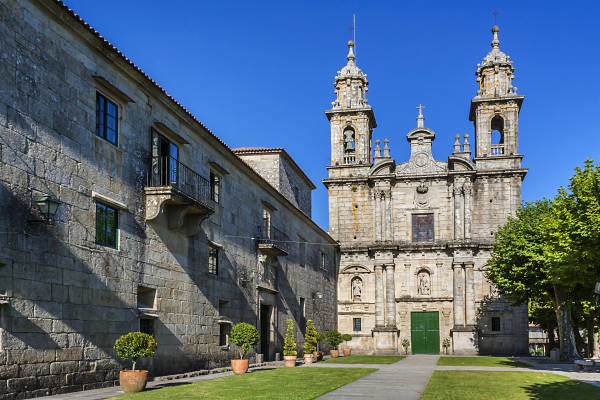 The origin of this monastery dates back to 948, when it was founded and dedicated to San Juan Bautista, with the dedication later changing to San Zoilo during the eleventh century. It is said that the monastery allowed pilgrims to eat all the bread and drink all the wine they wanted, which made it famous along the Jacobean route.

There are not many remains of the first monastic buildings beyond some walls, since it was rebuilt at the end of the 14th century. Regardless of that, there is the cloister, built during the 16th century, and the temple from the seventeenth century, the two most outstanding aspects of the current architectural complex.

We’ve reached the end of the second part of our article on monasteries that offer accommodation on the Camino de Santiago. As always, we hope that you’ve enjoyed this article and it’s helped you to plan an incredible stay during your Camino. If it has, don’t hesitating in sharing it and signing up for our newsletter to keep up to date with all our updated website content. See you next time and Safe Travels!