Marcelino Oreja: The pilgrim is the synthesis of our history 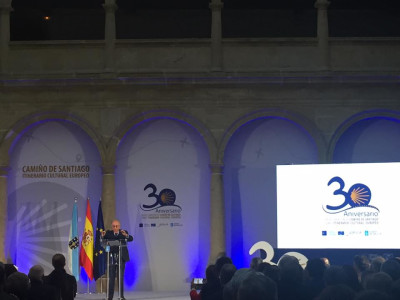 This week Compostela reached the 30th anniversary of the declaration of the Camino de Santiago as the first European Cultural Itinerary. A symbolic date that has allowed us to share a few hours with one of its principal promoters: the jurist, politician and Spanish diplomat Marcelino Oreja, former Secretary General of the Council of Europe.

Today in our blog, we've collected some ideas borne during his stay in the capital of Galicia, among which are the Europeanist dimension of the Camino and the validity of the Jacobean values. 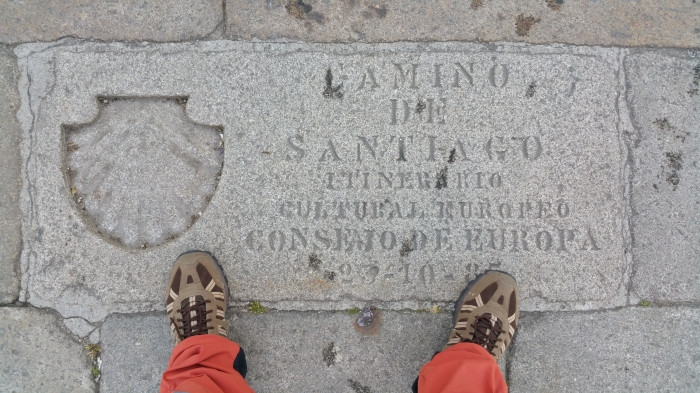 Thirty years after the Camino de Santiago was declared a European Cultural Itinerary, Marcelina Oreja believes it is very much alive. A perception that has existed since 1987, despite the fact that the number of pilgrims was significantly lower: about 2,905 pilgrims compared to 278,224 that were registered in 2016. "It was decided to recognise the Caminos de Santiago as an example of intercultural dialogue and to highlight the diversity of Europe. One and many. With complementary and antagonistic memories," Marcelino Oreja says.

This reality was evident in the European tour that representatives from the Council of Europe took to 18 countries that were then members of the EU. "The Camino left a deep mark on the continent," says the Spanish politician, who not only found evidence of the Jacobean tradition in the different territories but also a deep interest in the pilgrimage to Santiago. Thus, for example, in Nordic countries, he discovered that the Vikings had already had contact with the Camino and in the Baltic States with a good number of chapels, churches and itineraries to Santiago, as in the United Kingdom or, of course, France. The last evidence was found in Liechtenstein, where the ruling Prince declared himself an enthusiast of the Camino, promising to approve the Declaration of Santiago de Compostela under his turn of European mandate.

Europeanist dimension of the Camino de Santiago
As we’ve discussed in a previous article, The Declaration of Santiago de Compostela sought to revitalise the Camino through six measures: identification of routes, election of a common emblem, restoration and enhancement of the natural and architectural image, promotion of Jacobean research and promotion of permanent exchange between territories passing through the Camino, as well as the artistic and cultural creation disseminating the values of common identity. For Marcelino Oreja, this Declaration remains valid and true to the teachings of the Calixtino Codez, which had already marked itineraries and stops in the 12th century that thousands of pilgrims continue to travel in the present day.

And for Marcelino Oreja, the pilgrimage to Santiago allows a ready that goes beyond the spiritual one. "The Camino unifies the different cultures," say the former Secretary General of the Council of Europe. Because the Caminos that go to Santiago are, in turn, routes of civilization through which Romanesque art, the epic and lyrical literature of the troubadours, the music of the upper and lower classes, the monastic architecture and even cities run through, giving rise to a linear urbanism throughout the territory.

A Europeanist vision that Marcelino Oreja shares with Pope John Paul II and the connects with the  speech given by the Pontiff in the Plaza del Obradoiro at the end of his tour of Spain in 1982. “Europe finds you. Be yourself. Discover your origins. Feed your roots. Relive those authentic values that made your history glorious and your presence in other continents beneficial.” “Overwhelmed by the current Euro-pessimism, this is the voice that should resonate in our consciences. We must develop a European space, a Federation of national States. Europe should not be bureaucratic, but rather democratic,” he adds.

Recovery of pilgrim values
Because for Marcelino Oreja, the values of pilgrimage -solidarity, shared effort, coexistence, dialogue, knowledge of the other- are the true European values. "The pilgrim is the synthesis of our history," says the Spanish politician and diplomat, who reminds us that today, like yesterday, those who walk towards Compostela become transformed into another person: they have found themselves. "The route to Santiago keeps its secrets only for those who travel it. And its values are what we need to recover. Europe will always have a future by recovering its past and betting on the values that have made this possible: plurality, cooperation, solidarity, respect for nature, humanism and equity," he says.

"On the Camino there is something that unites and transforms. A person does not finish the Camino the same as when he or she begins it.”

The Spanish diplomat goes further and ensures that a group of pilgrims is the example of what a community should be like, with the values of tolerance and respect for the flag. "Between pilgrims, relations disappear and a "we" is built, an atmosphere of uncommon camaraderie and enthusiasm," he says.

A tolerance and respect that Marcelino Oreja raises in all fields, including in the current debate on the touristification and massification of the Camino. For the Spanish politician, motivations for the Camino de Santiago are very varied and all very respectable. Especially because Oreja firmly believes in the transforming power of the Jacobean routes: "On the Camino there is something that unites and transforms. A person does not finish the Camino the same as when he or she begins it," he says, hence many people who start the Camino as a tourist end up infected with a much deeper feeling. "Be that as it may, and because of the motivation, it must be respected.