The Camino Portugués, stamp by stamp

Beautiful scenery, welcoming towns and outstanding food: the Camino Portugués (Portuguese Way) is a wonderful road to Santiago for many reasons. It’s no wonder, then, that it is the most popular route on the Camino de Santiago (Way of Saint James) bar the Camino Francés (French Way).

With the aim of enriching this charming route, Spain’s postal service Correos is launching the Tarjeta del Camino Portugués, a tour in postal stamps of the various stages of the Camino Portugués between Tui and Santiago de Compostela.

The Tarjeta del Camino Portugués consists of a postcard tracing the Portuguese route with its various stages and space for seven special stamps bearing the unique landmarks found at each of the towns: Tui, O Porriño, Redondela, Pontevedra, Caldas de Reis, Padrón and Santiago de Compostela. This means that pilgrims can get their route certified at the different towns on the Camino Portugués as it wends its way through Galicia while discovering their most charming features as they go.

The stamp card is not a substitute for the credential of the Pilgrim’s Passport, which is required for your Compostela certificate, granted when you complete 100 km of the Camino on foot or 200 by bicycle. But it is a beautiful souvenir of your pilgrimage and a collector’s item for stamp enthusiasts. 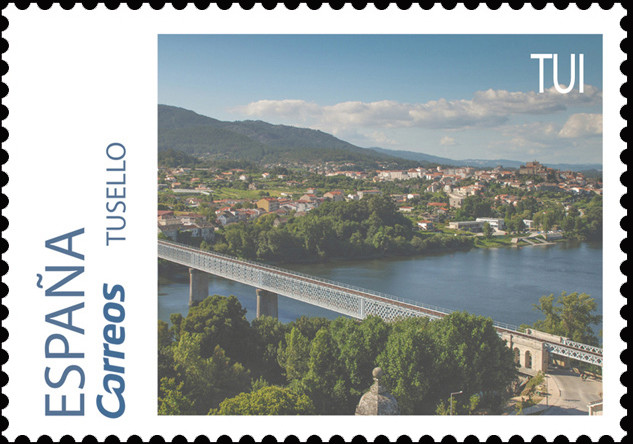 The International Bridge over the River Miño welcomes pilgrims to this stamp-themed route. An icon of the Camino Portugués, the bridge that connects Valença do Minho in Portugal with Tui in Spain allows pilgrims to cross the border between the two countries on foot. In times gone by, pilgrims coming from Portugal on the Camino de Santiago entered Galicia crossing the Miño by boat. This situation changed in 1884 with the inauguration of the bridge, designed by Pelayo Mancebo y Ágreda. The first stamp on the Tarjeta del Camino Portugués shows the bridge alongside a stunning panorama of Tui, the first Galician town on the route, with its imposing cathedral towering above it.

Porriño Town Hall, designed by renowned architect Antonio Palacios, is the subject of the image portraying the second Galician town on the Camino Portugués. Palacios was the artist behind the popular Madrid Metro logo and the Palacio de Cibeles, the building which currently houses Madrid City Council. His design for his home town council was inspired by medieval fortified cathedrals. Located in the heart of the old town, it is one of the main attractions visited by pilgrims as they pass through Porriño. 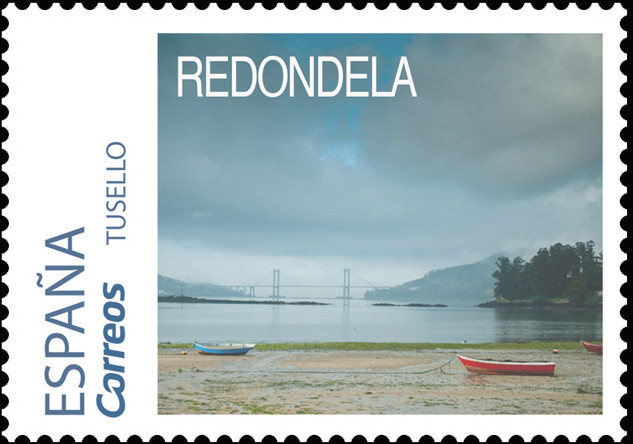 The third stamp on the Tarjeta swaps artistic legacy for natural heritage. Of the many sights that Redondela offers pilgrims, one of the most beautiful is the stunning views from the inlet of San Simón and the Vigo estuary. These are the focal point of the stamp dedicated to Redondela, with the island of San Simón in the foreground. 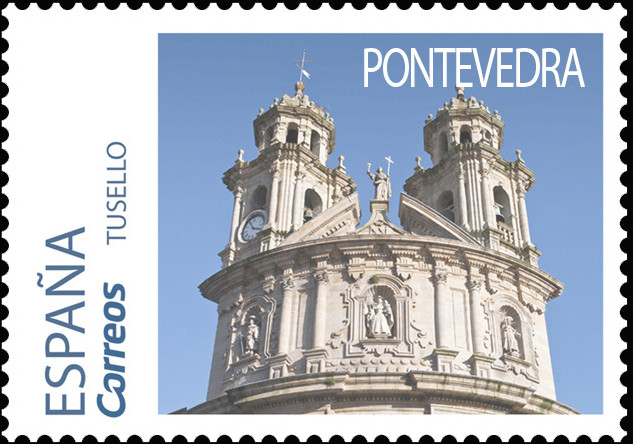 In Pontevedra, it is the Church of la Peregrina that welcomes those journeying on the Camino. One of the most symbolic buildings in the town of Lérez, the church is dedicated to the Virgin who, according to legend, guided pilgrims from southern Galicia to Santiago – hence her status as patron saint of the province of Pontevedra and the Camino Portugués. 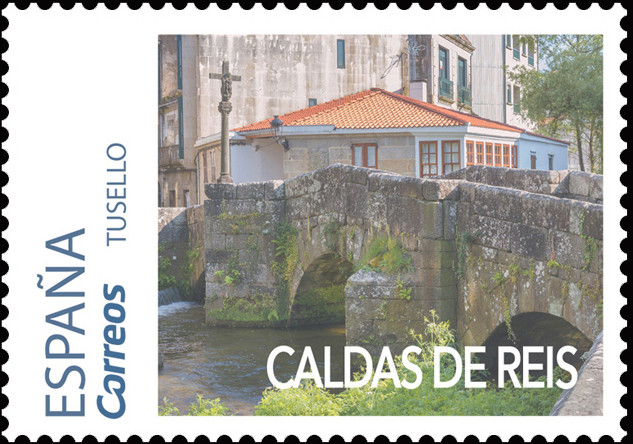 The next stop on this tour is in Caldas de Reis, whose stamp features the bridge of Bermaña, one of the most picturesque constructions in this town famed for its thermal baths. All pilgrims on the Camino Portugués must cross this Roman bridge renovated in medieval times. It has three semi-circular arches and is presided over by a cross located at the start of the bridge. 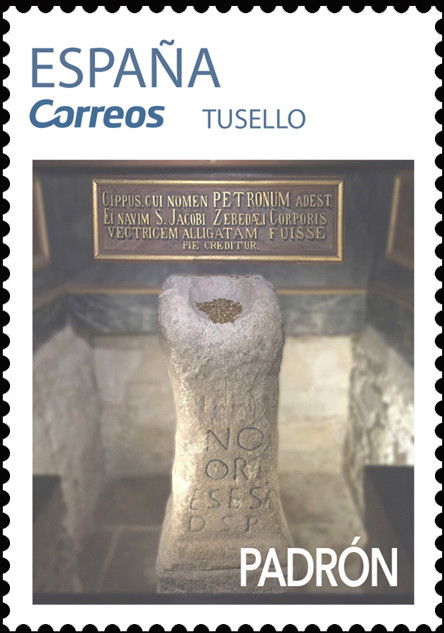 In Padrón, the Tarjeta del Camino Portugués offers us a stamp showing the Pedrón, a relic linked to Saint James which can be seen in the parish church of Santiago de Padrón. The Pedrón is a Roman milestone which, legend has it, was used to moor the boat transporting the remains of the Apostle from Palestine to Galicia. 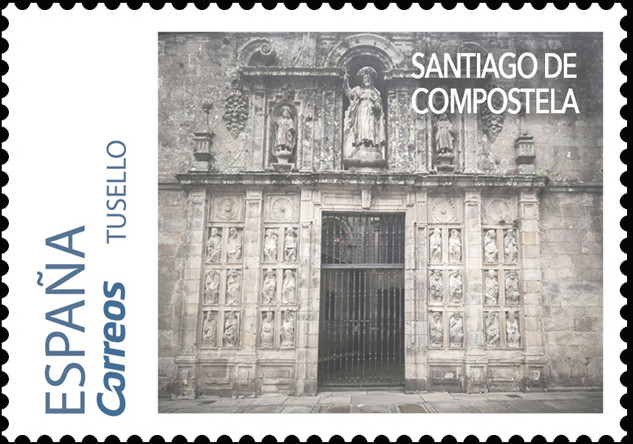 The end of the Camino Portugués is commemorated with the Correos stamp dedicated to the Puerta Santa (Holy Gate) of Santiago Cathedral, located in Praza da Quintana, above which stands none other than a statue of the pilgrim Saint James. This cathedral portal is only opened during special Holy Years, the next of which will be in 2021. Pilgrims entering the cathedral through this door will be granted a plenary indulgence.

Tourist postmarks of the Camino Portugués

The Tarjeta del Camino Portugués initiative is completed with the launch of special tourist postmarks bearing the locations at the start and end of the stages and the footprints the pilgrim leaves on their path. These postmarks – one per town – will be used to seal the stamps on the Tarjeta, as well as marking items sent from the post offices on the Camino Portugués to any point in Spain or abroad. 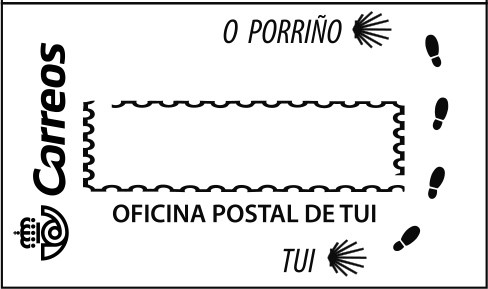 The Tarjeta del Camino Portugués can be obtained from post offices on the route at a cost of €5,25. All of the post offices on the route offer the range of services designed by Correos to assist those doing the Camino de Santiago: Paq Mochila, for those who are unable to (or do not want to) shoulder a heavy backpack from stage to stage; Paq Bici, a means of sending bicycles to a starting point on the Camino or back again on the return trip; or Paq Peregrino, which allows pilgrims to send any items they’ve bought on their journey to the end of the Camino or their home address. 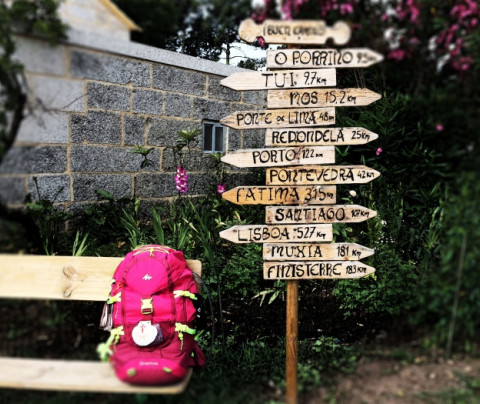