Discovering San Juan de Ortega and the miracle of the light 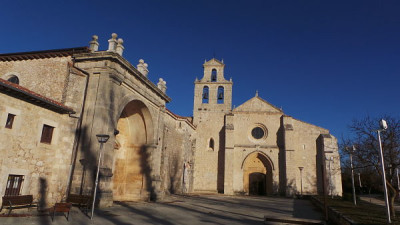 The Camino de Santiago (St. James's Way) has many places and spots which offer pilgrims a certain special magic, of that there can be no doubt. San Juan de Ortega is one of those places and, taking advantage of the fact that last week we presented in Burgos a new postmark with the image of the temple of this municipality, we decided to write this article to discuss the matter a little bit more, the postmark to which it is dedicated and above all, the temple itself, given that these days a unique phenomenon was experienced which is well worth discovering.

Located in the province of Burgos, San Juan de Ortega is the penultimate municipality of Stage number 11 of the Camino Francés (French Route). It gets its name from a saint who collaborated closely with his friend and fellow saint Domingo de la Calzada in opening up routes which would help pilgrims on their pilgrimage through the region.  Added to that was also the construction of what is today the monastery of San Juan de Ortega.

With a marked Jacobean history which dates back over a thousand years, this small municipality with no more than 20 inhabitants has a well-deserved reputation of hospitality towards the pilgrims of the Camino (Way). So much so that during spring and summer the village can expect the arrival of up to 100 pilgrims per day, receiving over five times the number of people who usually live there.

In spite of its small size, this village located in the region of Sierra de la Demanda possesses a remarkable patrimonial ensemble, in which stands out is the triple apse church of the sanctuary, which it is said to have been constructed according to the plans that St. James the Apostle himself designed.

But if something which draws Camino de Santiago (St. James's Way) pilgrims to San Juan de Ortega is its church.  A clear example of Romanesque art and style, it was constructed at the end of the thirteenth century and expanded in the fourteenth century under the Gothic style predominant at that time in Europe. There are many details worth mentioning as regards its architecture, but there is one particular element which is capable of becoming something much larger than a simple architectural ornamentation:  the capital of the annunciation.

This capital, which is also of a Romanesque style, represents several scenes of the birth of Jesus: the first scene shows the archangel Gabriel kneeling in front of the Virgin Mary announcing that she will conceive and be the mother of Jesus, followed by the Visitation of the Virgin Mary to her cousin Saint Elizabeth and Joseph's Dream when the angel announces to St. Joseph in a dream that the son of Mary would be the messenger of God and finally Christ's Nativity depicting the  birth of Jesus with the Virgin Mary being attended by midwives and the manger which is being held by the same angel, and then the announcement of the birth of Jesus to the shepherds.

The entire capital is beautiful, its carving is exquisite and the execution of the work is unparalleled, but what is most striking is not this, but the so-called "miracle of the light", an almost esoteric phenomenon which combines mysticism and beauty in equal parts.

This phenomenon occurs only during the Spring and Autumn equinox, and in which a single shaft of the setting sun strikes and illuminates the representation of the Virgin of the Annunciation from the beginning to the end in an event which draws attracts pilgrims from all over the world. The phenomenon can be seen this week from the 21st, and today will be the last time you can see it, from 6 p.m. until the next equinox.

This spectacle is capable of perfectly combining the artistic, the religious and the astronomical is a great letter of introduction for San Juan de Ortega, and it is so incredible to see that it is well worth leaving a video here so that you can watch the "miracle" which we have been discussing.

Leaving aside the capital of the Annunciation, there are other spots of the site which are well worth mentioning, as is the case of the beautiful tomb of San Juan de Ortega. Although it had been conserved for centuries in the crypt of the church, it was relocated next to the apse of the Epistle, a location which it that occupies today, following a flood in 2005.  Decorated profusely with figures, scenes and elegant reliefs, this tomb is presented as a sculptural jewel of the final Romanesque period in Spain which is well worth seeing sp as to admire in detail its delicate workmanship. 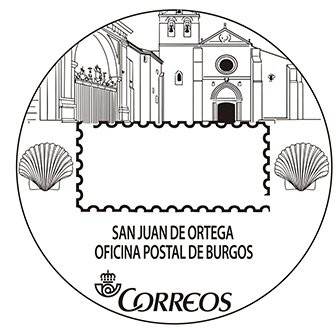 On 21 March, following our series of postmarks dedicated to the different municipalities on the Camino de Santiago (St. James's Way), we presented in the main post office of Burgos the Monastery of San Juan de Ortega postmark. With the postmark, the monastery will travel throughout Spain and outside of our borders embodied in the letters and postcards which are sent from that office. With this objective we strive that not only the Camino but also each of the many and beautiful municipalities which make it up gain visibility and recognition.

Hoping that you have liked this articles and that is has served its purpose in making you want to visit San Juan de Ortega and its beautiful monastery. Don't miss out on seeing it!

Greetings and have a good Camino!