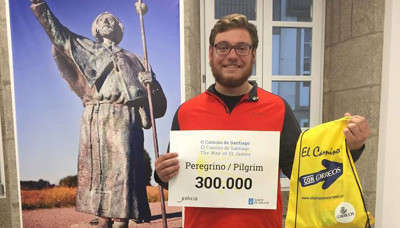 It's from Michigan. He's 22 years old. And this past 2 December, he undertook what would be the experience of his life in Leon: the Camino de Santiago. He is Andrew Patrick Larkin and this afternoon he made history: becoming pilgrim number 300,000. We had the opportunity to speak with his and discover what motivated him to complete this adventure.

"The Camino de Santiago is a fantastic experience." This is the phrase that Andrew Patrick Larkin has repeated enthusiastically since his arrival in Compostela this morning.

A historic arrival: becoming the 300,000th pilgrim. Since being officially recorded, this is the first time that the number 300,000 has been surpassed, which is a new milestone in the history of the Camino, which year after year improves upon itself. Already last year, with the arrival of 277,854 pilgrims in Compostela, historic data from the last Holy Year was broken in 2010, when 272,412 travellers arrived in the Galician capital.

Impressed by the movie The Way

Andrew could never imagine that on 2 December, when he arrived early to Leon to start his adventure on the Camino Francés, that he was going to enter the history of the Camino de Santiago.

He simply wanted to walk, reflect and discover those landscapes that had excited him in the movie The Way, directed by Emilio Estevez, starring his son Martin Sheen. "I saw it years ago in the US and I promised myself that one day I would travel the Camino," he says that after receiving the Compostela that accredits him as the 300,000th pilgrim in an act held at the Pilgrim Office and attended by the President of the Xunta of Galicia, Alberto Núñez Feijóo; and the Archbishop of the Cathedral of Santiago, Monsignor Julián Barrio.

The opportunity to fulfil this promise came this year when Andrew moved to Burgos to study chemistry and Spanish. "The Camino de Santiago and everything that surrounds it is very present. And that environment encouraged me to do it," he explains.

Like so many other pilgrims, Andrew started only from León. But very soon he was immersed in the magic of the Camino and travelled the 300 kilometres that separate León from Santiago. "One of the best things about the Camino is the people. I didn't know anyone, and I ended up making lots of friends," he tells us. Next to him is Joan, a pilgrim from Finland who started the Camino a month ago from Saint Jean Pied de Port. Together, they have done most of the route. And he number is 300,001. "It has really been a fantastic experience," she confesses.

Landscapes are another one of Andrew's favourite things on the Camino de Santiago. Despite the cold, the wind and the humidity that chills you to the bone, the 300,000th pilgrim says he enjoyed each town, each landscape and each step tremendously. "I love walking. In fact, I'm very fond of hiking. And this has been a complete experience.

"Next Tuesday, 19 December, Andrew returned home. And he knows what he's going to do first: recommend that all his friends and acquaintances in the US travel the Santiago at least once in their lifetime. "They have to come to Spain and experience this."

The Camino de Santiago, a place of encounter and reflection

Visibly overwhelmed but radiant with happiness, Andrew received his Compostela this afternoon and a document that accredits him as the 300,000th pilgrim after visiting the Cathedral this morning and attending the traditional Pilgrim's Mass. In this symbolic act, he received the Medal of the Cathedral and several books on the Camino, as well as several gifts from Tourism of Galicia to discover the charms of this land.

With Andrew, a year of records closes, since the beginning of August the Compostela was handed to 200,000 pilgrims. On this occasion, it was a Madrid native, Ángel Herrero Gala, who arrived to Santiago walking from Salamanca. Previously, on 22 June, Santiago received 100,000 pilgrims, Brazilians Juliano Pivato and Eliezer Ribeiro Antunes Junior, who travelled the entire Camino Francés from Saint Jean Pied de Port.

However, despite the importance of figures, both the president of the Xunta de Galicia and the archbishop of Santiago, declared this afternoon that the Camino de Santiago was a place of encounter and reflection.

Thus, Alberto Núñez Feijóo reflected on the need to continue promoting alternative routes to reduce the pressure on the main itinerary. Meanwhile, Monsignor Julián Barrio highlighted the spiritual part of the Camino and, in spite of the happiness with the increase in the arrival of pilgrims, he stressed that the original meaning of pilgrimage not be lost. He pointed out: "Whoever goes more quickly does not arrive earlier, but rather the one who knows where he goes."