Getting to know all of the Caminos de Santiago: today, 5 little-known alternatives 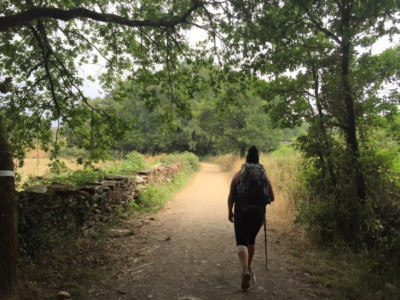 It is said that every pilgrim is a Camino, and this phrase makes sense if we consider that the experiences lived along the Camino make it unique for each pilgrim. But if we wanted to know all the Caminos de Santiago that existed, how many would that be? To be honest, many.

The different Caminos de Santiago have been opening up throughout the centuries to take pilgrims to Compostela from all of the cities of Spain and much of Europe, so it is not surprising that there are many other options besides the more popular ones, or even officially recognized ones. Today we want to talk about these Caminos, which is why we have elected five alternative and seldom-travelled options to prepare for your next Camino. Are you ready? Then let's begin;)

When news of the discovery of the remains of the Apostle Santiago spread in Galicia, many Christians who lived in the Arab kingdoms in the southern peninsula began to travel this Camino to later link to the Vía de la Plata and then reach Compostela. These Christians were given the name Mozarabic, which explains the origin of this Camino name.

The marked itinerary followed the route of the same communication routes that had been already established in Roman times, therefore its antiquity is notorious. Regardless of this, today the Mozarabic Way presents several alternatives according to the places where you wish to start, since what you want to do is consolidate several Caminos that, searching for Santiago, depart from the Eastern provinces of Andalusia.

Thus, cities like Jaén, Almería, Málaga or Granada are united in a single path that ends up converging in Cordoba, to then join the Vía de la Plata in the city of Mérida.

There is an interesting situation about this Camino, and while Madrid is the Autonomous Community that most Spanish pilgrims have travelled to in at least the last decade, very few begin their pilgrimage in this city, which, based on tradition, would be the most logical option. This may be for several reasons, but the reality is that most pilgrims are unaware of the existence of this Camino, therefore it is not even considered when the time comes to begin a pilgrimage.

The Camino de Madrid begins at the Church of Santiago, from which there are a total of 12 stages and more than 320 km to reach Sahagún, where you will join the Camino Francés to reach Compostela. The route is very attractive both for its monumentality (crossing Segovia is a necessary stop to visit the aqueduct) and for its towns, its gastronomy and the fact that crossing the elevated Navacerrada mountain range provides an unforgettable landscape.

Despite what many believe, not all of the Caminos de Santiago arose from pilgrimage, and the Wool Route is proof of this. The origin of this Camino is purely commercial and goes back to the sixteenth century, when Burgos was the wool capital.

At that time, La Mancha shearers and farmers used this route to get there, so the popularity of this Camino was evident even before becoming a pilgrimage route to Compostela.

The first referenced pilgrimage was not made until the beginning of the seventeenth century, when in 1624 three pilgrims set out from Monteagudo de las Salinas on the way to Compostela to fulfil a promise they had made. Regardless of this, today Alicante is considered the official start of this Camino.

The route is perfectly signposted along the way and has a good infrastructure to accommodate pilgrims, therefore it is not difficult to enjoy your pilgrimage via this 27-step route that runs 670 km until linking Burgos to the Camino Francés.

Like the Wool Route, the South-eastern Camino begins its journey in the city of Alicante, but instead of heading towards Burgos, this route traces more markedly towards the northwest, travelling more than 1000 km and crossing more than 350 towns until reaching Benavente, where it joins the Camino Sanabrés.

Its path takes you through the provinces of Albacete, Cuenca, Toledo, Madrid, Ávila, Valladolid and Zamora, offering one of the longest routes among the entire Caminos de Santiago. The origin of this Camino, like many others, dates back to the Roman period, but its first documentation can be found mid-sixteenth century in a publication called "Repertory of all Spanish roads (never before seen)" made by the Valencian Juan Villuga in 1546. Thus, we can see how despite not having the popularity of many other Caminos, the Southeastern Camino offers an attractive option steeped in history.

When we talk about the Camino de Santiago, Catalonia seems to have remained on the margins of the Jacobean movement over the centuries, since it has never had a massive pilgrimage route running through its territory, but the reality is quite different.

The fact that the Camino Francés entered Navarra was not a Catalonian decision, but rather due to a series of situations that were married to make this situation so: the first and clearest was that Catalonia did not reconquer and consolidate its territories until the twelfth century, which means that during the first three centuries of pilgrimage the entire area was far less secure for travel than the Kingdom of Navarra, which was already settled as a more protected option for pilgrims on their journey to Compostela.

Add to this other factors, such as less infrastructure development for pilgrims in comparison to other territories, including Navarra, Aragon or Castile and Leon, or the fact that it had fewer sacred sites with important relics than other cities and towns along the Camino.

But all of this is in the past, and today the Camino Catalán is open to pilgrims looking for an alternative and less travelled option to begin their Camino. Your route begins in Monserrat (although there are options to begin in Barcelona) and consists of 14 stages that cover a total of 356 km until reaching Santa Cilia de Jaca, where it joins the Camino Francés in its branch through Aragon.