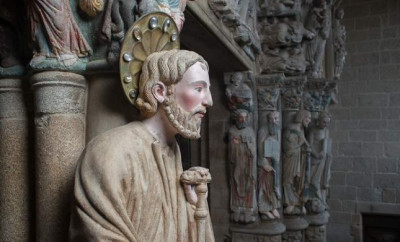 2027. This is the date on which thousands of pilgrims will return to the Camino de Santiago to celebrate a very special event: the next Holy Year of Compostela.

But what is the Holy Year? Are Holy Year and Xacobeo the same thing? When is it celebrated? And, above all, what does it mean that a year is a Holy Year? Today we tell you the origin of this celebration, how often it takes place and what the pilgrim should do after his Camino de Santiago arrives in Compostela in Holy Year. 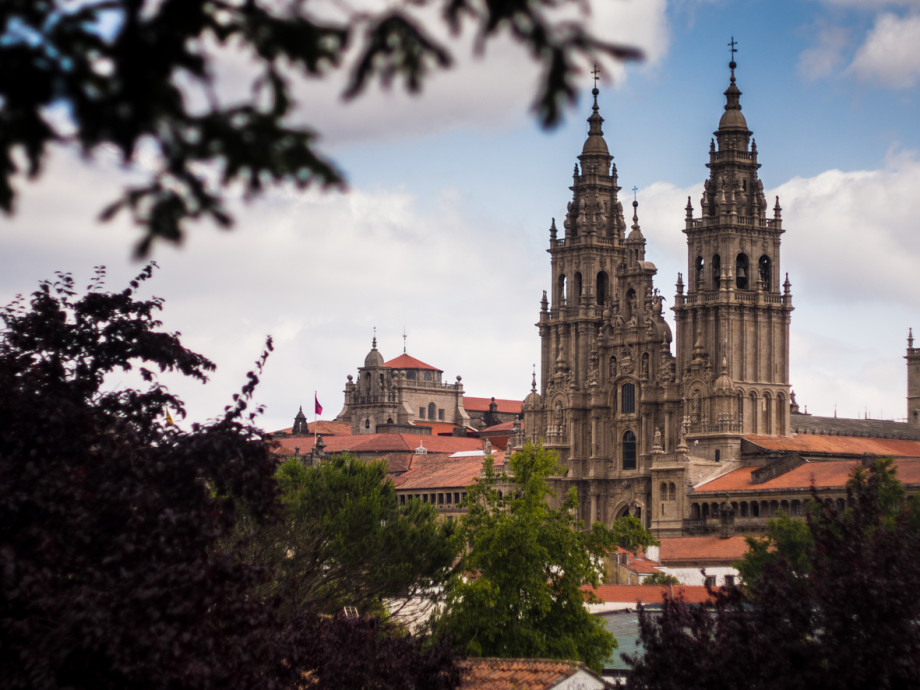 Cathedral of Santiago de Compostela as seen from the Alameda

The first Compostelan Holy Year was established by Pope Callistus II in 1122 through the papal bull called Omnipotentis Dispositione. Coinciding with the laying of the last stone of the Cathedral of Santiago, Calixtus II granted it the privilege of celebrating the Jubilee Holy Year from 1126 onwards, provided that the feast of St. James fell on a Sunday. From then on, the same graces could be obtained in Compostela as were granted in Rome during the Jubilee Years.

Since then, we celebrate the Holy Year, also known as Jubilee Holy Year, Compostela Holy Year or Jacobean Holy Year (Ano Santo Xacobeo in Galician), when the 25th of July falls on a Sunday. In the last two centuries, this coincidence occurred following a cadence of 6, 5, 6 and 11 years, so that in each century a total of 14 Holy Years were celebrated. There is one exception to this rule: when the last year of a century is not a leap year. In this case, it can take 7 or 12 years for the Apostle's Day to fall on a Sunday again and thus become a Holy Year.

Following this temporal cadence, 2027 will be the next Holy Year. After 11 years of waiting, the 120th Compostela Holy Year in its history will be remembered for being double. The pandemic caused by covid-19 led to the double celebration of a Xacobeo 21-22 that will be remembered as the recovery of the Camino de Santiago and as one of the largest influx of pilgrims to date.

This special circumstance will mean that we will only have to wait 5 years to celebrate a new Holy Year in 2027. However, people who cannot walk the Camino de Santiago during that year or cannot travel to Compostela, should not worry because we have several Holy Years in a row: after 2027 it will be celebrated again in 2032 and in 2038.

What does it mean for a Year to be a Holy Year? When a Holy Year is celebrated, the Catholic Church has the power to grant a plenary indulgence, i.e. the forgiveness of all sins, to those faithful who meet three requirements:

It is also recommended to attend Holy Mass during the visit to Santiago Cathedral.

This event is the reason why pilgrims from all over the world come to the tomb of the Apostle in the Holy Year. In addition to the experience that the Camino itself provides, at the end of the journey they are rewarded with the "cleansing" of their souls. 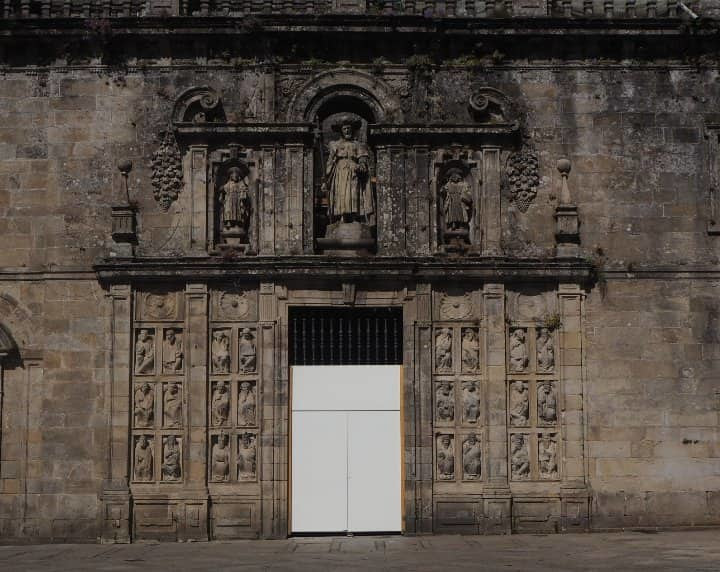 Holy Door of the Cathedral of Santiago, located on the façade facing the Quintana

The Compostela Holy Year has its own rites. The best known is the opening of the Holy Door, the moment when the Jubilee Year officially begins. This event takes place on the afternoon of 31 December, when the archbishop of Santiago proceeds to open this door located at the back of Santiago Cathedral, leading to the Plaza de la Quintana.

With a silver hammer, the archbishop strikes three times on the wall that walls the Holy Door as a symbol of the hardness of the Way that leads there. After this ritual, he asks the Apostle for permission to enter and then the wall is knocked down. The Holy Door thus remains open for the following 12 months and, according to tradition, all pilgrims arriving in Santiago that year must use this door to enter the Cathedral. After the restoration of the Cathedral, the symbolic ritual of the wall has been removed to avoid damaging the artistic heritage of the temple.

Access to the Puerta Santa is from the Plaza de la Quintana. First you have to cross the Baroque curtain built in the 17th century, for which some figures were rescued from the stone choir made by Maestro Mateo and which for years occupied the central nave of the Cathedral.

After crossing a corridor, the pilgrim arrives at the current Holy Door which, in non-jubilee years, is closed and covered by two bronze leaves made by the Compostelan sculptor Suso León. Pilgrims should be aware, however, that it is quite possible that the door used today to access the temple is not the original one.

It was supposed to face east and symbolised the end of the pilgrimage and the redemptive entry into a new life. But after various remodellings of the Cathedral and the construction of the Chapel of San Salvador, it was possible to shift it by a few degrees. 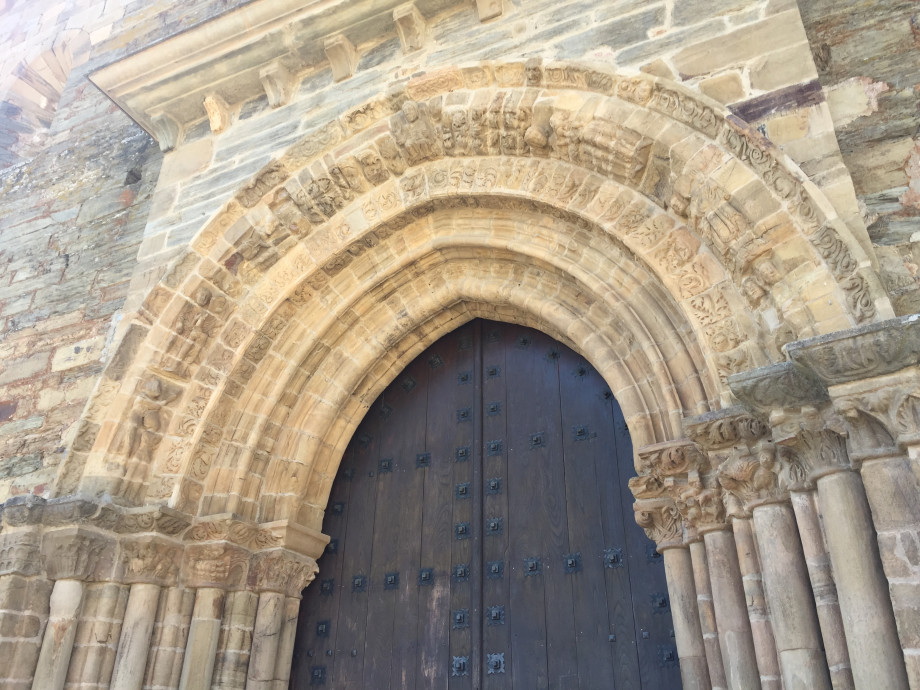 Although Santiago de Compostela is the goal of the Camino, in Holy Year there is an exception. Those pilgrims who cannot reach Santiago during the Holy Year due to physical or health problems can obtain the plenary indulgence in Villafranca del Bierzo.

Located in the heart of the French Way, this town of great Jacobean tradition has since the seventeenth century the power to grant pardon to those pilgrims who cross the Puerta del Perdón of the Church of Santiago, which only opens in Holy Years.

However, on certain conditions: the pilgrim must prove that he or she has travelled at least 100 kilometres and that it is impossible to continue the Camino to Santiago.

* The photograph illustrating this blog entry is the figure of the Apostle St. James presiding over the Pórtico de la Gloria of the Cathedral. © Barrié Foundation/Cathedral Foundation 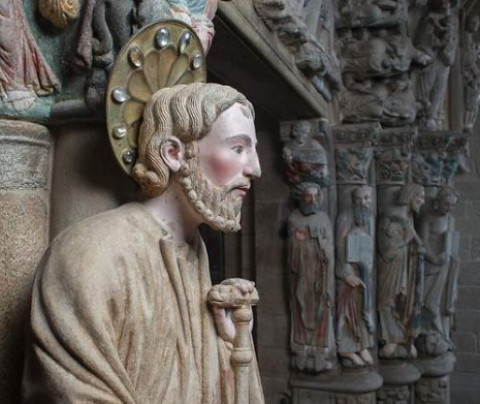 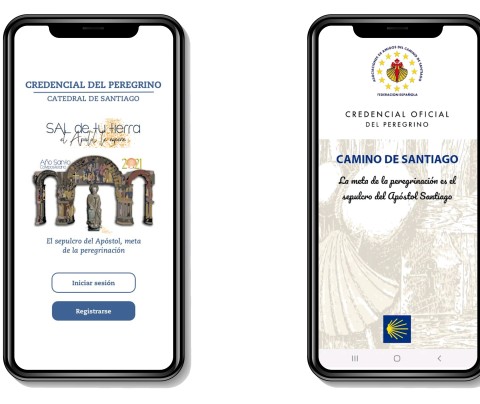