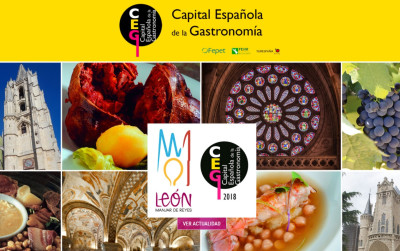 León will be a mandatory stop in 2108 on our Camino de Santiago. Famous for its cecina, blood sausage and Barrio Húmedo, León has just become the Spanish Capital of Gastronomy for 2018. We're using this distinction to walk you through one of the essential stops of the Camino Francés and recommend some of the star products of its pantry. As they say: León, a Feast Fit for Kings.

On your way through León, the pilgrim can enjoy some of the most spectacular monuments in Spain. The Cathedral and its beautiful stained-glass windows, the frescoes of the Collegiate Church of San Isidro--known as the Romanesque Sistine Chapel--, or the plateresque facade of the Hospital of San Marcos do not go unnoticed by anyone visiting this city. But if there is something that truly defines León is its tapas though the Barrio Húmedo or the Romantic Quarter.

The cecina, a Guinness Record

Throughout 2018, León will have the opportunity to demonstrate its culinary excellence. With 16 figures of quality, three Protected Designations of Origin, new protected Geographic Indications, three Trademark Guarantees and a Collective Trademark, León has programmed a total of 160 activities--one every two days--among which is a Guinness Record: the biggest cecina, a vermouth route, and Michelin starred chefs.

As Spanish Capital of Gastornomy for 2018, León will dedicate each month to a dish or typical product of the province. From the botillo and lemonade, to the lechazo and pony meat, cecina, cheese, beer, wine from Bierzo and blood sausage. With it, more than 350 bars and restaurants in León adhering to this initiative will have to make a dish or tapa according to the motto León tastes good, tastes divine. The initiative starts this February with León’s chorizo being featured.

A Feast Fit for Kings, a special Correos stamp

Cheese from Valdeón, cecina from León, roasted peppers from Bierzo, beans from Bañeza, chocolate and shortbread from Astorga are the six products that Correos has chosen to honour the gastronomy of León. In addition to the celebration of León as Spanish Capital of Gastronomy, Correos presnted a special stamp in Fitur that features an illustration of the famous rosette of the Cathedral, highlighting some of the most significant flavours of León's pantry.

The stamp, which belongs to the Spanish Capital of Gastronomy series, has a circulation of 200,000 units and reproduces the logo created for the occasion under the motto, a Feast Fit for Kings.

What to eat in León

León is a land of sausages, meats and even fish, vegetables, exquisite cheeses and exceptional sweets. From the Camino con Correos we also want to join this tribute to the gastronomy of León, recommending ten dishes that you can't miss when passing through León.

We hope that all these recommendations are helpful. And remember that when passing through León, leaving with a full stomach is a must. Safe travels!