Kumano Way and Way of Saint James, a journey from the Rising Sun to the Setting Sun 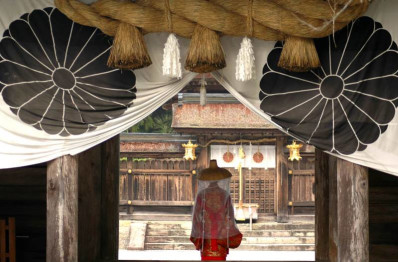 They share a common history of faith, a rich tradition of pilgrimage and routes with an important historical, cultural and spiritual heritage. They are the Way of Saint James and the Kumano Way, the only two roads declared World Heritage by Unesco.

Although Kumano is located in the far east of Asia and Santiago de Compostela is located in the far west of Europe, both have been walked by millions of pilgrims through the time. Therefore, since 1998, the Kumano Way and the Way of Saint James are twinned, giving rise to the Dual Pilgrim, an initiative that recognizes with a stamp the people who travel both ways.

Today in our blog we tell you a little more about the Kumano Way and its relationship with the Way of Saint James. A journey from the Rising Sun to the Setting Sun. From East to West. With a common feeling: to find oneself.

A faith based on nature

With over a thousand years old, the path of Kumano or Kumano Kodo (熊 野 古道) is one of the most well-known pilgrimage roads in Japan. Sacred place since time immemorial, Kumano is a remote mountainous region located south of Kyoto and Osaka on the Kii peninsula, characterized by an impressive natural environment. Large trees, impressive waterfalls and dense vegetation turned this region into the abode of the gods.

In the oldest texts of Japanese history, Kumano appears as the mythical Land of the Yomi, the dead. It was believed that the ancestral spirits ascended the impenetrable mountains that extend to the sea. The advent of Buddhism in the sixth century involved a fusion of beliefs and rites, giving rise to a rich and complex spiritual matrix, an earthly paradise of purification, healing and salvation.

Like the pilgrimage to Santiago de Compostela, the Kumano has different routes. To date, four are the most popular: Nakahechi (Imperial Route), Kohechi (Mountain Route), Ohechi (Coastal Route) and Iseji (Eastern Route).

The most popular route is the Nakahechi Way, it was used by the imperial family for its pilgrimage since the tenth century. The Nakahechi route extends for 38 killometers to the Kumanu Hongu Taisha shrine, the heart of the Kumano Kodo pilgrimage route.

On the other hand, Kohechi's is one of the hardest. Its 70 kilometers cross the Kii peninsula from north to south, linking the Buddhist temple complexes of Koyasan and Kumano Sanzan. This mountainous route is characterized by very steep trails that cross three steps of more than 1,000 meters in height.

The coastal route or Ohechi has attracted the attention of numerous writers and artists thanks to its beautiful landscapes and its breathtaking panoramic views over the Pacific Ocean. The route runs from Tanabe to the south along the coast until reaching the Fuidarakusan-ji time.

Bamboo forests, rice fields and beaches. These are the elements that characterize the Iseji route, which runs along the east coast of the Kii peninsula, between the Ise-jingu shrine and the Kumano Sanzan. Its popularity increased considerably during the Edo period (1603-1868) with the growth of the number of pilgrims to the Ise-jingu Shrine.

Devotees of all social strata, from imperial ancestors to samurai warriors and people of the common people, have traveled these roads seeking contact with the forces of that sacred and universal place. Because, as with the Camino de Santiago, the pilgrimage routes of Kumano are not only a way to reach the different sanctuaries, but they are a spiritual experience in itself.

A spiritual origin and a network of roads consolidated in the tenth century are not the only points in common of the Camino de Santiago and the Kumano Way. Like the scallop shell or yellow arrows are a symbol of the Camino de Santiago, the Kumano has its own distinctive: the Yatagarasu. It is a three-legged crow whose appearance is associated with divine intervention in human affairs.

Tradition has associated the figure of the pilgrim of both Ways with certain clothes used in medieval times. The staff, the bonnet and the hat adorned with a scallop shell is replaced in the Kumano by sumptuous kimonos, used by the Japanese made and the nobles of the Heian dynasty (794-1192). Of all highlights the female kimono, much looser than the traditional and touched a huge hat that hangs a transparent veil that envelops the pilgrim. On November 3, during the Kumano Kodo Parade, which reconstructs the imperial pilgrimage procession, participants can be seen wearing the traditional kimono of the pilgrims.

The idea of ​​purification is, of course, present in both pilgrimages. In front of the ritual of the botafumeiro in the Cathedral of Santiago, in the Kumano Way rituals were frequent in the rivers. In them, the so-called misogi were performed, purifying and symbolic baths for the well-being of the soul.

The Kumano Kodo was declared in 2004 a World Heritage Site by UNESCO under the complex "holy places and pilgrimage routes of the Kii Mountains". A distinction that only has another route of pilgrimage: the Camino de Santiago. All these points in common have led to the twinning of both routes in 2018 through the Dual Pilgrim initiative, which aims to celebrate, recognize and share the stories of those who have completed both routes. two main symbols of both routes: the scallop shell and the Yatagasaru, in addition, there is a Dual Pilgrim credential, in which to collect stamps of the places that cross both routes.

Comments
Raquel Nakayama
I just experienced my Camino de Santiago this April 2018 , with a dual pilgrim passport. I look forward to doing my Camino de Kumano.