When the Way ends in Fisterra 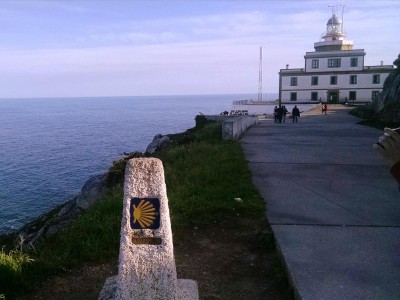 According to legend, the disciples who accompanied the body of Santiago travelled to Dugium, today Fisterra, to ask the Roman authorities for permission to bury the Apostle in the designated place, which centuries later will be known as Santiago de Compostela.

Thus the Way to Fisterra was born, a continuation of the increasingly popular route amongst pilgrims who, upon arriving to Compostela, decide to follow the Camino during the other 4 stages to Finisterre in order to reach the magical places along the Costa da Morte and throughout Galicia. If you're thinking of arriving there to see 'the end of the world' with your own eyes, here are a few suggestions of things to do and what to see when you arrive.

1. Pose at Kilometre 0 and watch the sunset at the lighthouse

The pilgrim rites are mainly concentrated in Cabo Fisterra, at some 3 kilometres from the village, where you'll find the Lighthouse. Built in 1893, it is the most westerly lighthouse in Europe, the closest to America, and from which you can experience fantastic views of the Ocean and the entire Corcubión Estuary.

Around the Lighthouse you'll find the famous Kilometre Zero landmark. The image of this last milestone on the Camino has become a long-standing tradition. But it's not the only one: the pilgrim boot sculpture that you'll see in the rocks is one of the main sources of motivation for those arriving here.

After the rigorous pictures, take time to enjoy yourself and relax. And there's nothing like watch a sunset from the lighthouse. To see the sun set over the ocean in this magical place is an experience that the Camino offers. At sunset, on the rocks, pilgrims and visitors gather there to watch the sun disappear.

For many years this was the place where the sun was extinguished every night, the "Finis Terrae". If you want to watch it from the shore, you can also go to the beach at Mar de Fóra, right next to the lighthouse, or from one of the nearby beaches, like O Rostro. From almost any spot, if you have good weather, you'll be able to enjoy the beauty of the sunset on this legendary coast.

2. Swim in the Langosteira beach 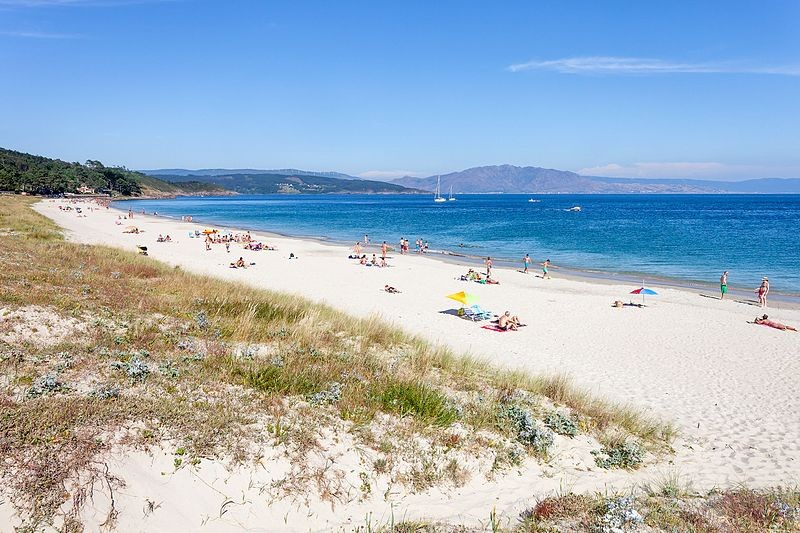 Another pilgrim rite includes swimming at the Langosteira beach, two kilometres before reaching the village of Fisterra, as a means of purification (literally and symbolically) before arriving to the end of the Camino. Today many pilgrims continue this custom. Of course, no one would mind a bath after a day of hiking...even if the temperature of the Atlantic may take you aback!

Do you know that the Way to Fisterra also has its own certificate? It's known as the Fisterrana and it is equivalent to the Compostela obtained when completing the Camino to Santiago. You can get one at the Fisterra Pilgrims Hostel, justifying your Camino with seals on the same Credential used for Santiago. If you dare to follow the route to Muxía from Fisterra up to the Sanctuary of the 'Virxe da Barca' (Virgin of the Boat), you can also obtain the 'Muxiana' and go home with three pilgrimage certificate. No big deal! ;-)

4. Visit the Fisterra fish market and pay homage with seafood

Fisterra is a traditional fishing village. And this can be noted on its streets, in its architecture and in everyday life...but especially in the port area. 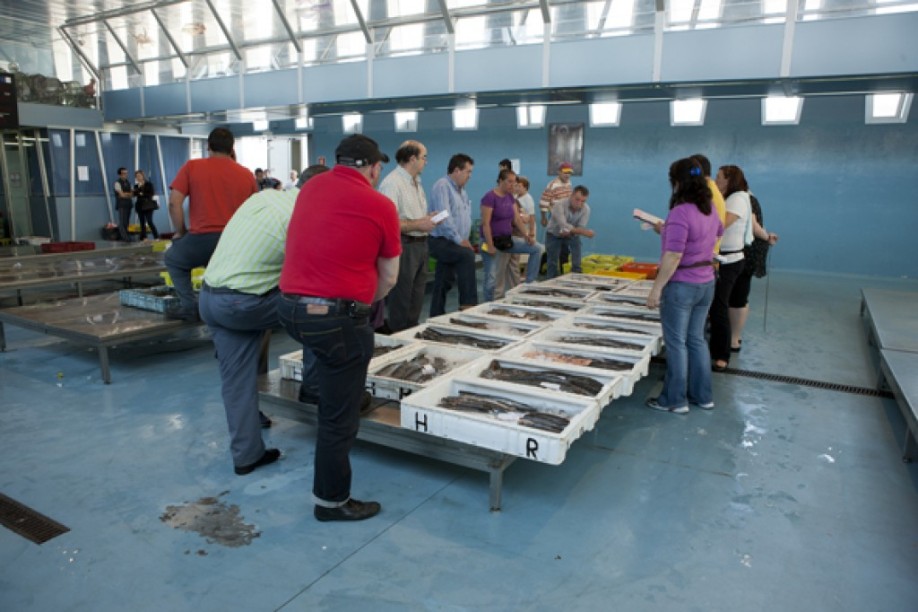 A visit to the fish market is a must and a treat for the senses: there you'll be able to see the best seafood bestowed upon us by the rough waters of the Costa da Morte. Here, seafood is king of the kitchen, so don't pass the chance to pay tribute. We especially recommend the navajas (which here are known as 'longueiróns'), and to which a gastronomic festival is dedicated in August.

5. Stroll through the village of Fisterra and visit a monument

Fisterra is a small village, but it boasts rich heritage, artistic, ethnographic and natural, which can be seen just taking a short walk. The Castle of San Carlos (from the eighteenth century), the chapel of Nosa Señora do Bo Suceso, the ´Casa do Cuadrante´(which was the pilgrim hostel at the time), the ´Casa do Porto´, the church of Santa María das Areas or the numerous 'cruceiros' (stone crosses) in the area. The streets of Fisterra hold many surprises for those keeping their eyes open!

6. Things you SHOULD NOT do

In addition to our recommendations, we also want to point out some things that you shouldn't do when arriving to Finisterre, so that together we can help to preserve this magical place. 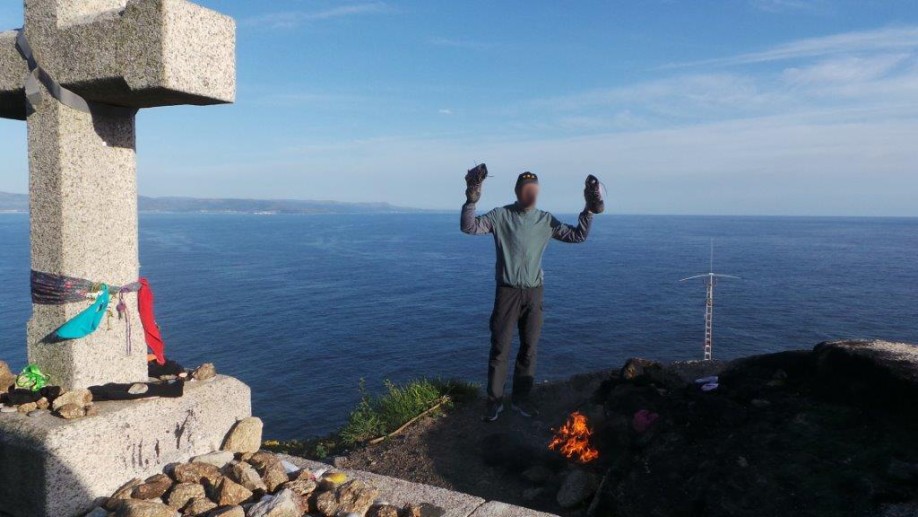 This practice may be a reproduction of the medieval ritual of burning clothing on the Cruz dos Farrapos ('Rags Cross'), now situated on the roofs of the Cathedral de Santiago. The origins of this false ritual do not concern us as much as the fact that it continues.

The Fisterra Town Council itself takes time trying to educate pilgrims about why it is inadvisable to continue this supposed rite and have even placed several signs noting its prohibition. Burning clothing there alters and dirties the environment and can also pose a significant fire risk, since the winds in this area are very strong and changing, and even if you think nothing will happen, sometimes the unexpected occurs. Case in point: just two weks ago two pilgrims burning boots caused a fire in the cape.

We're sure that they're destroyed and may smell. But the "tradition" of leaving your boots and other items of clothing that you've taken on the Camino is almost as bad as burning it. We hope you'll be someone who takes care of your surroundings and not follow this bad example!

If you've travelled the Camino to Fisterra, tell us what you liked the most or if you discovered a special place. If you haven't yet arrived, we hope that this short guide helps you to enjoy the last steps of your Camino de Santiago.

Remember that if you need our help along on the Camino, we can take your backpack stage by stage to the End of the World and in Fisterra we have an official post office where you can send your bike o your suitcase back home.