Aleksandar Petrovic finishes the Camino at the Obradoiro 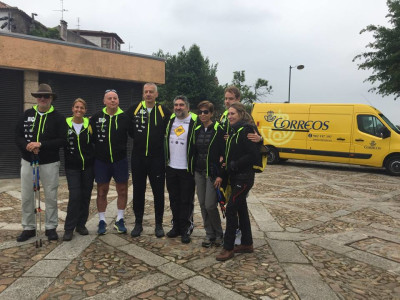 The Camino de Santiago ends at the Obradoiro. And so it was for ex-basketball player and current coach of the Brazilian national team, Aleksandar Petrovic, who for the last five days has travelled the Portuguese Way with the Monbus Obradoiro Basketball Club. In this fourth edition of El Camino ends at Obradoiro, the former Croatian basketball player was joined by his son Marko on an expedition in which El Camino con Correos also took part. 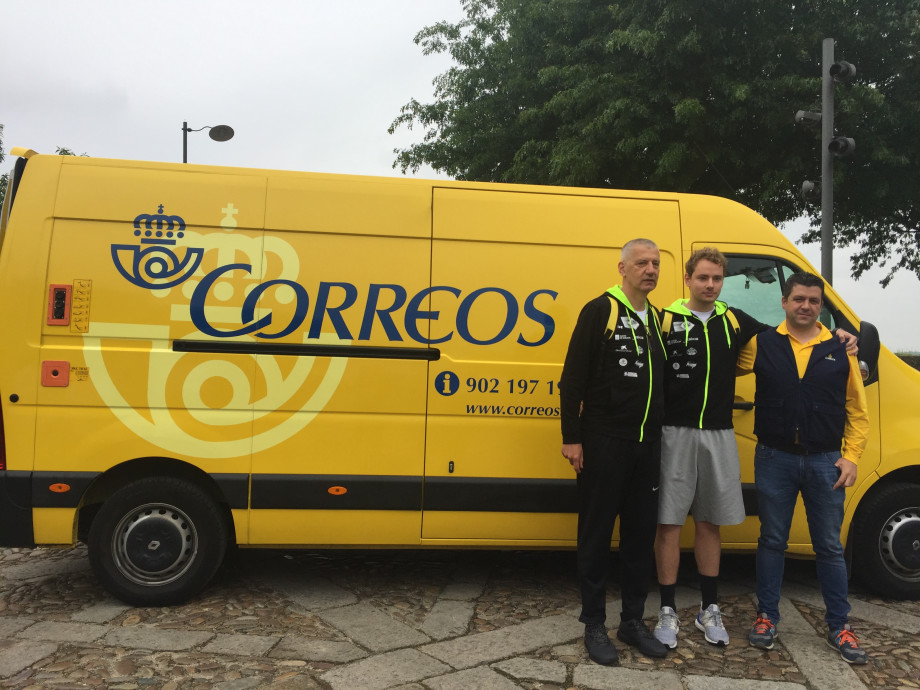 We are proud to say that Correos was a key participant in this Camino, undertaken in a spirit of togetherness, whose aim is to publicise the Jacobean Routes and to help the Heracles Foundation raise the necessary funds for the sporting activities they develop for children and young people.

In addition to  ransporting their luggage from stage to stage with the PaqMochila, this obradoirista expedition, led by Aza Petrovic, stamped its credential in the offices of Redondela, Padrón and Santiago. Today we invite you to travel the Portuguese Way with us, our postmen and women, and with this great figure of the game of basketball.

After travelling the French Way with Terry Porter, the Primitive with Juan Antonio Corbalán and the English with Nikos Galis, the Portuguese Way was the route chosen for the fourth edition of El Camino ends at Obradoiro. Valença do Minho was the chosen starting place on the Route, where Aleksandar Petrovic was accompanied by a very special guest: Juan Antonio Corbalán, who was tasked with delivering the pilgrim's staff to the Croatian.

The meeting between these two basketball greats threw up a very special moment, a symbol of the values of the Camino de Santiago. “I want to start by apologising to Juan Antonio for those times back when we came up against one another. I was young, a 21 year-old kid, and I didn't behave myself well. I want you to know.”

Before presenting him with the staff, Corbalán thanked him for the gesture and encouraged Petrovic to enjoy the experience: “Aza, enjoy the experience as it really is brilliant, and you will come to see the beauty of everything about the Camino. It's wonderful to be able to reconnect with people like you, seeing how our lives have moved on so many years after us having crossed paths." 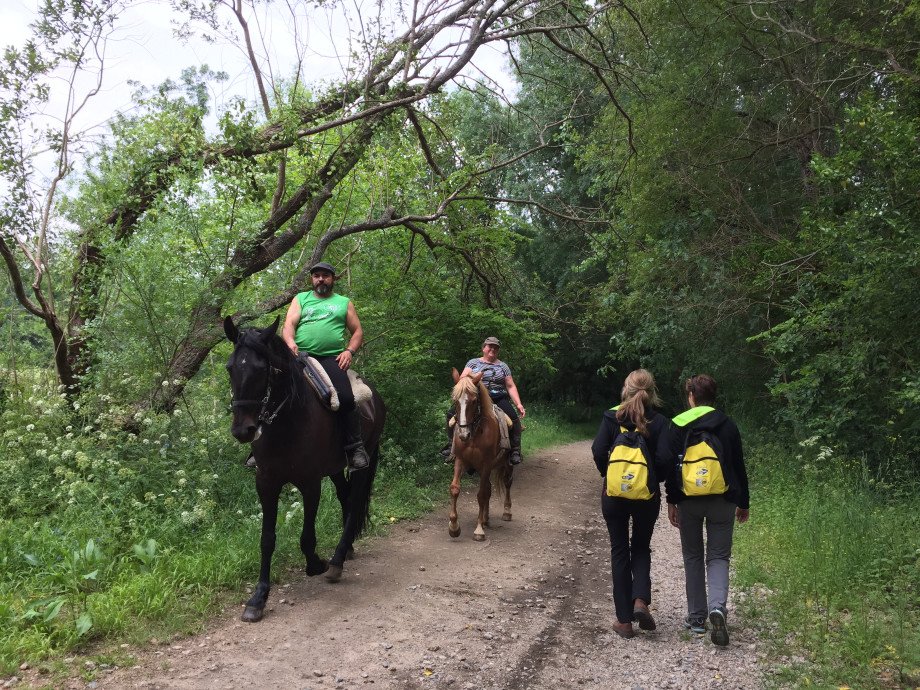 Before starting off, Petrovic delivered his luggage to our postman, who was responsible for transporting it from stage to stage with our PaqMochila. From there the expedition headed for Tui, crossing the international bridge over the Miño.

After touring the medieval streets of Tui and visiting its Cathedral, Aza and Corbalán signed basketballs and shirts for children from the local basketball club. Heading to O Porriño, the group crossed beautiful landscapes through the Gándaras de Budiño national park, reaching the town of Pontevedra via the alternative route that runs parallel to the Louro River. You can view a video-summary here of this first stage.

Moving, fun... And tough. This was the second stage of our Portuguese Way, in which we made up the 30 kilometres that separate O Porriño from Pontevedra. The highlight of the day was the reunion between Petrovic, Benito Doblado and Raúl Pérez, former players of the Caja San Fernando de Sevilla team that he trained with during his time in the Endesa League.

After leaving O Porriño early, the first stop was in Redondela. There they visited the post office to stamp the Credential with the bespoke postmark of the Portuguese Way that Correos has made available for pilgrims. In addition, Aza and Marco took the opportunity to send a postcard from Galicia to his daughter in Croatia, to congratulate her for her upcoming wedding.

Those on the expedition were impressed by the views of the Vigo estuary as they crossed Arcade, Pontesampaio or Vilaboa before reaching the church of the Pilgrim in Pontevedra. You can see the day here.

Obradoiro coach Moncho Fernández was our Camino partner during the third stage between Pontevedra and Caldas de Reis. As with every day, the day began early with the expedition's luggage being collected.

After crossing the Burgo Bridge over the Lérez River, the stage had few slopes but its accessible asphalt and dirt tracks always made for comfortable trekking.

The goal was Caldas de Reis, a town built upon thermals, that we entered via Calle Real and its Roman bridge that crosses over the Umia River. Before finishing the stage, Aza Petrovic walked up to the Burgas public fountain with the rest of the group to taste the thermal waters that have made the town of Pontevedra famous. See our video diary of the day here. 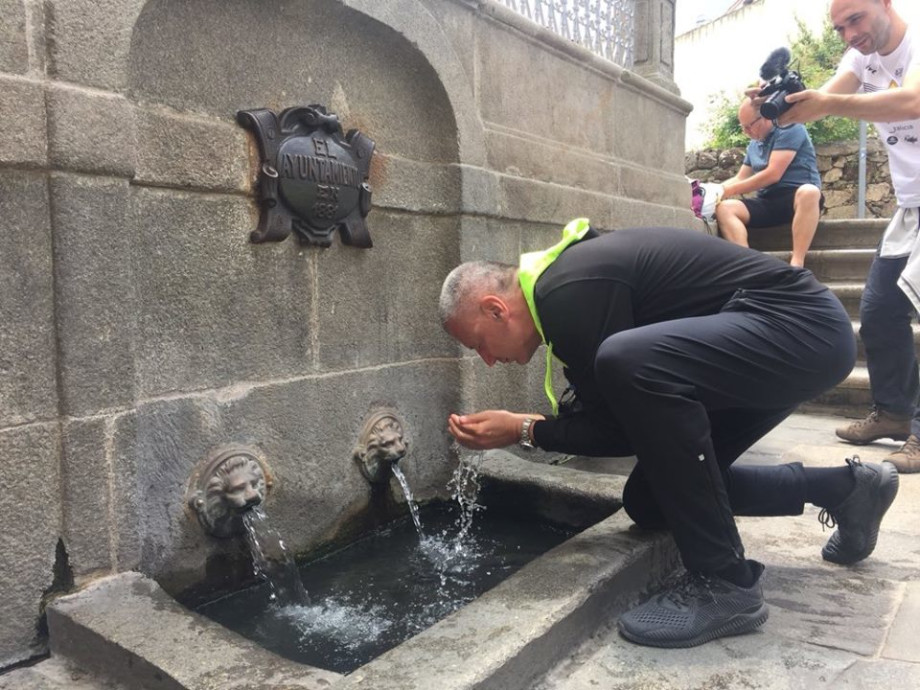 The source of As Burgas was also the starting point of the fourth stage in which assistant coaches Gonzalo R. Palmeiro and Víctor Pérez joined up, along with Monbus Obradoiro team captain Pepe Pozas. The Galician countryside played a starring role on this stage, evidently being one of the most moving aspects of the Portuguese Way.

The bagpipes group 'O Pedrón' performed at the Espolón de Padrón, the march of the Old Kingdom of Galicia, much to the delight of Aza and his son, who were also able to visit the famous Pedrón, a Jacobean symbol to which, according to legend, the disciples tied the stone boat that carried the body of the Apostle Santiago.

To make their arrival more official, two fans turned up wearing Cibona and Sibeni basketball shirts emblazoned with Drazen Petrovic’s name. You can view some of the images here.

At long last, the final stage! The Plaza del Obradoiro and the Cathedral were waiting for us at the end of the almost 23 kilometre journey that separates Padrón from Santiago de Compostela.

The rain made an appearance at the end of the Camino, highlighting the beauty of the landscape even more en route to Milladoiro. Petrovic was received there by Juan José Miñones, the mayor of Ames, and Correos Zone 1 director Ángel Pérez, who would join the delegation heading up to the Cathedral itself.

Some of the Obradoiro team’s fan base joined them before the church of Santa María de Conxo, along with Moncho Fernández and Pepe Pozas, who did not want to miss the excitement of reaching the Obradoiro all together. Just 100 metres from the Cathedral, Aza Petrovic and Marko made the last stop on the Camino: at the Santiago post office’s storage facility, where they obtained the last stamp for their credential, accrediting their pilgrimage to Santiago. You can view it here. 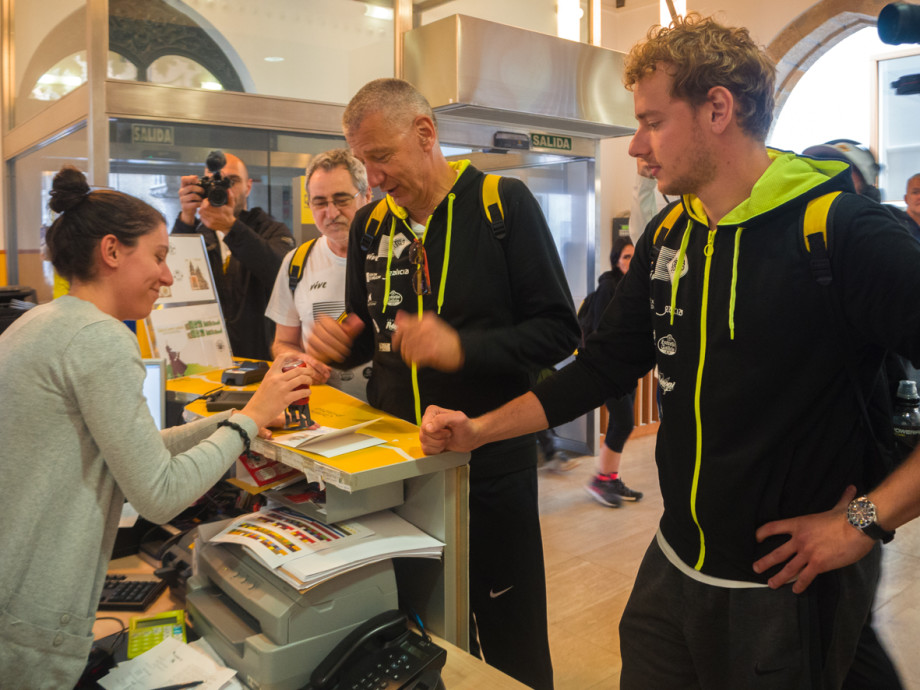 Applause, smiles and an outpouring of emotion were shared by Aza and Marko with their fellow travellers upon reaching the entrance to the square of the Obradoiro, after all the effort they had put in since starting the Portuguese Way last Sunday in Valença, bringing a close to this, the fourth edition of 'The Way ends in Obradoiro.' 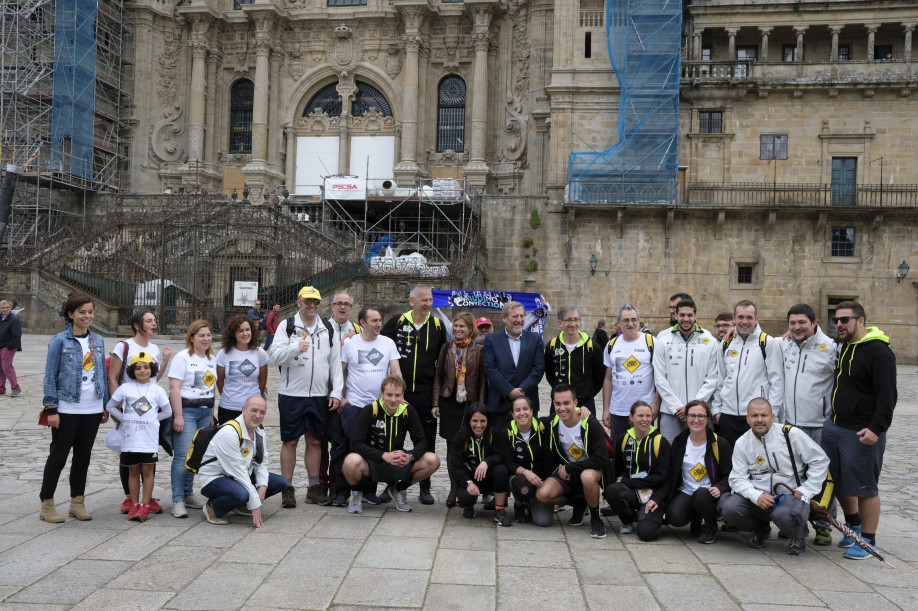