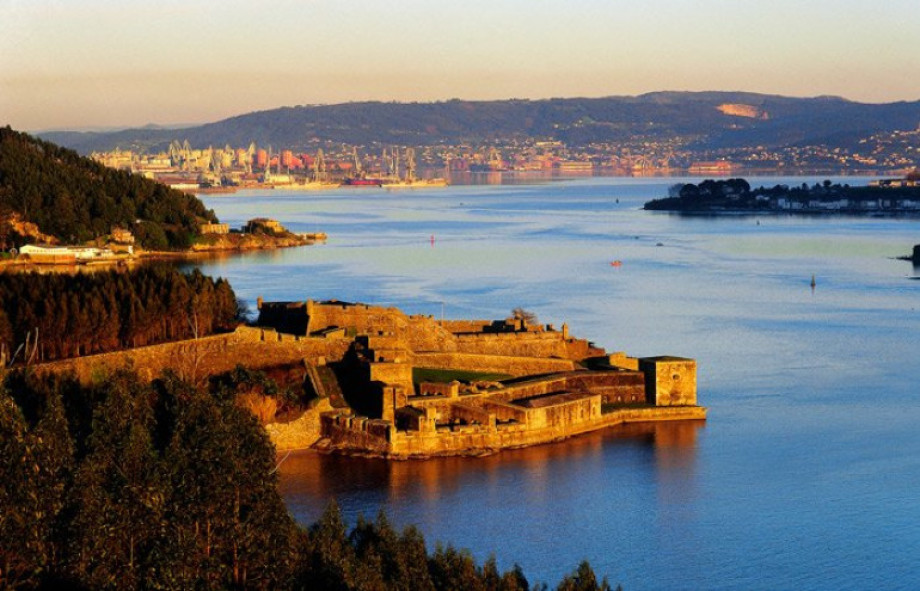 Ferrol is the main starting point chosen by pilgrims that walk the English Way. In the Middle Ages, this Jacobean Route was mostly traveled by pilgrims that disembarked in the main Galician ports of  Ferrol and A Coruña coming from the United Kingdom and other northern european countries.

Nowadays, you can also get to Ferrol by boat, either sailing -as part of the Sail the Way initiative- or on board one of the many cruise ships that arrive in the city. However, if you want to get to Ferrol to start your Camino de Santiago through a more traditional route, today we detail how to get there by train, bus, car or plane.

How to get to Ferrol by train

From Madrid it’s possible to get to Ferrol by train every day of the week. Ferrol has a couple of connections per day through Alvia (between 7 and 9 hours) and by a TrenHotel (overnight service of 12 hours). From other key cities for the Camino de Santiago such as Barcelona, ​​Hendaye or Seville it is also possible to get to Ferrol by train with a single transfer in Madrid.

If you want to get to Ferrol from any city in the north of Spain, you can do it in a FEVE train that runs along the Cantabrian coast, joining Ferrol and Bilbao. Departing from the Concordia station, in the center of Bilbao, the FEVE arrives in Santander, from where you can continue to Ferrol.

Ferrol has direct trains from A Coruña and a transfer to other important cities such as Santiago, Vigo or Ourense.

How to get to Ferrol by bus

If we want to get to Ferrol from anywhere in Galicia we have two options: Monbús and Arriva Noroeste. Monbús offers up to seven daily connections with Santiago de Compostela and five with Vigo. While with Arriva you can travel from A Coruña to Ferrol at almost any time of the day (between 6:00 am and 10:00 pm).

Apart from the Ferrol bus station, located on the Paseo de la Estación, s/n, the pilgrim can get off the bus at the Plazsa de Galicia, in the heart of the city.

How to get to Ferrol by plane

Galicia has three airports: Santiago de Compostela, A Coruña y Vigo. The closest one to Ferrol is the Alvedro airport, in A Coruña, just 52 kilometers away (32 miles). Iberia, Vueling and Air Europa operate from this airport, with connections to Madrid, Sevilla, Barcelona or Bilbao. From the terminal you can take a taxi or the urban bus (line 40519 that connects the airport with the city center). The cost is 1.5 euros with a half hour  frequency (except on Sundays and Holidays that it’s every hour). Once in A Coruña, we would have to choose between taking the bus or the train to get to Ferrol, which takes approximately an hour.

The Santiago de Compostela airport is the one that offers the greatest number of connections. It has daily connections with Madrid, Barcelona, Bilbao, Seville, Malaga or the Canary Islands through Iberia, Vueling and Ryanair. Santiago also receives international flights from London, Frankfurt or Paris. Once at the Lavacolla airport, the pilgrim must take a taxi or a bus that connects the airport with the city center, the bus station and the train station. The price of the trip is 3 euros (5 euros round trip), the frequency is every 30 minutes and the approximate duration of the trip is 40 minutes.

Vigo is another city that can be reached by plane. It offers daily connections to Madrid, Barcelona or Bilbao. From the Peinador airport, the pilgrim will have to take an urban bus (L9A), which will take them to the Plaza Eugenio Fadrique, in the center of Vigo. The ticket costs 1.35 euros and ther's a bus every 30 minutes from Monday to Saturday and Sunday afternoons. Sundays in the morning and holidays, the frequency is every 60 minutes. Once in the center of Vigo you can choose between going to Ferrol by bus or train.

If you prefer, you can also rent a car in any of the three terminals.

How to get to Ferrol by car

Another option to get to Ferrol and enjoy the English Way is to do it by road. For those pilgrims traveling through the north, the best option is to take the A-8, a toll-free road that reaches Vilalba (Lugo) where it links with the AG-64 until Ferrol. This road connects Galicia with France, passing through Asturias, Cantabria and the Basque Country.

From Madrid, the best option is to take the A6 and then connect with the AG-64, which will take us directly to Ferrol. We will hop on the A6 in Madrid if we come from other cities such as Barcelona, Valencia or Zamora if we’re coming from Sevilla (A66 and A6).

In Galicia, the road that connects the entire Atlantic axis Ferrol-A Coruña-Santiago-Pontevedra-Vigo-Tui is the AP9. It is a highway with toll and it will be the one to take if we come from Portugal, whether we take the A-28 or if we drive along the A3, which connects Oporto with Galicia.

We hope that these indications have solved some of your questions about how to get to Ferrol to start the Camino Inglés (English Way). And if in this journey you have problems with your luggage or come bring your bike, remember that Correos helps you with the logistics. With the Paq Bicicleta and the Paq Peregrino you can send your bike or your bags or extra packages from the post office of your place of origin to Ferrol. And when you get to Santiago, send them back. ¡Buen Camino!