Romanesque art on the Camino Frances 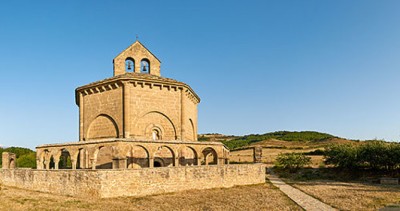 The Camino de Santiago, like every pilgrimage route, carries with it an enormous cultural legacy that has been printed over the centuries by the thousands and thousands of pilgrims who have passed through it.

This coming and going of people not only made it the most important pilgrimage route in the West, but also made it a way of expansion for knowledge, since if we consider that at the time the Camino was born, books were a scarce commodity and the Internet wasn't showing up in the most ridiculous dream of the most disoriented person, the only way that knowledge can geographically expanded, was to charge it in his own head.

Romanesque architecture and art are surely the main example of the Camino as a transport for knowledge: an artistic current born in the area of Lombardy and ends by touching the Galician lands on a journey that crosses the Camino from end to end and lasts little more than two centuries. In its route, it leaves an incredible amount of constructions that still be, nowadays, the magnificence of what was the first international artistic stream of Europe.

Ok, the previous paragraph was just fine as an introduction, but if we wanna fully get into that architecture and Romanesque art left on the Camino de Santiago, we'd better dig a little about this current.

As we said before, the Romanesque is an artistic current developed mainly between the eleventh, twelfth and thirteenth centuries, and it is considered the first international artistic trend of Europe, since it develops almost at the same time in what is now France, Spain, Italy and Germany. It is true that in each of the regions the Romanesque has its own characteristics and individualityes, but is also real that through all of these territories has a coherent and unified language that make us to consider it as a single movement.

The birth of the Romanesque is due to many factors, although the main are the economic growth of the various regions (which allows to build more and better churches), the expansion of certain religious orders, the increasing of the influence of the church (the Romanesque is also the first artistic trend markedly religious) and the pilgrimage, which has on the Camino de Santiago its main example.

Its roots are very deep, and its origins go back to other currents such as Byzantine, Germanic, Roman or Arabic, which gives even more value to this current, since it was the first that coherently joined all these currents, so dissimilar to each other

Examples of Romanesque architecture on the Camino Francés

Ok okay, the art history class was okay for a while, but here we are interested in what happens on the Camino, right? Well... it turns out that the Camino de Santiago is almost an interactive map of the development of the Romanesque as an artistic movement: with the first constructions in the area of Catalonia, the Spanish Romanesque was expanding along the road until arriving, of course, to the Galician Lands. If we add to this the fact that we will only find Romanesque buildings in the north of the peninsula (to the south came later and merged with the Gothic in some cases and with Mudejar art in others) it is more than clear that it was The Camino and its need of churches to receive the pilgrims what made to current this in our lands.

The romanesque in Aragón

With the Cathedral of Jaca as the main exponent of the Aragonese Romanesque (and one of the most imposing of the Spanish Romanesque), this current presents other great works in Alto Aragón as the Monastery of San Juan de la Peña, located in a place of an almost magnetic beauty, and the Church of Santa Cruz de los Seros.

The romanesque in Navarra

The medieval complex that offers the town of Estella is one of the best conserved with which the Navarrese community counts. Monuments like the one of San Pedro de la Rua, Our Lady of Rocamador or the Holy Sepulcher and the Palace of the Kings of Navarre are proof of it. Roncesvalles, Pamplona or Lorca, among others, also count with beautiful and very careful Romanesque remains.

The romanesque in La Rioja

With Nájera as the main bastion of the Riojan Romanesque, where the Monastery of Santa María la Real stands out, we can find exponents of this artistic movement throughout the community, such as the Cathedral of Santo Domingo de la Calzada or the Head of the Church of San Bartolomé, in Logroño.

The romanesque in Castilla y León

If we consider that Castile y Leon is the autonomous community that major section of the Camino de Santiago has, it is not surprising that we will find in its territory multiple exponents of the Romanesque movement. The Monastery of San Juan de Ortega, the Monastery of the Royal Huelgas or the incredible Church of San Martin de Tours in Frómista, are examples of what the pilgrim can be found in Castile and Leon.

The romanesque in Galicia

With the Cathedral of Santiago as Galician Romanesque exponent, the pilgrims will not have to wait to reach the main objective to see what this current left in Galician lands: the Church of Sarria or the one in Portomarín are also great exponents of the Romanesque. Of course, once you arrive in Santiago, do not miss the Collegiate Church of Santa María del Sar, a building of great size and beauty.

We hope this article has liked you and help you to know a little more about the Romanesque architecture on the Camino de Santiago. If you liked it, do not hesitate to share it!