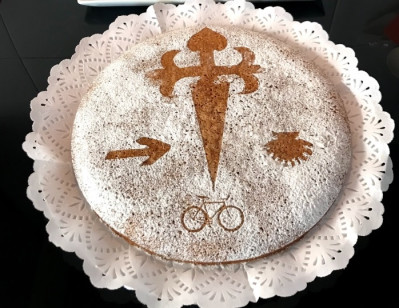 Tortilla, empanada, bacalao, tarta de Santiago…. The Camino de Santiago could be done from plate to plate, from kitchen to kitchen, from flavor to flavor. As great as its cultural or artistic heritage, the Jacobean Routes have an enormous gastronomic wealth that we can enjoy during our pilgrimage.

This week we propose you tackle the Covid-19 from home cooking some of those dishes that automatically transport us to the Camino de Santiago. We start with four simple recipes, which include its origins and its history, in addition to the steps you must follow to feed your soul…. And your body. 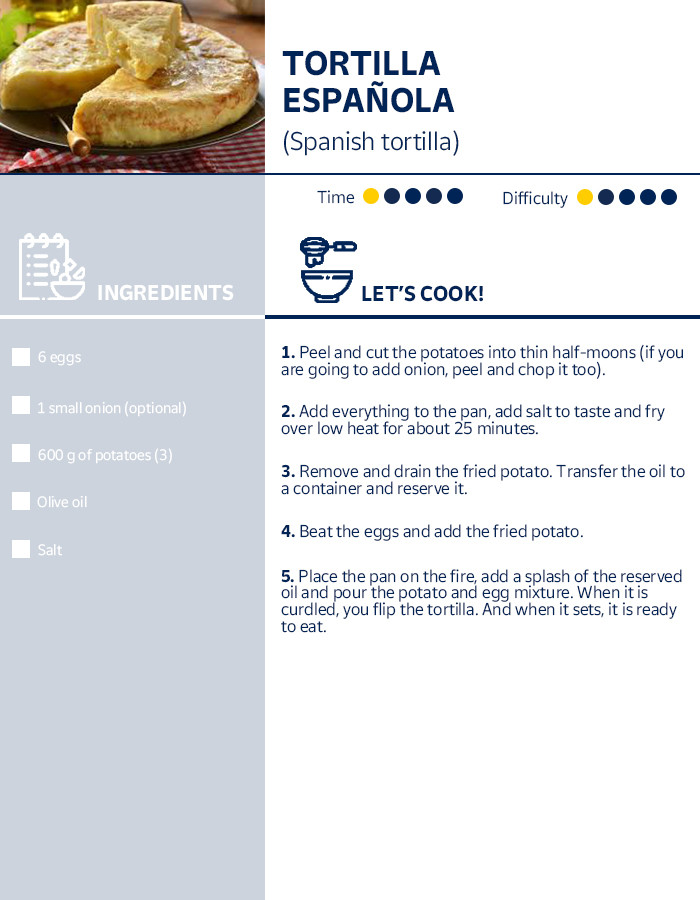 At breakfast, as a mid-morning tapa, for lunch, for a snack or for dinner. The Spanish omelette (tortilla de patata) is one of those dishes that you want at any time. Potatoes, eggs, oil and salt are the basic ingredients of one of the most popular dishes in Spanish cuisine that accepts almost everything as a complement: vegetables, meats, seafood...

Although the potato arrived in Spain after the discovery of America, it would not become a popular food until the 18th century. There we find the first references to the Spanish omelette, a nutritious and cheap dish that served to alleviate the hunger that plagued the country.

There are many ways of making a tortilla. With the egg either well done or undercooked, with onion or without it…. You like it how you like it, if you feel the need to return to the Camino, do not hesitate to fry potatoes, beat eggs and cook it in the pan. Sensory travel guaranteed.

The recipe? It couldn't be easier: 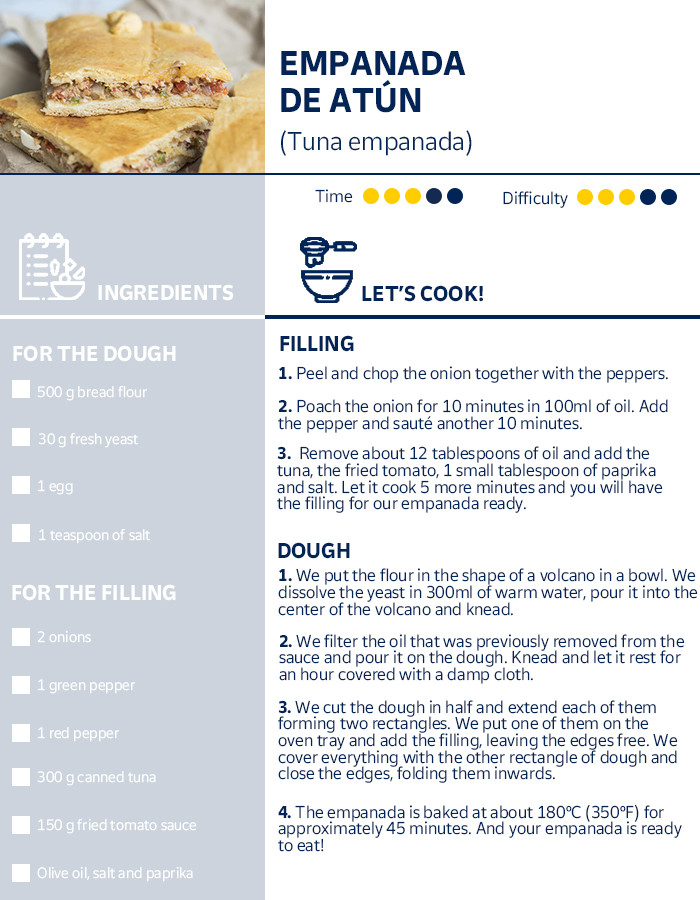 An easy recipe that will automatically take us to the Camino de Santiago is the Empanada gallega. Its ingredients are as simple as they are varied. On one hand, the dough. On the other, whatever you want. The most typical are those made of zorza or raxo (pork), octopus, scallops or tuna. Although there are all kinds: vegetarian (with turnip tops or spinach), chicken, cod with raisins….

But the key to the empanada gallega is in the dough. In many places it is made with puff pastry, although the typical one is made of flour, olive oil, yeast and salt. The filling is accompanied by a sauce made out of onion, which in some cases incorporates green and / or red pepper.

How about we make a tuna empanada? Let's go with the recipe:

Do you dare with the dough? Let's do it!

And your empanada is ready to eat! 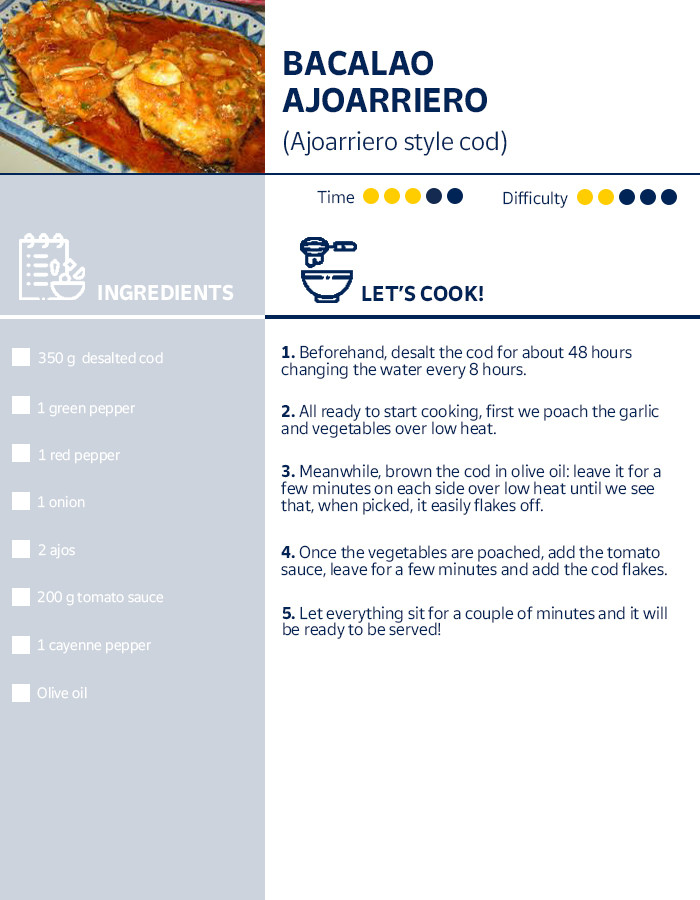 If we had to choose a single fish dish to savor the Camino de Santiago, without a doubt we would pick the bacalao ajoarriero. Typical of Aragon and Navarra, but also of León and some areas of the Basque Country, this simple dish does not have a unique recipe.

The indispensable ingredients are salted cod and a sauce of garlic and paprika. Over time, vegetables have been added to the recipe, which will depend largely on the region, the season and even the cook’s taste. The most typical are: tomato, onion, piquillo peppers and garlic.

Its origin is not very clear, although the most popular theory is that, as its name suggests, we owe this dish to the muleteers, people in charge of transporting goods on the back of animals throughout the Spanish territory, who composed the recipe according to the ingredients they found on their way.

Its elaboration is very simple:

Previous steps: desalt the cod for about 48 hours changing the water every 8 hours. 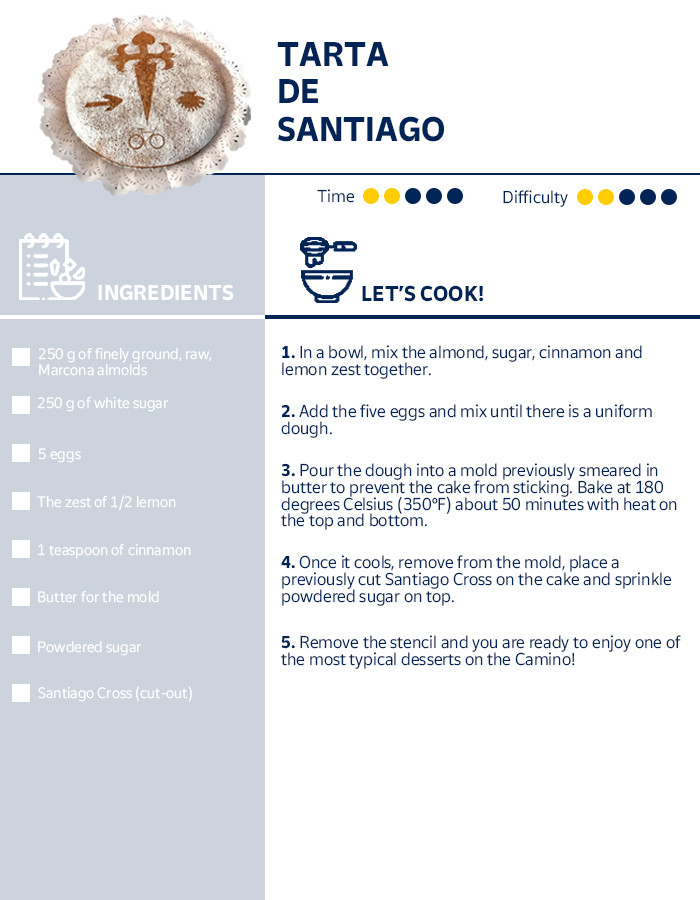 There is no better dessert for the Camino de Santiago. Ground almonds, eggs and sugar make this cake an unforgettable memory for every pilgrim who comes to Santiago. All covered in a cloak of powdered sugar with the unmistakable cross of the Apostle drawn on it.

We know its flavor but what about its origin? The first written documentation was found in 1577, during Pedro de Porto Carrero's visit to the University of Santiago. The records show that he was served Torta Real (Royal Cake), an almond cake made in the same way as the current Tarta de Santiago.

This cake underwent a transformation in 1929, when the Casa Mora Compostela pastry shop (which we can still find today in Rúa do Vilar) decided to decorate the almond cake with a silhouette of the Santiago Cross. Thus, the cake and the Camino de Santiago were forever united until today.

Remove the stencil and you are ready to enjoy one of the most typical desserts on the Camino!

Here ends our Jacobean recipe book for today. We hope we made your mouths water and that you have been transported to the Camino for a few minutes. And, if you want to taste it, put these recipes into practice. If you do, do not hesitate to show us your dishes. And if you miss any dish, we accept suggestions ;-) Enjoy it and Buen Camino!

Comments
Tony Spanglish
What a great way to do the Camino ????thanks very much for the recipies I shall be using them next week Buen Camino
El camino con correos
Thank you Tony. Que aproveche and Buen Camino!