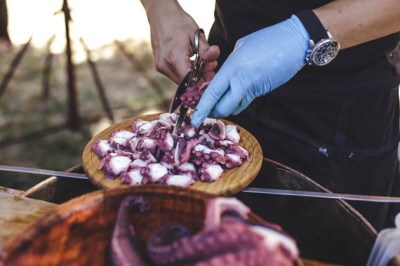 If you're a follower of our Twitter account (and if you're not, you should give us a follow ;D), you've surely come across the concept of #Gastrocamino, which is none other than the gastronomic path that runs parallel to the Camino de Santiago. We'll show you some of the more typical and delicious dishes that you can try in each Autonomous Community that you'll cross along your route to help you out when choosing what to try upon reaching each destination.

The problem was that 140 characters is many times limiting, and to have to go naming dishes from different communities with each tweet was very difficult for pilgrims who arrived at a destination to find the dishes we had pointed out. Thus, the idea for this section was born: none other than #Gastrocamino, only this time in blog version and grouping ten of the main dishes of the Autonomous Communities in a single article.

At first, we weren't sure which Autonomous Community to begin with, so we decided to take the logical route and choose one which all pilgrims must pass: Galicia (logically). Below we'll discuss ten of the most traditional Galician dishes so that upon arrival to the land of gentlemen and legends, you'll know exactly what to try. In reality the name of the dish is octopus á feira, but it is the Galicians who make it so well and have earned the name. The octopus a la gallega recipe is simple, but not so easy: the octopus must be placed in a large pot where it will be cooked to soften the meat. During cooking, you must remove and replace it three or four times to "frighten it", and after cooked, cut it into slices of about one centimetre and serve on a wooden dish sprinkled with paprika, coarse salt and accompanied by "cachelos" (cooked potatoes).

One of the busiest places along the Camino to try this delicacy is Melide. Pilgrims pass there making their way down the Camino Francés with those travelling the Primitive Camino, sitting down to tuck into this dish before arriving at Santiago de Compostela.

Where does the difficulty lie in octopus a la gallega? If you prepare it for a Galician and it doesn't turn out well, he or she will taste it. They'll really taste it :P

A Carnival tradition, filloas are a dessert whose history goes back all the way to the Roman era. The basic recipe consists of only three ingredients, salt, flour and eggs, and although only usually accompanied by sugar, they can also be filled with jams, chocolate, cooked chestnuts, cream, etc.

Filloas not only are a delicious dessert but also serve as a salty companion for cooked dishes. An interesting fact: there is even a recipe for blood filloas!

With so much food going around the table, it will be necessary to pair them with a good wine, right? In that case, albariño is the perfect choice. Dry and with an acidic touch, albariño is the main product of the most popular wine region of Galicia, Rías Baixas, going up through the Camino Portugués. If you're looking for a good white wine, don't hesitate to bring it to the table ;)

For many, this is the Galician dish par excellence and is appetizing and perfect meal for this time of the year. It is a simple dish that consists of cooking the lacón (the front leg of the pig) along with the potatoes and, of course, the turnip greens, which are turnip shoots. The result is a strong dish that you can find, not only in a Galician restaurant, but throughout the entirety of Spain. The empanada is another dish that has a different recipe in each region of Galicia. Although the dough is usually the same, the filling is different: there are empanadas with "liscos" (panceta) and chorizo, zorza (chopped and marinated pork) and cod, which are typical of Lugo, lamprey, raxo (chopped pork loin) or xouba (sardine) in A Coruña, meat is typical of Ourense, and in Pontevedra zamburiña, a mollusc similar to a scallop, is a traditional filling. As you can see, there is no shortage of options and if you crave one particular filling you won't have to change provinces since these recipes are spread through the Community.

The Russian roulette of Galician cuisine. The popular proverbs says "“Os pementos de Padrón, uns pican e outros non” (small green peppers, some are hot, others are not), and everything is fine as long as you try ones that aren't hot, because when you try those that are, you won’t be able to reach the water before your face has turned bright red ;) Now, if happens and you still want to try an indelible part of Galician cuisine, you can't imagine how good they taste. Do you want full gastronomic experience satisfaction? End the cold and rainy season by trying a Galician broth and it'll boost your spirits. With a very simple recipe consisting of faba beans, potatoes, vegetables and pig lard, Galician broth is a perfect brew for the bitter cold in Galicia.

For a page dedicated to the Camino de Santiago, if we talked more about octopus a la gallega than tarta de Santiago it would be so illogical that it would contradict practically all the laws of time and space :D

Tarta de Santiago is a typical dessert from Santiago de Compostela that has made its way through the rest of Galicia. Its recipe consists of egg, almonds and sugar, and it wouldn't really be tarta de Santiago if there wasn't any sprinkled glass sugar on a Santiago cross.

To finish a meal or dinner, what better than a shot? If you want to go the traditional route, a shot of coffee liqueur is what you should order. Made from the maceration of coffee in brandy, this liqueur's strong and forceful flavour will be the perfect end to a gastronomic experience more Galician than the muñeira.

There you have it: ten of the main Galician cuisine dishes. If you’ve enjoyed this article, don’t hesitate to share it and let us know which dish is your favourite. We’re pretty hungry by now and are off to enjoy some octopus a la gallega ;)