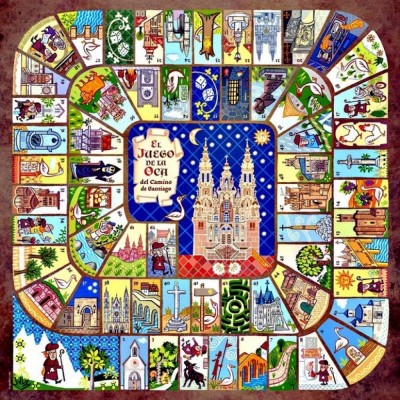 The Game of the Goose or Juego de la Oca is a very popular entertainment in Spain. It is a board game in which each player advances through a board according to their fortune with the dice. The snail-shaped board is made up of 63 squares and the winner is the first one to reach the last square, called the Great Goose.

Today we delve into this theory and we tell you the code behind these 63 boxes full of bridges, prisons and labyrinths. Like the Camino itself.

The origin of the Game of the Goose is uncertain. There are theories that suggest that it could be a creation of the Greeks during the siege of Troy. Its most remote antecedent can be found in the Phaistos disk, dated 2000 BC.

Another widespread theory is that it was born in Florence by the Medici, who spread it throughout Europe. It would come to Spain through a gift from Francisco de Medici to Felipe II, causing a furor at Spanish court.

But the theory that matters to us today is that of the Templar origin of the Game of the Goose. According to this hypothesis, the game was invented by the Order of the Temple, whose members were in charge of protecting the pilgrims who walked to holy cities such as Santiago, Rome or Jerusalem.

Following the Path of the Geese and the Stars

The Templar theory ensures that the goose would be a symbolic guide or an encrypted map of the Camino de Santiago Francés, the most popular of the time. The game of the goose is related to the so-called Way of Geese and the Way of the Stars, symbolizing a symbolic journey from east to west, like the Camino itself.

The choice of the goose is also not random. For the Templars, this animal symbolized wisdom and is very present in their entire legacy: from inscriptions with goose feet on some monuments to the cross in the shape of an 'and' like the crucifix of Santa María de los Huertos in Puente la Reina.

The importance of this animal is seen in the very place names of the Camino de Santiago with towns such as Villafranca de Montes de Oca, Castrojeriz (city of geese), El Ganso, Ocón, Puerto de Oca, Manjarín (man of geese) or the river Arga.

A round trip on the Camino

This encrypted map of the Camino de Santiago is divided into the 63 boxes that we all know today and that represent the stages of a round trip: from 1 to 31, the Route to Santiago. And from 32 to the end, the return.

In each of these boxes / stages a symbol appears, the meaning of which has not reached our days. But it had meaning at the time, since its origin is found in the markers that the master builders placed in the castles, fortifications, bridges, churches... that they were building along the Camino.

These were simple symbols, easy to remember and that did not attract attention among common people but that only those initiated into the Order of the Temple could interpret. Originally, the Game of the Goose was not reflected on a board. Its transmission was oral, hence the need for symbols to be very affordable for the person who was starting on the Camino de Santiago.

From the Puente la Reina bridge to the San Marcos prison

As we have said, the true meaning of the symbols that appear in the Game of the Goose has not reached our days. However, many of the illustrations are common in the pilgrim's daily life, so they could refer to real places on the Route.

For example, many voices agree that the first bridge on the board of the game is a clear reference to Puente la Reina. The prison refers to the Parador de San Marcos, in León, which was originally a pilgrim hospital and prison. And the inn can only refer to an element that is so typical of the Camino, such as inns or hostels.

The board does not only refer to physical sites on the Camino. It also appeals to sensations that anyone experiences during their pilgrimage to Santiago. The Game of the Goose has, for example, the well box, which could represent the bad days that appear along the Route.

The labyrinth could refer to possible losses, both physical and spiritual. Crossing the bridge would be equivalent to crossing the barrier that separates the terrestrial or the human from the celestial. And the dice, luck or chance of the Camino.

In Logroño, capital of La Rioja, you can see some of these boxes converted into Jacobean places such as Jaca, Puente la Reina or Santo Domingo de la Calzada. Where? In the Plaza de Santiago, on one side of the church of the same name. Its floor has become a great board that pays tribute to the Game of the Goose. If you pass through there during your Camino Francés, do not hesitate to try your luck.

Hopefully you liked this story and, if so, don't hesitate to share it. Buen Camino, pilgrims!