Markings in the houses of Santiago, a unique heritage to discover 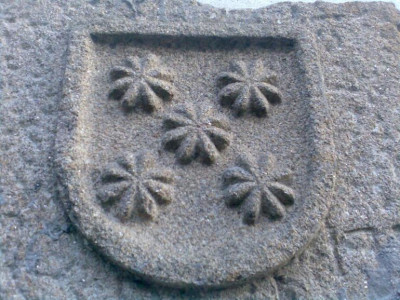 The origins of the markings in the houses of Compostela

In the Middle Ages, the popularity of the Camino de Santiago spread like wildfire, and the city grew rapidly in terms of population and size. Many houses were built to accommodate all of the new residents that arrived through the Camino or who came to look for work in a growing city. A real estate boom for this period!

Construction was expensive, and so houses were normally the property of civil and religious entities. Due to the complex renting system at the time, knowing who exactly was the owner of a particular property was a complicated task. The solution to this problem came from the authorities of Compostela: sculpt on the facades and lintels of their properties a symbol that everyone could clearly identify. This is the origin of around 200 markings of property preserved in Santiago.

They also had great symbolic power: everyone knew who owned property, what and where they were. It was a way for each institution to show power and authority. Knowing more about them helps us to understand how Santiago de Compostela worked in those times. 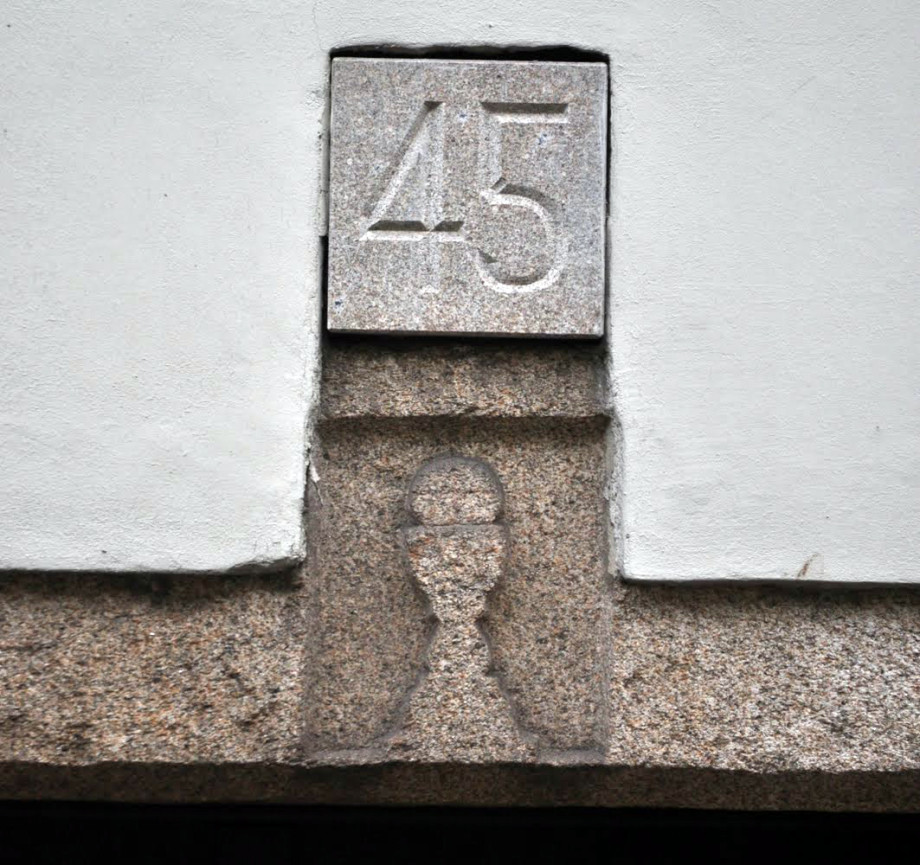 If you've travelled the Camino de Santiago, you already know that the chalice is a symbol inextricably linked to this route and to Galicia. Due to the legend of the Holy Grail of O Cebreiro, the chalice, which already appeared in the heraldry of the old Kingdom of Galicia, became part of the official flag, and is also featured in the crest of Santiago de Compostela. When you see this symbol in a house, it means that its owner was the Concello of Santiago. You can see the chalice in several houses in the Galeras area and also in the neighbourhood of San Pedro and in the Rúa das Rodas. 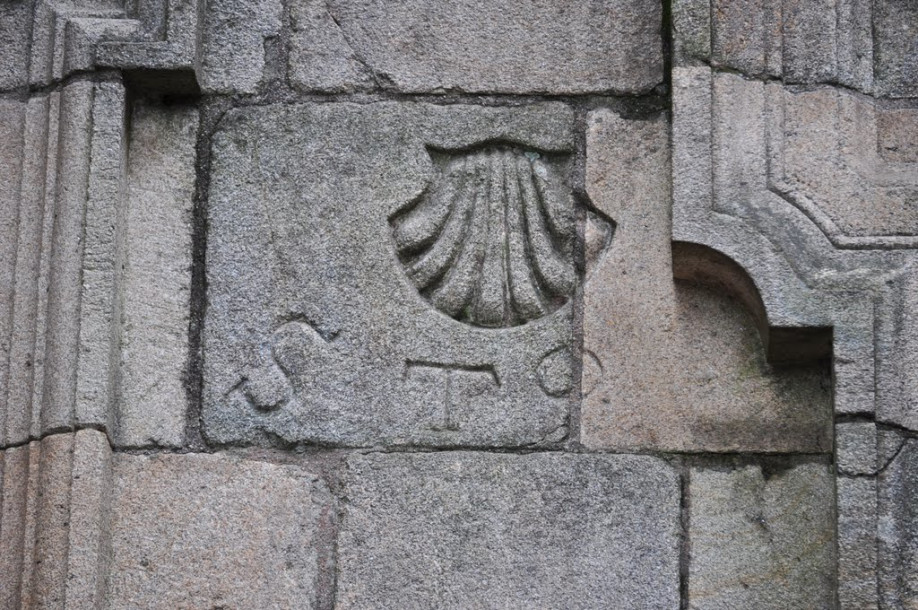 It is the marking that stands out the most to pilgrims, both the symbol itself that is identified with the Camino and the fact that it is the most numerous and commonplace in the old district of Compostela. The buildings, marked with the scallop shell are many times accompanied by the initials STO, belong to the Cabildo of the Cathedral of Santiago. The large number of houses that bear these markings indicate the power that this institution had during the golden age of the Camino and the city of Santiago. 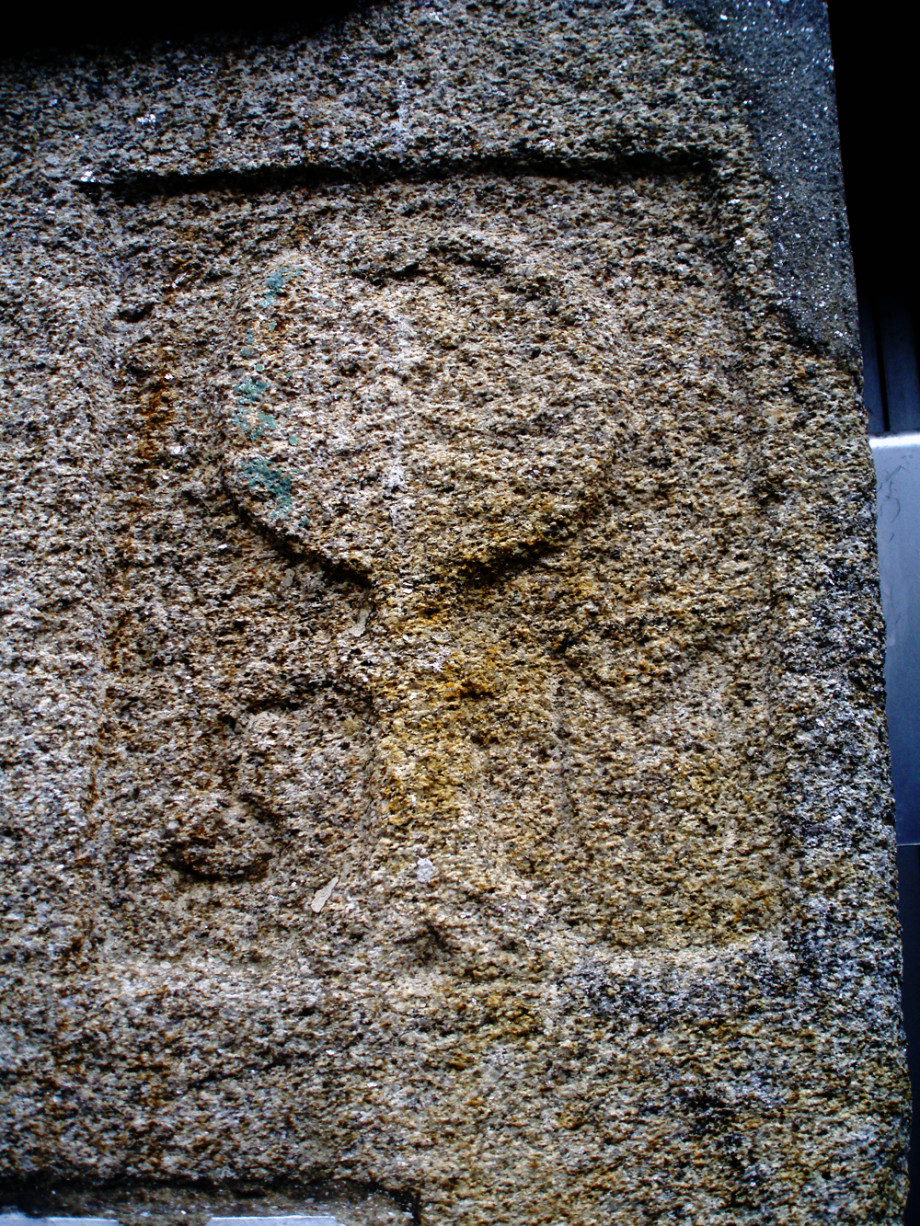 Another symbol that you'll see wandering around Santiago, especially if you walk through the neighbourhood of San Pedro, is a pine tree flanked by the letters SM. This marking is from the Benedictine monastery of San Martín Pinario, which became the most prosperous and powerful monastery in Galicia. The name Pinario apparently comes from the large number of pine trees that were on the plot where the monastery was built. 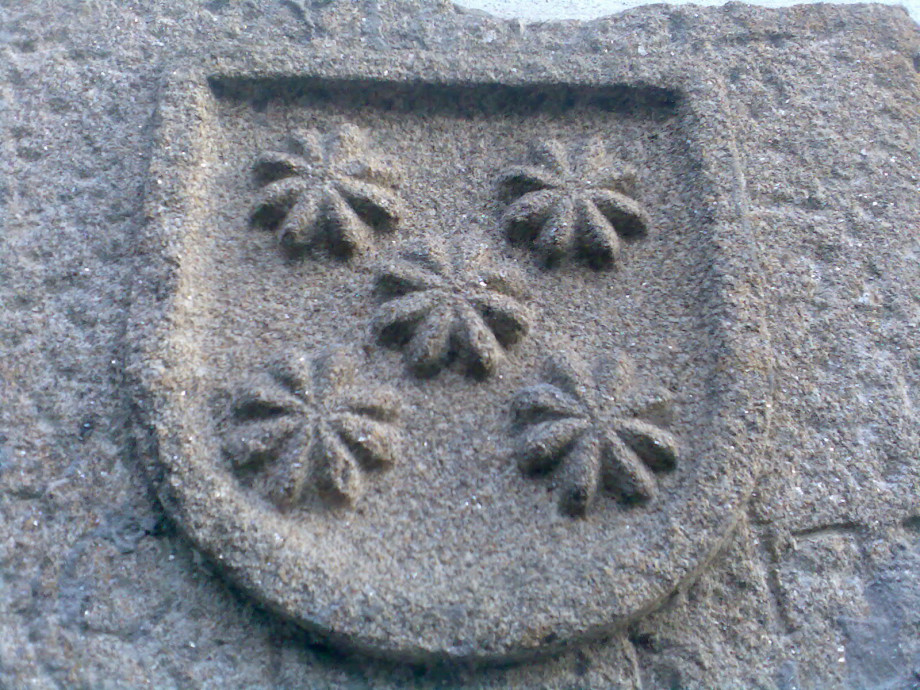 This crest with five stars is really that of Alonso de Fonseca, one of the main drivers of the University of Santiago. Over time, the symbol moved away from the surname and came to represent the famous academic institution. On the way to the Pilgrim Office, on the same rúa Carretas, you’ll see a good number of houses marked with this icon. 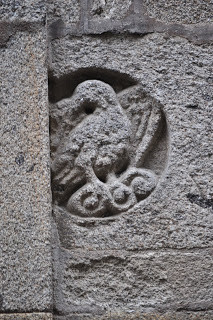 The dove is a common symbol in Christianity as it represents the Holy Spirit. In this case, buildings bearing this marking were the property of the Brotherhood of the Holy Spirit. This religious group, whose seat was within the same Cathedral, was founded in the thirteenth century and was active until the eighteenth. There are not many houses that have this marking, and they are somewhat scattered: there are some in the alleys between the rúa Casas Reais and the Cervantes Plaza, another can be found in the Praza da Universidade, a couple near the Alameda. Look carefully to find them! 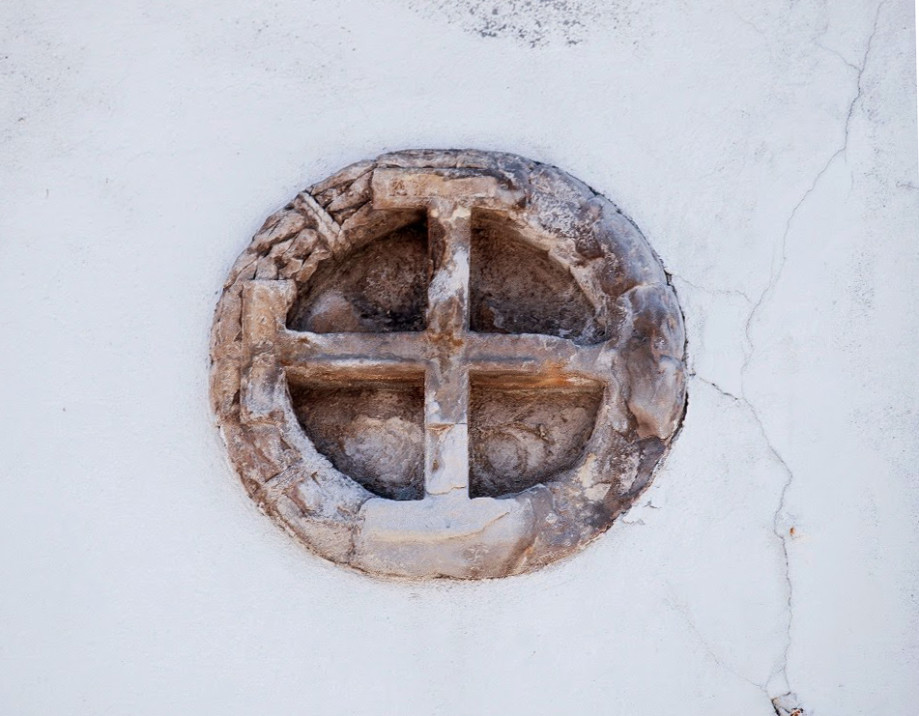 In a city like Santiago, there are many crosses...but look carefully and you'll notice that they are different. Does this remind you of something? It is known as the potent cross, and with a little more embellishment, it is similar to the crosses you can see in any hospital, health centre, pharmacy, etc. Here it represented, of course, at the Hospital de los Reyes Católicos, located since its construction in the Praza do Obradoiro. You can also find them in some nearby houses.

The other 'landlords' of old Compostela

Another major religious power in Santiago was the Dominican Order of San Domingos de Bonaval, also founded in the thirteenth century, which today houses the Museo do Pobo Galego (definitely worth a visit). It is symbol is the dominica cross, a hybrid of the Greek cross and fleur de lis.

The cross and the bars

This marking belongs to the Order of Mercy. The bars refer to Catalonia, where this order was established in 1218. In Santiago there are two seats: the convent of Santa María la Real, in the neighbourhood of Conxo, and on Virxe da Cerca, near the Abastos Market. The latter can still be seen today.

Did you enjoy the history of the property markings of Santiago? Share this article and look out for markings when you arrive...or when you come back to visit us ;-)

Comments
Robert
Great article really impressed . I think you should also write article about decorative cornice manufacturers . This will be beneficial for others I guess thank you.